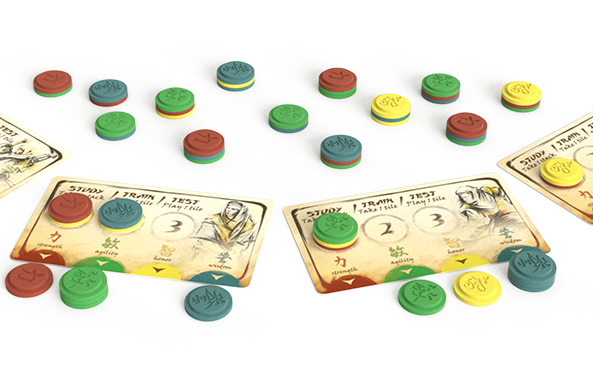 Does the fast abstract game stack up?

Of the four traits crucial for warrior-monks to train in during a round of Senshi – strength, ability, wisdom and honour – Dan Manfredini’s set-collecting game excels in agility. But it’s lacking strength, causing an honourable attempt at an interesting game to fall quickly out of memory.

It’s a shame, as there’s no lack of promise here. There’s the purity of Manfredini’s rules, for example, in which players either collect the coloured tiles symbolising the attributes – either as a complete stack onto their player card, or singularly from the top of any stack into their hidden hand – or play a disc from their hand to one of the four scoring piles, with the tricksy complication that every player gets the opportunity to cash in any matching top tiles from their stored stacks at the same time. It’s a simple idea that leads to a wait-and-bait tension between players, as you try to diminish their stacks and set up your own high-value combos.

There’s also the neat Knizia-like scoring twist, where the player with the shortest pile is instantly eliminated – even if their tallest stack would have won the game. It makes balance key (especially in a two-player game, where the rule still stands), and forces players to constantly diversify and shift their attention between sets.

The gameplay and the scoring both have clever, interesting facets to admire, and Senshi’s 15-minute sprint (often less) means it rarely sticks around long to wear thin. On paper, it’s a hit – so why is it that in motion it’s so utterly… forgettable? The design is functional, the theme fleeting but unobtrusive, and there’s enjoyment to be had in the pure strategy, yet Senshi never sparks anything beyond a plain appreciation that it’s a well-enough-made game. Plus, the unnecessarily overlarge box means that you’d never sacrifice another nippy filler only to leave this gathering dust in your collection.