Can this fantasy wargaming newcomer take over the Warhammer crown?

The influence of X-Wing on the Runewars Miniatures Game is clear as soon as you open the box and are presented with dials to pop together, mini upgrade cards and curving cardboard movement rulers, all of which harken back to the fantastic Star Wars dogfighting spin-off.

Runewars aims to be the next small step into the deep depths of tabletop wargaming for players who have found themselves seeking more weight than X-Wing, but without drowning in the pedantic checking of rules in heavy tomes and exhaustive multi-hour battles that have become the stereotype of the genre. Mostly it succeeds – although not without losing some of the magic formula that made X-Wing such a hit to begin with.

One of the most divisive decisions publisher Fantasy Flight has made is to embrace the makey-doey elements of miniatures, providing all 48 of the Daqan Lords and Waiqar The Undying forces in small plastic pieces that will require, yes, a) gluing together and b) painting.

The models took me around an hour and a half to stick together, with very little room for confusion or error thanks to the limited number of components – three or four separate bits at the most – and separation into bags for each character, meaning you can build a whole platoon without having to hunt around and wonder if one specific tiny head fits on a particular miniscule pair of shoulders. 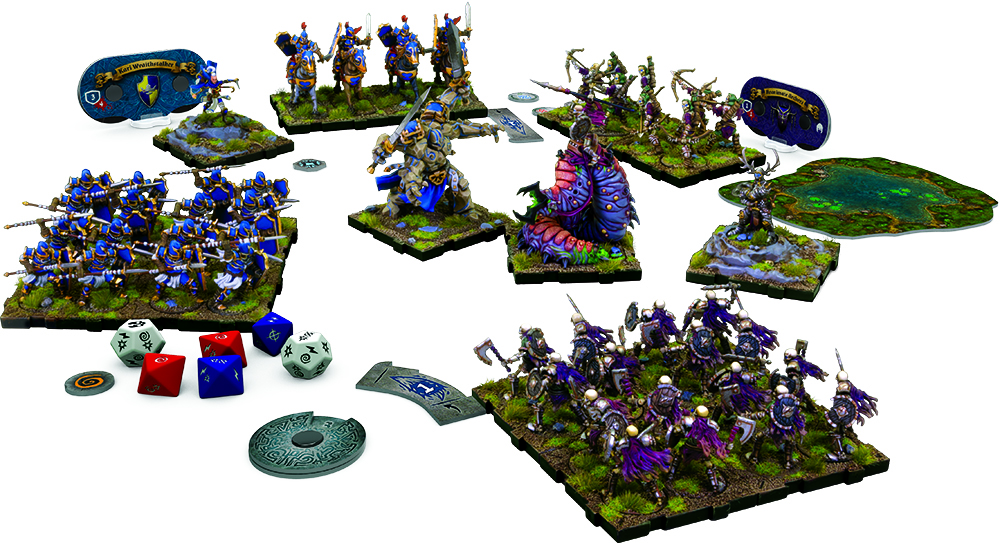 Although the models’ sculpts perhaps don’t quite match the quality of miniatures at the hardcore end of the spectrum, they’re still very impressive. While it’s a shame that they come unpainted versus the attractive ships of X-Wing, the figures' lack of ultra-fiddly details means that even an amateur painter should be able to finish them to a more than acceptable standard given a few hours’ practice.

Especially impressive are the core set’s biggest models: the carrion lancer, a curling worm with a skeleton rider, and the rune golem, a four-armed rock giant dual-wielding swords. The lead hero for each side comes stood on a rocky pedestal, which lends a nice dramatic flair to the more powerful individuals – but they can also be slotted in among ranks of troops to increase their group strength.

Runewars’ battles take place in the world of Terrinoth, the setting for Descent, Runebound, BattleLore and the 2010 Runewars board game. An extensive lore guide booklet provides a fair amount of narrative padding to the universe and introduces the two factions in the box, as well as two clans set to arrive in future expansions. It’s an admirable attempt to establish Terrinoth as a fantasy domain to rival Warhammer or Middle-earth and get pulses racing for the reveal of new races, yet – outside of the same scattering of unique characters and details you’d find in any new fantasy creation – the setting just fails to excite.

The included learn to play guide provides an easy-to-follow introduction to Runewars’ combat, as well as giving surface-level explanations of the wider miniatures hobby, including collecting, crafting terrain and organised play. The core box itself comes relatively well-stocked, with two armies of reasonable sizes and unit varieties (infantry, archers, spearman, cavalry, heavies, heroes), plus cardboard scenery to use. One interesting touch is the inclusion of objective, deployment and terrain cards, which are chosen by players while setting up and provide a semi-random way to mix up the starting positions, environment and bonus goals of each clash when not playing a simple skirmish. 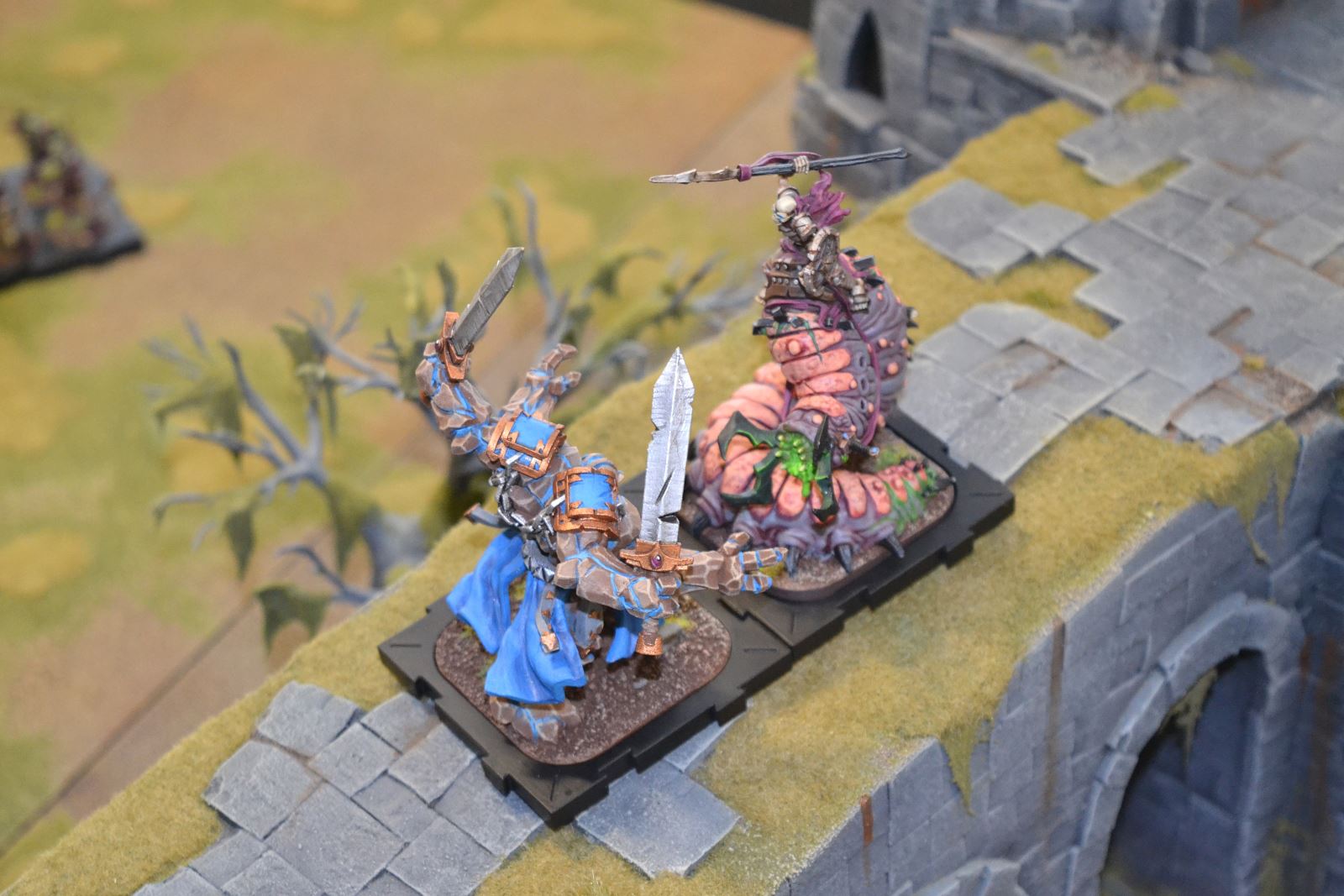 Dual sets of dials for each unit drive the core gameplay, with players selecting an initial action – such as movement or attacking – on the left before applying a modifier on the right, from charging into battle to avoid panicking units to performing special abilities. The results are colour-coded, making it easy to tell which skills can be combined together while also dictating the initiative and turn order of units.

It’s an incredibly simple system that works wonders to streamline orders that would elsewhere involve minutes of checking minutiae in rulebooks. All dials must be locked in before any units execute orders, which requires greater consideration of where your rival’s troops may be by the time your own armies move – this can be frustrating for newer players, who may not be aware of what their enemies are able to do or which characters will be able to act faster depending on their chosen action, while more experienced players may be able to adapt their strategies by remembering the potential initiative of each unit.

All of Runewars’ systems work to break down complex wargaming concepts to their basics, from the effects of morale, which becomes as easy as drawing cards when panic occurs, to so-called ‘boons and banes’, which tend to be represented as tokens applied to units and each have one or two very easy effects – remove attack dice, restrict movement, ready exhausted upgrade cards and so on. A set of double-sided energy tokens are cast randomly at the start of each new round and can provide temporary buffs to units’ stats, keeping tactics somewhat unpredictable and dynamic.

The X-Wing-like series of set-distance movement rulers fit neatly into the side of the trays of models, making it easy to move units around the table. Purists might argue about the accuracy of using such templates, but we found it to be no less specific than judging a tape measure. When opposing trays collide, they are immediately squared up to their closest edges – flanking provides the choice of an extra combat die, so there’s no arguments about specific angles and whatnot. 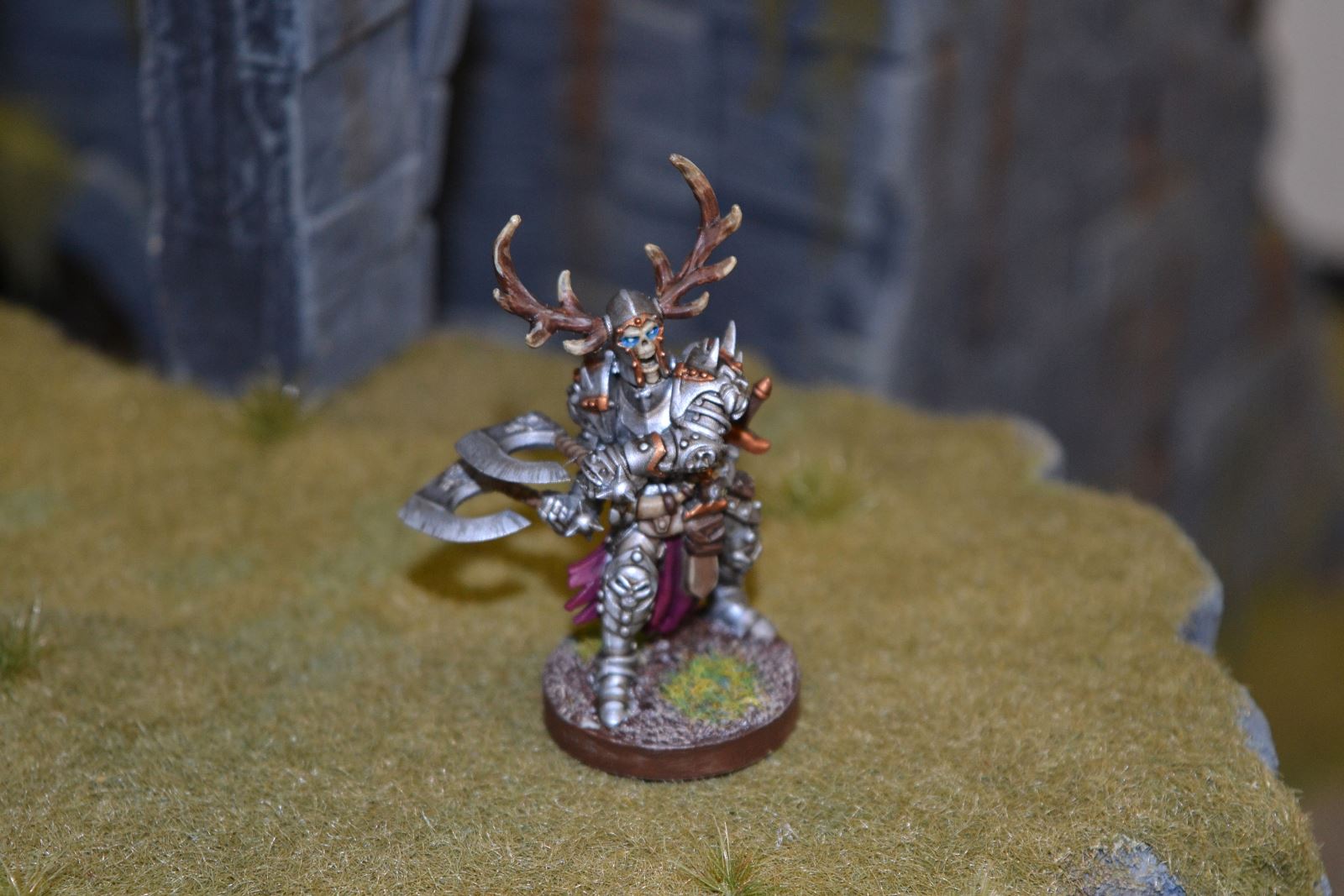 Attacks are resolved using custom dice, with troop cards dictating which of the increasingly powerful dice are rolled. The rank-and-file format of the interlocking trays is used inventively: width dictates damage dealt on hit rolls, while depth offers re-rolls, presenting plenty of tactical consideration and variability while preparing armies. Although, the fact that the trays lock together can also be frustrating when you need to remove figures or an entire square, as they don’t always separate too easily.

Surge results during attacks provide the chance to employ characters’ more powerful moves, which are great fun – but can be devastating when used against you. Even the more powerful characters aren’t invincible and will fall after a few lucky strikes, but as matches end and are determined by points after eight rounds, knowing when to flee is as important as going down fighting. The built-in finale neatly keeps matches a comfortable length, topping out at an hour-and-a-half tops, but coming in closer to 45 minutes with the core forces once both players find their footing.

Runewars has a lot going for it. The dial-driven systems are fun and make understanding and executing more complex strategies fast and very easy. The models are of high quality and – although the basic infantry is a tad boring – the heroes and bigger creatures are original and exciting, especially if you have the chance to paint them. The starter kit includes a healthy platter of components to welcome newcomers into the miniatures scene and the core gameplay is strong enough to hold up session after session.

The concern is that the game falls in an awkward gap between the fast and furious tight action of X-Wing, which also has the benefit of beautiful pre-painted Star Wars models, and more full-bodied wargames such as Kings of War that feature deeper mechanisms and proven longevity – after all, if you’ve stepped up to Runewars and enjoyed the taste of wargaming, why stop there? It’s a gap that I’m not sure Runewars manages to climb out of, despite its best efforts. It’s a very well-made miniatures game that lacks the personality to step out from under the shadow of its peers.

Runewars is fun to play and does a fantastic job of offering a deep, satisfying wargaming experience in a newbie-friendly package. The problem is that it’s hard to imagine sticking with it rather than moving on to deeper offerings or going back to X-Wing, making the investment harder to justify.