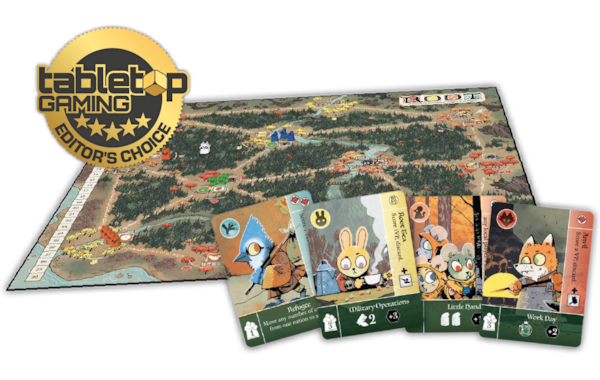 Choose your side in an all-out woodland war

Appearances can be deceptive. Root, for instance, with its smiling, saucer-eyed woodland animals, looks like it might be a nice, gentle game of woodland chicanery, but it’s actually one of the most grimily-satisfying anything-goes free-for-alls since Kemet.

Root’s influences are obvious: equal parts Redwall and the latter stages of the Vietnam War. It’s a salutary lesson in the futility of empire-building, a brutish quagmire which is only won on points, never by knockout. And no matter how cute it seems, it’s a game of slaughter in shades of grey.

The Marquise de Cat is a feline despot who has recently conquered the forest and wants to turn it into an industrial powerhouse. She starts with occupying forces all over the board and wins by building infrastructure. She’s opposed by the former rulers of the forest: the Eyrie, a proud, sclerotic aristocracy of birds which slowly snowball in power through careful play, provided they don’t depose one another and have to start all over again. Then there’s the Woodland Alliance, an insurgency which doesn’t start with any board presence and wins by building sympathy in the forest, revolting behind enemy lines and murdering all the occupiers. And in a fascinating piece of design, the fourth faction is the Vagabond, who wanders the forest playing the other sides against each other.

Each side battles for control of forest clearings in a totally distinct fashion with nothing more than a few tokens, a deck of cards in four suits and a fistful of meeples representing bloodthirsty forest creatures. What ensues is constant struggle that rewards daring play and makes a mockery of turtling.

True asymmetry is extremely hard to get right, but Root manages it with style. The four factions feel so genuinely different it actually becomes pretty hard to teach the game, because little beyond the core concepts are shared. So different are the sides that it practically feels like you’re playing a different game with each – and they’re all rewarding. While it does mean that significant rules errors are easy to commit at first, once it comes together it’s a remarkably subtle experience among four players who all know what they’re doing, despite its whimsical exterior and Kyle Ferrin’s gorgeous, idiosyncratic art. In fact, it’s no stretch to say that the designers could reskin the game in mid-noughties desert camo and set it in Fallujah without any mechanical changes whatsoever.

As well as vicious, though, Root is quick. Your first playthrough might take two hours, but once everyone is familiar, each game is played to a brisk 30 points and done in around an hour. And because it’s such a feast of strategy, you’ll want to play it several times in a row.

Root isn’t without its flaws. The Vagabond can at times feel stronger than the other three sides, while the Eyrie is a much swingier faction. Each turn they increase the number of moves – recruit, move, battle, build – they’re obliged to make if they don’t want civil war, and it’s easy to play yourself into an unwinnable position with bad planning or bad luck. On top of that, while Root scales to two or three players, it’s optimised for four, which represents a complex web of checks and balances on each faction. It’s fine with two and decent with three, but it’s only a classic at four.

It’s an absolute blast to play, but it’s not forgiving to new players. Leder Games has thoughtfully included a walkthrough mode for new players, but without witnessing how the parts interlock, it still leads to a frustrating first game of trial and error.

Don’t let its adorably bucolic exterior fool you. Root, like nature itself, is red in tooth and claw. 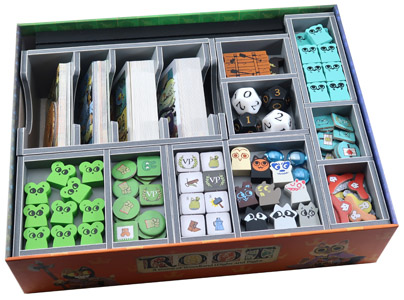 Compatible with Root®, and The Riverfolk®, The Underworld®, The Exiles & Partisans Deck®, The Vagabond Pack® and Resin Clearing Markers®.