Gaming for your life

Game shows are a unique, weird creation of the 20th Century. They all share a common DNA – contestants playing a game for some kind of reward. As we all know, the best possible prize? The opportunity to survive. This upping-the-stakes concept has been demonstrated in Hollywood in shows such as The Hunger Games and Squid Game. Room 25 Ultimate joins their ranks as a fictional game show where contestants compete to avoid a gruesome end.

Characters are placed in a five by five grid of rooms, each filled with difficult, dangerous or deadly challenges. Think The Crystal Maze, but with chainsaws. The win condition for each scenario? Find the final room – Room 25 – and escape. Each time you play, the layout of rooms is randomised, and in advanced rules, the rooms themselves change. Players might find themselves in an empty space, or blinded in the pitch dark – perhaps hacking a robot control area then next burning in a murderous fire furnace.

Players choose their actions in advance, programming one to three before the round begins. Each Player then reveals one at a time. This is an efficient way to remove analysis paralysis, with little down-time waiting for your move. The actions themselves are simple: Look, Move, Push (another player), or Control. The need to program your move adds an interesting twist to decision making – you have to respond after-the-fact to other players and to the AI of the complex itself. Thanks to the MAC (Move Alone Complex) cards – and to players taking the Control action – whole rows of rooms will shift around, making a mockery of your planned moves.

At its best, Room 25 is a moderately light puzzle to play with (or against) your friends, with flashes of madness, laughter and frustration. When I used the Control action to flip my room to the other side of the map, completely ruining my friend’s turn? When the MAC cards shifted a column and my only remaining options were to jump into a furnace or blind jump into an unrevealed room? Those were the moments where Room 25 delivers the tension and comedy of a game show. 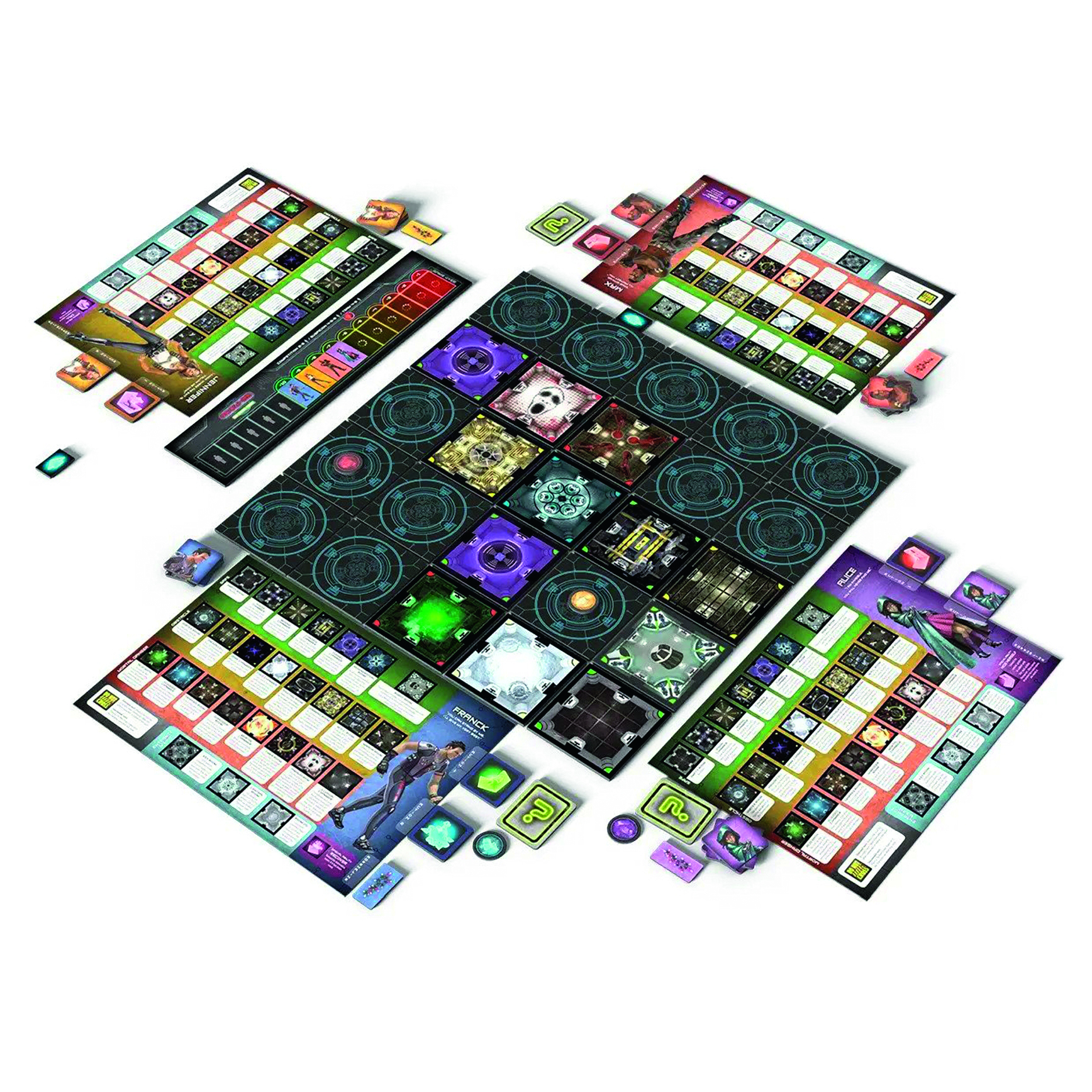 More often though, Room 25 lacks tension. Game shows like The Floor Is Lava and Taskmaster work by throwing together groups of people into repeated bite-sized challenges; but the key is that those challenges are, well, challenging. A little too often in Room 25, our response to landing in a room was ‘Oh, fine’. Programmed moves, often catastrophic in classic games like Space Alert and Robo Rally, also have less consequence here; for example with “move” you aren’t committing to move left, just to move in general. Even when things shift unexpectedly around you, it’s rare there isn’t still a safe place to move to. Even though you are meant to be entering rooms filled with poisonous gas and chainsaws, the only real drama is in your race against the turn clock.

Niggles aside, if the central concept of Room 25 Ultimate works for you, there is plenty of replayability included – the box includes co-operative, competitive & team modes, multiple difficulty levels and optional Special moves for all characters.

A fictional game show where players use their wits to survive against in a computer controlled mad-house. A lightweight puzzle, but crunchier or adrenaline seeking gamers may wish to look elsewhere.

TRY THIS IF YOU liked Specter Ops…

And if you want to pick up a copy of Specter Ops, click here!

…Spectre Ops is the better game, but Room 25 swaps its hidden movement map for a shifting grid of uncertainty, and forces you to trust no one - thanks to always-spicy secret traitor mechanics.