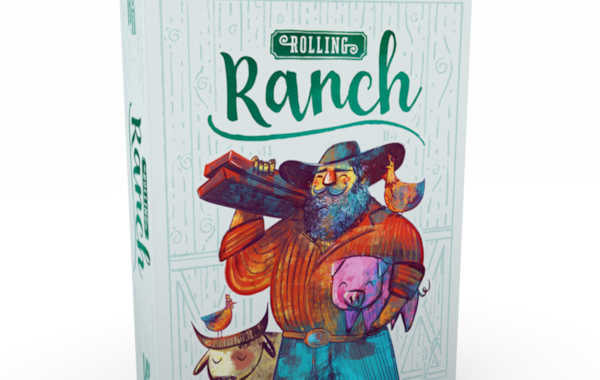 When Dorothy and Toto got swept out of Kansas and into Oz, you can only wonder what the remaining family thought of the now empty farmland and their livelihood. Wonder no more, Rolling Ranch is themed around awakening to find your farm has fallen victim to a hurricane and has wholly disappeared overnight. Leaving you to rebuild it, roll and write style.

You’ll do this by rolling two dice each round. These dice contain numbers, animals, and equipment for you to select from, as well as the opportunity to breed your animals, which you’ll write onto your Ranch sheet in each turn. You’ll get points for how well your development turns out, and how quickly you succeed. Ultimately, you’ll need to gain the most points to win.

There’s nothing offensive here, it’s a pleasant and innocent premise, the roll and write mechanic works, and there’s a nice addition of being able to gain additional powers from buildings assembled. The contrast in colours on the sheets makes it clear to see and use, and the box is pleasing as a set up for a dice tray. Whilst there were some questions raised during play that weren’t addressed within the rules, it’s still perfectly playable around this.

However, where roll and write games are admittedly a laid back genre, Rolling Ranch is so laid back it feels horizontal. The game lacks tension throughout, meaning winning or losing garners the same outcome: a resounding ‘meh’, and without the drive to play again. Even the bonus cards, which give you additional points if you hit certain secret goals, don’t provide much excitement – the reward you get simply isn’t high enough to warrant using them in most instances.

Rolling Ranch ticks a box as a roll and write for those who are looking for a quick to play one, and is a reasonable price as a short term game – one to play once or twice and not feel cheated – but unlikely one you’ll reach for with any frequency.