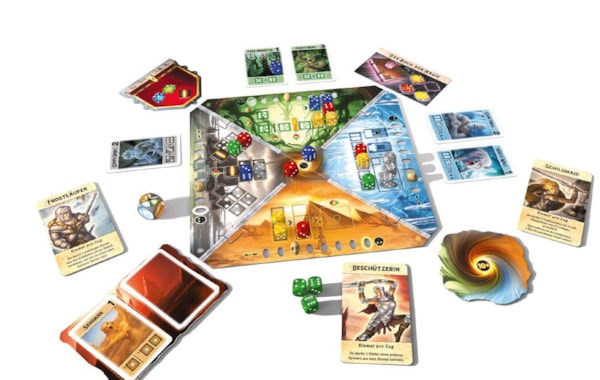 When fantasy questing gets a bit dicey

The Old Kingdom is in trouble. The Master of Shadows is coming to plunge the land into darkness, with his monstrous horde rushing ahead of him. The only thing that can stop this Sauron-esque big bad is a fabled magic item, which must be powered by a set of powerful, Infinity Stone-a-like gems, hidden away in looming fortresses, searing deserts and gnarly forests. That, and a hell of a lot of dice rolling.

Roll for Adventure hardly breaks the fantasy-quest mould. Indeed, as visualised by German publisher Kosmos, it’s a bit of a throwback theme wise, with so-so '70s kids’ storybook-style art and a disappointing lack of diversity in its depiction of the 10 playable heroes. (there’s an even gender split, but can we please stop treating medieval fantasy as a whites only genre?) Fortunately, once you get past that, there’s much to enjoy in its quick-play, light strategy but challenging co-operative mechanics.

Each player has five dice, which they must roll and place in a variety of ways. Perhaps to contribute to an effort to hack through the forest (which requires a long string of fives or sixes), or hammer at the fortress walls (needing four each of twos, threes or fours). Or maybe venture into the Ice Cave, where you can place to unlock bonus dice. To complicate things a little, only one number can be chosen and placed, before the remaining dice need to be re-rolled, repeating the process until each player has emptied their pool. And depending on how they dice are placed, that pool may become perilously depleted.

Further complication comes in the constant onslaught of monstrous enemies – one drawn at the end of each turn. Other than the shadowy big boss, each can be killed with a six (or a combo of placed dice adding up to a six), and really should be before they do too much damage, either attacking their relevant territory, losing you the game if its ‘health’ falls to zero or consigning placed dice to the ‘Vortex of Oblivion’. Oh, and that’s another way dice can be placed: into the ‘Vortex of Resurrection’, until a total value of 10 is reached, and all obliviated dice are returned.

There are a lot of options for each player, which can lead to some enjoyably knotty decision making, geared towards maximising team effort. Would it be better to push on through that forest to secure a gem,
knock that troll on the head before he trashes the Ice Cave or toss a cube into the Vortex of Resurrection to give the dice-starved next player something to actually do on their turn?

Variable hero powers add a little spice, while designers Matthew Dunstan and Brett J. Gilbert, the team behind last year’s excellent Raids, build in longevity and difficulty escalation with optional special monsters (dragons, phantoms and giants) and trickier dice-placement challenges on the territory boards’ B sides. Although the base game is challenging enough especially if playing as a family, which Roll for Adventure feels made for.

Like all great co-ops, it takes balanced, focused teamwork to bring that big, shadowy bad guy down. Just like in that big fantasy trilogy we read once. You know the one…