'Although, the biggest mystery remains how Fishing and hunting parrots gives you bananas..'

Robinson Crusoe: Adventures on the Cursed Island is still one of the best exemplars of co-operative board games where theme cannot be separated from gameplay. The survival game is tough and unforgiving, but winning usually brings cheers, sighs of relief and fist pumps all round.

With its strong thematic links, Robinson Crusoe’s gameplay is based around a number of island survival scenarios, completing which will essentially end the game – although this can take a while, making replayability fairly good. That is until, of course, new ones can be added. This is where Mystery Tales, the game's second expansion, comes in, delivering a whole new ‘horror’ mode and full-blown campaign with progression across multiple playthroughts.

There are plenty of new scenarios, cards, events and treasures in the box that will continue to bring one disaster after another into the already not-so-idyllic island life. Horror mode is particularly tough, adding more supernatural elements into the game.

The campaign is clearly inspired by legacy games, interweaving narrative breaks into the gameplay and allowing players to make story decisions. However, it is a little bit half-baked, not completely committing to the plot twists, permanent alterations or even secret-cards-hidden-in-the-box extravaganza that you might have come to expect from the genre.

What is most surprising is how little of the base game the expansion actually uses. The characters and majority of the decks are replaced rather than combined, essentially separating Mystery Tales completely from the original Robinson Crusoe. In a game that already has lots of bits that means a lot more bits, snowballing into a longer setup and organisation.

If you love Robinson Crusoe, it is hard not to be glad for more of it, especially when it comes packed with some fresh and fun gameplay twists. Although, the biggest mystery remains how Fishing and hunting parrots gives you bananas. 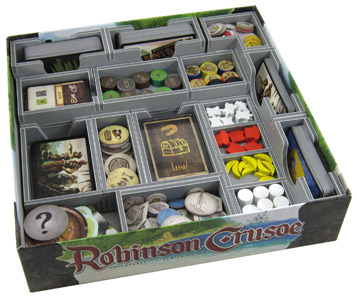 Compatible with Robinson Crusoe®, and the Voyage of the Beagle Vol. 1 ® expansion.