Is the follow-up to Blood Rage a worthy successor?

Rising Sun is a game that will make you go ‘wow’. From its table-filling main map, illustrated with eye-watering beauty by artist Adrian Smith, and towering monster ‘miniatures’ that feel suitably awing to the straightforward yet limitlessly complex area-control gameplay at its centre and, yes, even the more than $4 million it gathered from tens of thousands of backers on Kickstarter last year, it’s hard not to be bowled over by just how impressive Eric Lang’s latest showpiece feels.

That’s perhaps unsurprising given that Rising Sun is the offspring of the designer's equally epic (and revered) spiritual successor Blood Rage and gloriously brutal classic Diplomacy, pitting players against each other in a cut-throat battle to rule feudal Japan by deploying their troops across the lands and attracting the aid of legendary monsters and god-like kami. (This is by no means a game for those after historical realism or cultural accuracy.)

Driving the action is a tight set of political mandates that are played one at a time each turn, granting a bonus to the active player (and their ally) and a lesser version of the same move to everyone else, à la games such as Twilight Imperium. The balance of having direct control over your limited selection while adapting to the other players’ decisions makes for a deep but easy to understand loop, as choosing when to move your units into a particular region or even betray an allied clan to gain extra power becomes vital.

Ah, yes, betrayal. Forming partnerships is baked into Rising Sun, as each round kicks off with a tea ceremony where clans can offer gifts (or bribes) and pledge their friendship to another faction, slotting together two tiles to mark the bond. Having an ally can be extremely beneficial in order to gain extra bonuses during the political phase and avoid costly battles, but alliances are never permanent, ending at the close of each round. This natural fluidity of alliances means that turning on your former partner to gain an extra couple of troops never feels like something that could result in a flipped table, making it fun rather than infuriating.

After kami have been worshipped, troops positioned and alliances broken, war breaks out in a random selection of territories, with the need to constantly keep troops on the move to claim the most points resulting in a more dynamic competition than some area control setups prone to turtling.

Battles are resolved with a hidden bidding system between players that makes each clash a showdown of bluffing and prediction as they assign coins to hire ronin, take hostages or even commit seppuku, which means an army faced with defeat can still grab victory points and honour – an ever-shifting ranking of the clans that crucially breaks ties – before they’re wiped out. A small but significant rule is that the winner of a fight must pay their invested coins to the losers, which helps with future conflicts and acts as a very tidy balancing system. This, combined with the ever-present chance to team up with another clan trailing in the points tally for mutual benefit, means that Rising Sun never develops a runaway leader problem or the feeling that all is lost, right up until the final scoring.

Rising Sun may not have done its history homework, but it aces the overall exam with an intoxicating propensity for finely-tuned strategy and scheming that is never anything less than flat-out entertaining. It’s a beaut to look at, a delight to play and filled with moments that will have you playing ‘til the sun goes down – and then comes back up again. In short: wow.

Eric Lang has done it again with an impeccable area control game that is as stunning to play as it is to look at. The betrayals are entertaining rather than enraging, the strategy as rich as it is clear, and the fun non-stop. This Sun shines very bright indeed. 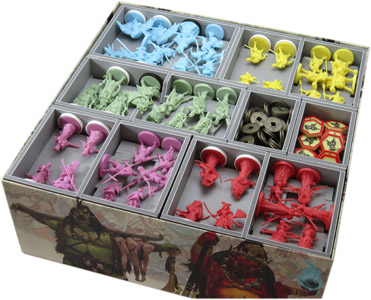 Compatible with Rising Sun®, both the retail and the Kickstarter editions.