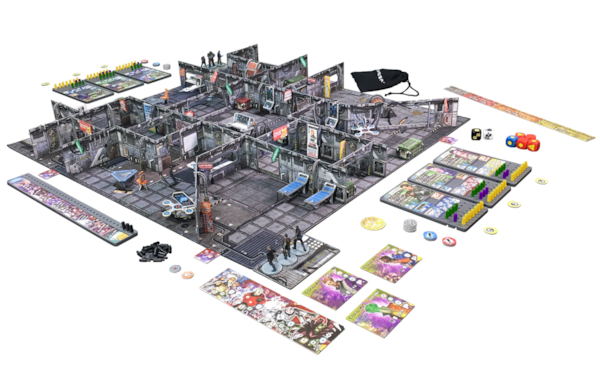 A spectacular hybrid of roleplaying and skirmishing

Core Space is a game best described as a hybrid of a miniatures skirmish game and dungeon-crawling RPG. Players control a crew of traders as they attempt to gather loot, complete various objectives and avoid the deadly Purge, either in a standalone scenario or as part of a larger campaign.

The action takes place on a decent quality playmat divided by modular 3D scenery, with each mission having its own unique layout. The game certainly looks impressive when it’s all set up, though the game’s generic sci-fi setting feels like a missed opportunity in terms of art direction. Whilst the board is gridded, traders and NPCs – the civilians and Purge miniatures – all move by ruler in inches and shoot using line of sight, making the moment-to-moment gameplay more akin to something you’d find in a skirmish-level wargame than a traditional board game. The grids are instead primarily used for as a reference point for laying out the scenery for each mission, though in practice they’re also quite useful for quickly eyeballing distance as well.

The need to clip together walls and fill crates with items means that setting up will definitely take a good 20 minutes to half an hour or so, particularly for the first few games. Your attitude to this fact will probably be indicative of whether you’ll like Core Space or not. The game is really best played as a running campaign, and it’s the sort of title that’s meant to be played over the course of a few evenings with the same group. (The core box has enough for two players, with expansions allowing for more.)

In essence, the action is divided between exploring and combat on the one hand, and resource and crew management on the other. The progression system has a very strong RPG element; each member of your crew not only comes with an innate skill, but a choice of different skill trees containing half a dozen or so different abilities apiece. On top of this, each ability often has a number of upgradable levels that have a different effect on your crewmember. Some items also confer their own abilities. It’s certainly an in-depth system, but its sheer size means it can often be a little overwhelming, and there’ll almost definitely be times you forget that one of your characters had a specific ability at their disposal. All the different variables also means that the box comes with a lot of tokens and such, which can be a bit finicky at times.

The only other major bugbear comes down to a few hiccups in the rulebook. Some of this is just a matter of slightly unintuitive layout, though there are a few outright omissions as well. For example, it’s difficult to find the rules that specify what order civilians should act in if there’s more than one, as well as how many health points each Purge unit or civilian has. Minor complications like these don’t derail the experience too much, however, as once you get started you find the game sequence to be fairly intuitive.

On that note, the gameplay has a nicely balanced level of risk and reward that helps create a sense of urgency. You often need to try and complete secondary objectives and gain valuable items to upgrade your crew or trade for cash. This is vital in a campaign, since as well as outfitting your characters to deal with greater challenges, you’ll also have to keep your ship maintained and have enough funds to deal with unexpected developments. However, the Purge are an omnipresent threat whose numbers increase as the game progresses, and things can go south very quickly if you’re not careful.

If you’re prepared to invest the time required to properly get into the meat of Core Space, you’ll find an entertaining romp with mostly intuitive mechanics whose gameplay clips along at a solid pace.