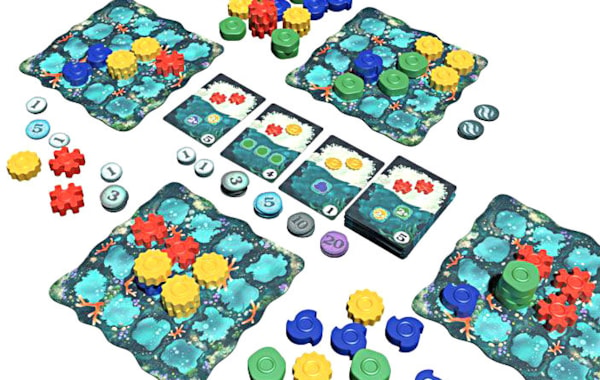 No Great Barrier to entry

If there was a board gamer’s guide for new and casual players, Reef would be solidly positioned at the top of the list of recommended games. It looks deceivingly basic yet, after only a few turns, what seems easy and even mundane expands to encompass layers of clever design hidden under simple ingenuity. More importantly, for us players, it is addictive fun.

In Reef, players – predictably – are building a coral reef out of four different Lego-like pieces. The theme is almost irrelevant, except it inspires the wavy shapes of plastic coral that look gorgeous on the board, especially towards the end of the game when the reefs are complete. Throughout the game, players are adding and stacking pieces on their individual boards to score points for particular patterns. Yes, you guessed it: most points wins.

From that premise alone, Reef sounds like many board games before it, repeating a trusted and well-tested formula. However, there is a reason for that: the formula works. Especially to non-board gamers or casual players, Reef is appealing through its bright playful components and straightforward gameplay. It is immediately obvious what you have to do and how you win the game. Gameplay is not overburdened with minute and fiddly rules, making it easy to remember.

What takes Reef from being an easy game to learn and to play, to one you will want to return to again and again, is the how the game makes you feel when you score.

In Reef, when a player puts down a card, they pick up coral pieces, place them on the board and – if they form a pattern displayed on a card – score points. Therefore, every turn players can set up a combination that earns them points. While that initially seems hard to do, as the game progresses and the players’ boards gets more overgrown with coral, it becomes easier to pull off scoring combinations. Chaining up several point-earning turns in a row is really satisfying and, although there are plenty of opportunities to do so, it always feels just challenging enough – but not so much so that players get discouraged.

There is an unexpected barrier to scoring. It is unusual enough that I hesitate to call it a design flaw, but after playing the game where several other players followed the same type of behaviour and it happened more than once, I am compelled to mention it. Players didn’t like to mix colours in their coral stacks. If they started with red coral, they would continue building upwards with the same colour, even if it cost them points in the long run. It seems that Reef's aesthetically pleasant design is almost to the detriment of its gameplay as players were unwilling to ruin the beauty of their board arrangement for a chance to win.

That surprising quirk aside, Reef is a delightful little pattern-making game. It may be uncomplicated and is definitely geared more towards new players, but none of these are to its detriment. Simple, but effective ideas work. Add to that visually stunning design and you have a little board game jewel.

Simple, beautiful and just challenging enough to add a drop of competitiveness into the gameplay, Reef is the definition of a perfect gateway game.