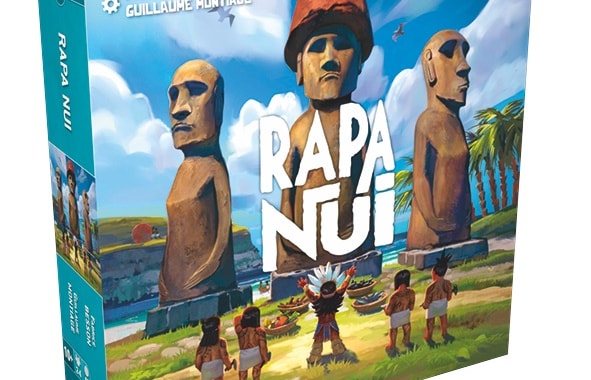 How to get ahead in statute building

In Rapa Nui players compete to erect giant statues, moai, collect resources and transform those resources into offerings, which earn you points. Each turn you’ve got a handful of villagers to work with. Want to build a moai? Great. Also, you might want some hair ready to pull out.

First you’ll need someone to quarry to sculpt your moai – the more villagers you send, the bigger the statue, and the more resources you’ll get when you put it up. There are limited spaces and a limited supply of statues, so you’ll want to get in early and claim those hulking po-faced whoppers before your friends grab them, right?

Well, yes, except they’re no good to you if they’re stuck languishing in the quarry. You need to get them to one of the ahu around the coast, those big stone terraces on which the moai stand. To do that you need a villager in every intervening space, ready to heave the statue overland. Now these don’t have to be your villagers, but if you use an opponent’s villager to transport your moai, they earn the resources marked in that space. This means it’s possible for other players to earn more from transporting your statue than you do from raising it.

So logistics are a hassle. Go for the nearest possible space then. The problem here is, as you get farther from the quarry, the resources you get for raising your moai become more valuable: reeds, eggs, wood and finally pearls. Wood and pearls let you recruit an extra villager or even a chief, a special worker who can visit the quarry even if all the spaces are full.

Right. Maybe forget raising moai then. Let’s just spread villagers all over the map and earn resources as a giant stone head taxi service. Well no, that’s not wise either, because every time someone raises a moai they earn a powerful one-off bonus depending on the tile that’s on that space. These give you anything from more resources to cheaper offering to just some extra victory points.

But not only that. The main way you earn points in Rapa Nui is by crowning statues with red stone headdresses called pukao. These don’t need a sculptor to create them but they need to be transported across the island exactly like moai, and then they need one of your villagers at the end of the bucket chain to place the pukao on the statue’s head. Then – and only then – you can finally swap a set of four resources for an offering tile, which is worth big points at the end of the game.

Rapa Nui is a reworking of an older title, but not – confusingly – Rapa Nui, the 2011 resource-gathering card game by Carcassonne designer Klaus-Jürgen Wrede. Instead it takes its DNA from 2008’s Giants – the board, the awesome moai figurines, the chiefs and sorcerers – losing the dice and bidding mechanics and remixing the rest into something distinct. I miss the original’s realistic resources (this version tracks them via cubes on your player board) but the moai are great, tactile components that feel fun to plonk down on their plinths.

For a game about erecting monolithic statues, your board presence feels oddly impermanent. Your villagers return to you at the end of each round, meaning all you hold onto are your resources, offering tokens and any upgrades you’ve purchased. But while you don’t get the satisfaction of constructing your own private statue garden, the flipside is a wonderfully dynamic contest of spotting opportunities and exploiting your opponents’ mistakes.

Be warned: there’s no catch-up mechanic. On the other hand, it’s quick – even if you get steamrollered, you’re done in under an hour. Aside from a couple of wrinkles, the rules are pretty simple, which makes for a fun, light-midweight game to round off an evening.

TRY THIS IF YOU LIKED Tammany Hall

If you like the sense of area control of Tammany Hall, but could lose the bidding, then Rapa Nui is a safe bet. It’s also less directly nasty, instead you’ll be hoping to exploit other player’s moves.