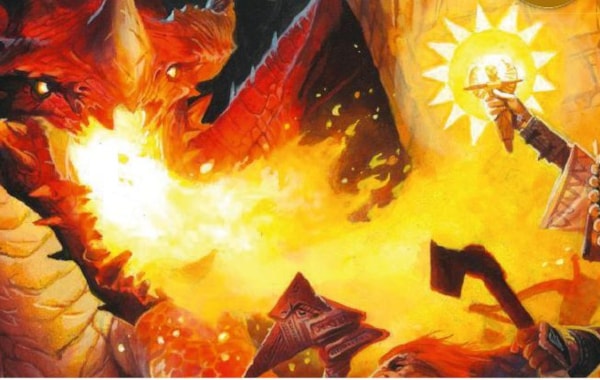 When you sit down to a game of Pathfinder: Second Edition it’s very hard to forget that you are, in fact, playing a game. Where other titles turn their back on complex rules and highly-tuned characters in favour of light touch storytelling, Paizo’s latest take on traditional fantasy adventuring absolutely revels in it – for better and for worse.

A great many people will see this focus on mechanics and raw numbers as an instant red flag. However, if you’ve ever sat down with an RPG character sheet and felt the urge to tinker until the rules on the page fit in with the badass you picture in your mind, creating and playing out your chosen hero can be unbelievably satisfying.

We say ‘hero’ there, because Second Edition is very much a game about larger than-life heroes setting out on magical fantasy quests. While you could certainly use it to weave tales of courtly intrigue or desperate wilderness survival, the heart of the RPG revolves around beating up monsters, exploring dungeons and extracting big piles of loot.

If that all sounds very familiar, that’s because – like its predecessor – this new Pathfinder is directly based on Dungeons & Dragons. Indeed, tucked away at the back of the core rulebook you can still find the text of D&D’s 19-year-old Open Gaming Licence. While it retains a lot of the touchstones that have helped define the genre, such as classes, spell slots and the d20, however, the developers haven’t been afraid to make a few sweeping changes.

Perhaps the most obvious of these is that the smorgasbord of action types available in earlier editions has been heavily streamlined. Rather than having turns divided up into distinct chunks, every character simply gets to do three things each round. Want to spend your entire turn sprinting across the battlefield? Go for it. Feel like stabbing a dude, raising your shield and then using it to smack someone else? That’s fine too.

While it can take a little while for players who cut their teeth on First Edition to adjust, this single change helps
combat flow a little easier. It also helps avoid the depressing moments where you waste a bundle of actions because there’s nothing useful to do with them.

More than a few of the game’s sacred cows have been sacrificed for this new edition, too. The noble paladin is no longer a core class, for example, having been replaced by the much broader ‘champion’. A character’s ancestry also plays a reduced role in choosing their class, allowing you to flesh out kinds of weird and wonderful concepts without sacrificing too much effectiveness.

In fact, this is one area where Pathfinder: Second Edition truly shines. There are plenty of games out there that other incredible choice when it comes to character creation, but it’s rare for these choices to be backed up with hard mechanical consequences. This means that the enormous blade being lugged about by the goblin barbarian isn’t just a reskinned longsword, it actually deals extra damage, while that pirate you dreamed up can find abilities helping her specialise in underwater fighting, climbing ropes and navigation.

All this minutiae and minor details come at a cost, and that’s complexity. Even first-level characters have a long list of abilities, powers and skills to pick from and, as campaigns stretch on and power levels climb, things can begin to get increasingly hard to manage. Much of the fun in Pathfinder comes from playing your character effectively, and doing that requires you to be on top of spells, special actions, focus powers, magic items and much more besides.

On top of this, the core ruleset seems absolutely determined to make sure that virtually every action a hero might take is codified, written down and measured. There are more than 100 words devoted to the rules for pointing out a hidden enemy to your friends, for example, with different mechanical results depending on how the dice roll goes.

Enjoying Pathfinder isn’t easy. It requires you to find real enjoyment in mechanics as well as roleplaying, a love of shameless heroism, and either the willingness to memorise a lot of rules or the confidence to ignore the ones you don’t feel like following. If you and your friends tick those boxes, however, it does an incredible job of hitting everything you could want from a brand new RPG.