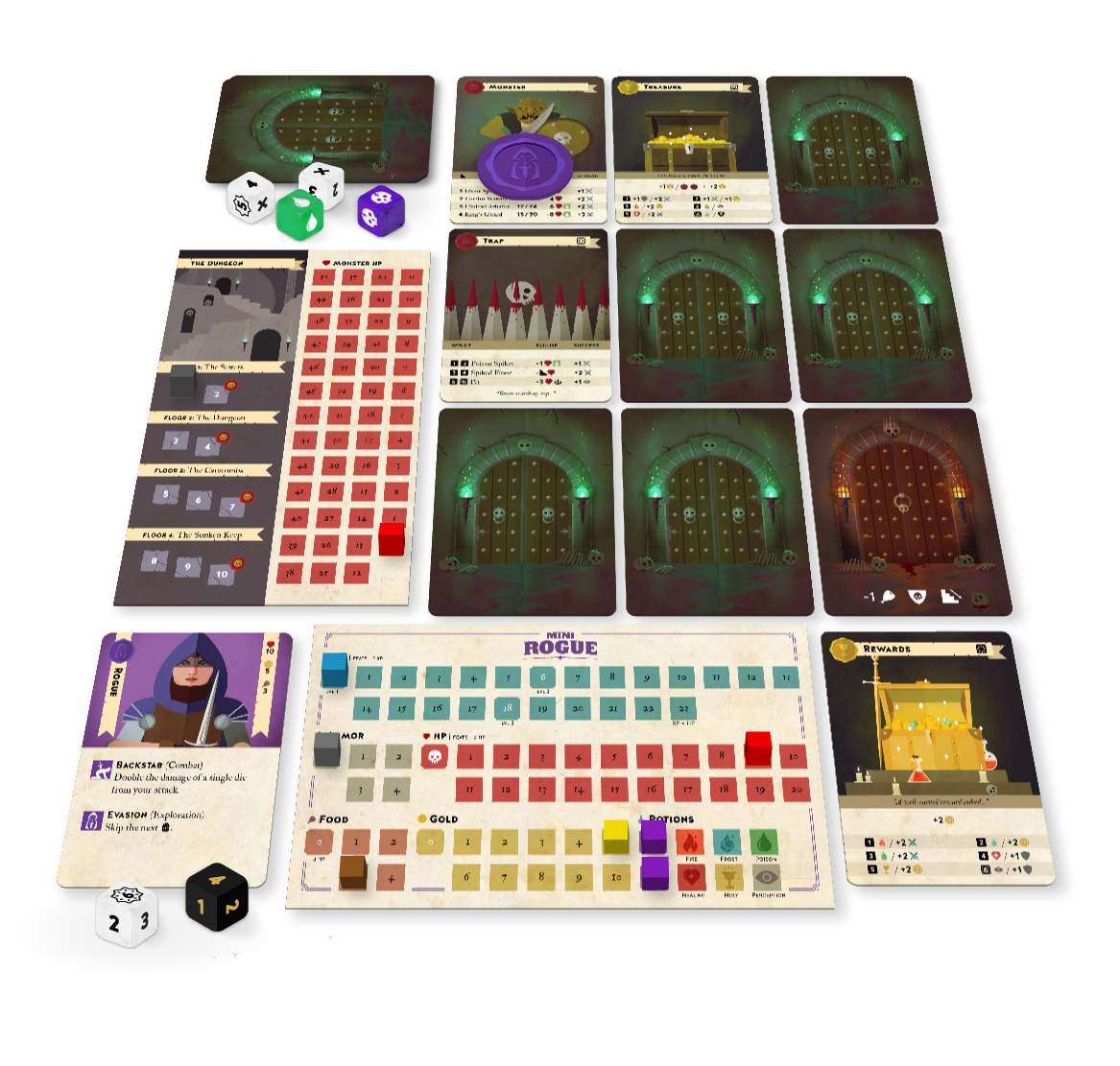 Roguelikes have had their meaning diluted. While in vogue for video games in the last decade, the term has simply come to mean a kind of permadeath – or as many of us would recognise from early games consoles, arcade mode.

Mini Rogue is more purely a conversion of games like Nethack – randomised dungeons, brutal and unfair spikes of difficulty, and most importantly, genuinely surprising moments. The thing players enjoy about these experiences is not that they die on 80% of their dungeon runs. It’s that for each room they explore, depending on its context, there might be a twist coming up.

Mini Rogue, then, does this in the limited format of a deck of cards and some cubes. Lay out some random rooms, place your marker on the top left, and you’re away. Explore a room, roll an adventure dice and a dungeon dice, and read what happens off the card. The adventure dice are your own D6 with fives and sixes representing success at whatever you’re doing. The dungeon dice represent what happens in a room, a failure and a four on the dungeon dice might mean losing hp in a trap room, but a success would net some experience. At an abandoned shrine, you might be able to change your dungeon roll by one with a successful adventure roll – dodging a vengeful ghost and getting some loot instead. And what if the floor gives in? Well, you’re going to consult your position on the dungeon depth tracker and move it to the level directly below. This can be an advantage (you dodged a boss) but is mostly perilous, as you’re suddenly reading the second or third row on the monster cards, and those monsters are much scarier.

Somewhere between a series of random tables for a roleplaying game, and tactical wargame in feel, Mini Rogue dishes out the laughs and lumps in equal measure. Actually, there’s probably more lumps if we’re honest. Dying-and-resetting is part of the genre, and there’s something really pleasing about a game session that really includes “oh, this is the run,” moments. Upgrading your dice through collecting experience points can give you the over-confidence that will send you right back to the start – exactly mimicking how most Nethack runs go.

When playing in the co-op mode, players upgrade enemy health and lose out on the advantages that come from the character improvement of campaign mode. Both of these modes are elegantly built on top of the core loop. The campaign mode lets players buy their way through a skill tree, giving you a better chance as you delve deeper.

While we have to say the game is not for everyone, it’s as close as you can get for a primarily solitaire game that models an archaic video game concept. Mini Rogue goes beyond its humble beginnings of a nine-card game into something really special. Like the best little games, it’s able to worm its way into your heart, and like the best solo games it’ll whisper to you from the dungeon-grate that “there’s time for one more…”

A brilliant exercise in dungeon delving just-one-more-ism – and for those looking for more, there’s expansions on the way.

TRY THIS IF YOU LIKED Bag of Dungeon…

If the lo-fi aesthetic of Bag of Dungeon is the only thing to keep you away, then the slick presentation and pleasing gameplay loop of Mini Rogue will make it your new favourite delver.