You probably know by now what you’re getting when you pick up a Villainous game. These popular Ravensburger outputs are quickly becoming a staple board game for many, where you’ll play as the villain from various Disney films, so that you might change the story and win for once. With the additional versions, you can play as a number of villains, from The Queen of Hearts to Dr Facillier, from Pete to Cruella and more. Plus now, apparently, Thanos.

Marvel Villainous is arguably a sequel rather than an expansion. Whilst yes, it’s contentious to call the others expansions as they can be played alone regardless, they follow the same pattern of the game as those before it. If you learn how to play the first, you simply add the new characters and motivations and away you go. Marvel Villainous is the ‘I’ve grown up and I’m moving out, but you can still do my washing’ of the expansion/sequel world as now there’s more rules, more challenges, and more time needed to play.

That means it’s a benefit to have played Villainous before – you may find it much more straightforward if you can recite the original Villainous rules as a template. In some circumstances, it’s tricky to determine what the game intends (and where house rules inevitably take over), where knowing how it worked or how you played similar quirks before does help. It’s no requirement though, and you could pick up this game and play a full and fun version having never championed Ursula the Sea Witch before. 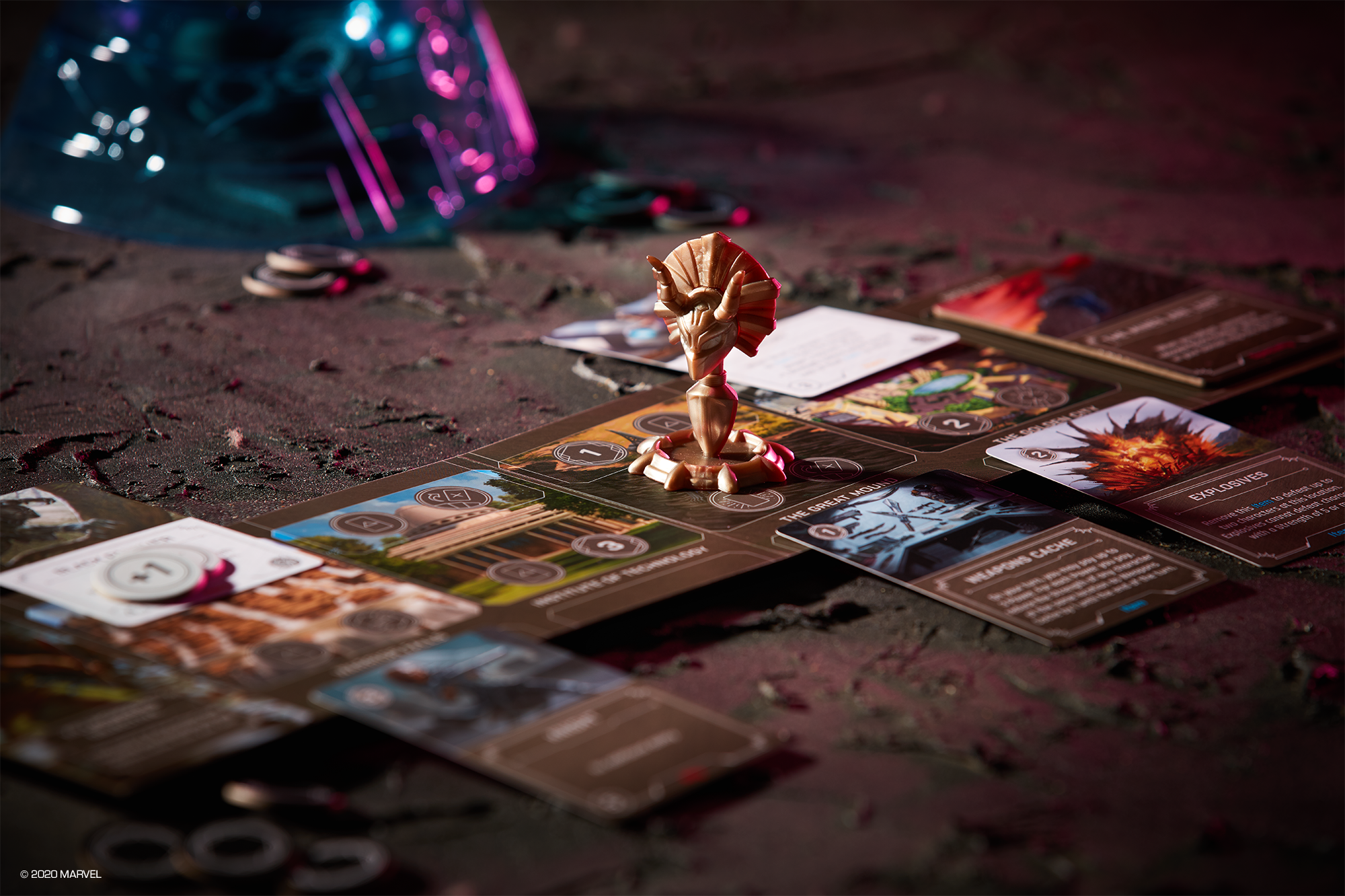 For Marvel Villainous, you can play as Thanos, Hela, Kilmonger, Ultron and Taskmaster. It’s a really nicely made game, and you’ll have your own game board, with the token representing the villain you have chosen. Whereas before, you would also have a unique fate deck, separate to your fellow players, that unique deck is now shuffled together with the other players. Your game will change based on the combination of who plays who, and adds interest when you play with different player numbers.

Then, you’ll experience shared events. These might represent the Avengers seeking to stop you for example, and they may have conditions that limit you – but they’ll limit all of your players, not just yourself. As a result, all players can contribute cards to defeat the event, should they wish to. They’re therefore stronger, and more difficult to defeat.

These aren’t the only changes, but they contribute to the feeling of getting something more from the game. It plays well, is themed beautifully, and the motivations don’t feel forced. For example, Thanos of course is seeking the infinity stones. In the Marvel films, Thanos never has his own film, but rather dips into others stories, and so that’s exactly what he does in the game. He has to attach the infinity stones to other players characters, and then transfer these back to his own timeline and hand in order to win. It’s a new mechanic, but it makes sense, forcing you to think differently about how you’ll win, or how you’ll stop the others.

This version feels like Villainous grew up a bit, and it’s not entirely unwelcome. Though the original format works, the evolution that has taken place fits in well with the Marvel villains, and their shared multiverse. The game is the usual and expected good fun, and if you can get your head around some of the quirks in the rules, you’re in for a great time.

A good game grew up into a great game

Try this if you liked: Villainous

Because you can never have too much of a good thing.