Mansions of Madness: Beyond the Threshold expansion review Mansions of Madness: Beyond the Threshold

Fantasy Flight’s second edition of Mansions of Madness is one of the best Lovecraft board games around, and the app-driven horror title now has its first big physical expansion in the form of Beyond the Threshold.

Beyond the Threshold technically isn’t the first add-on for the game, as Recurring Nightmares and Suppressed Memories both came out last year, adding new tiles, figures and scenarios. However, unlike those smaller packs, which were essentially revamped versions of existing sets from the first edition of the title, Beyond the Threshold is the first fully original expansion for the second edition. Plus, it includes two scenarios instead of just one. But who’s counting?

Due to Mansions’ new digital dependency, what’ll you’ll find in the box is actually only the tip of what the new expansion offers – enabling the expansion in the companion app will unlock the real meat of the two new missions. Of course, you’ll need the physical components to play the scenarios and there’s plenty to that effect, including new map tiles, tokens and cards, which both boost your existing stock of some pieces (such as clues) while also introducing brand new mechanics, such as locked items, and some fresh horror, damage and spell effects.

There’s also a new Lovecraftian beastie: the thrall. Unfortunately, while their presence in-game is quite formidable, the thrall miniatures are prone to the same poor production quality as the figures found in the core box when it comes to staying (or more accurately: not staying) in their bases. The ill-fitting peg on the bottom of the model’s foot risks the leg being bent or even snapped during attempts to get it to stay in the hole – perhaps consider a small drop of glue to help. It’s a shame that Fantasy Flight still appears to be having trouble with perfecting the models – especially given the price of the title – but it hardly impacts on gameplay.

The scenarios showcase some of the best that Mansions has to offer: The Gates of Silverwood Manor is a more traditional hunt around a haunted house to explain weird happenings, complete with some fun narrative and mechanical twists, while our personal favourite, Vengeful Impulses, is an Agatha Christie-style murder mystery story set during a dinner party (including a classic ‘lights out’ moment).

We found the former to have a greater focus on exploration and combat, while the latter made great use of the app’s ability to offer interactions and branching conversations with multiple characters. We can only speak from the outcome of our own choices, but it seems like there’s plenty of replayability and variety in both missions, which both last around an hour-and-a-half to two hours.

Taking on the fresh cases are two new investigators familiar to fans of the Arkham Horror universe. Wilson Richards is a combat-focused handyman with plenty of health and strength to soak up damage, while Akachi Onyele has mental resolve to resist horror and high stats in the observation, lore and will traits, making them a fitting pair for the two included scenarios.

Without giving away some of the narrative and mechanical surprises in store, Beyond the Threshold does a fantastic job of bolstering Mansions’ existing roster of characters and collection of components and offering two enthralling (see what we did there?) and substantial experiences. It shares the same weaknesses in miniature quality as the main game, but the strengths continue to outweigh the negatives to such a degree that it’s impossible not to recommend for anyone looking to return to the house on the hill.

It’s a shame that the thrall are once again let down by poor miniature quality, but the fantastic pair of scenarios, new investigators and introduction of fun and interesting mechanics in this expansion makes it an essential next chapter for Mansions of Madness’ fabulous second edition. 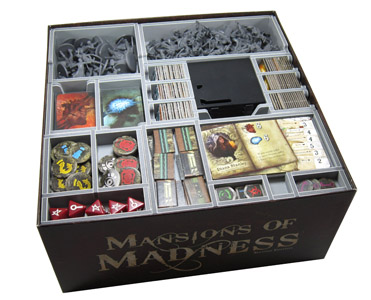 Compatible with Mansions of Madness 2nd Edition®, and Beyond the Threshold®, Streets of Arkham®, Sanctum of Twilight®, and Horrific Journeys® expansions, all inside the main game box!