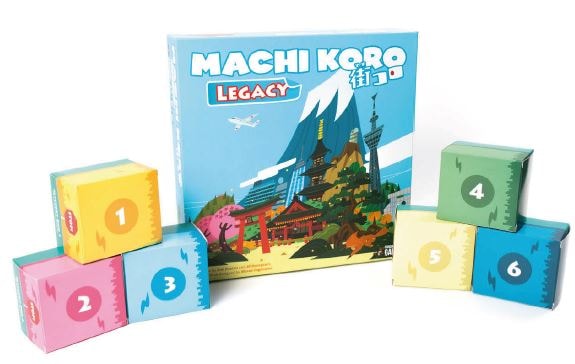 When news broke that the family-friendly city-builder Machi Koro was to receive a campaign-based reworking as Machi Koro Legacy, many players were surprised. While the original dice game had plenty of fans, its quick and simple approach to civic administration seemed a little light for the multisession, story-driven treatment. That, combined with the fact that the majority of games following in the trail of 2015’s Pandemic Legacy (whose prolific co-designer Rob Daviau earns yet another legacy game credit here) haven’t exactly set the world on fire, meant that expectations for this latest release were muted.

Play the first game in Machi Koro Legacy's series, and the minimal anticipation seems pretty justified. As with the original version, players become rival mayors aiming to turn their small towns into bustling cities. On every turn the active player rolls some dice, with different results triggering effects on an array of building cards that you’ll add to your town as the game progresses. Rather than adding anything meaningful to the mix, the opening game actually removes some cards, including the ones that let you steal cash from your rivals.

The result is a stripped-down and de-fanged version of a game that was already simple and not overly antagonistic. Thankfully, things quickly improve as you move into the body of the campaign.

Each playthrough sees new buildings added to the available selection. They come with new effects for players to experiment with, and it’s possible to put together some impressively powerful combinations. There are also visitors who wander between players’ towns, setting off various events as they go. And critically, the campaign introduces a handful of ways for mayors to mitigate the inherent randomness of dicechucking, something that could very quickly become frustrating over the course of 10 sessions.

It’s difficult to go into greater detail without giving away too many of the game’s secrets, but it quickly becomes deeper and more engaging than its predecessor; by the time you’re a few games in, vanilla Machi Koro starts to feel a bit lacking in comparison. While there are new rules, strategies and components to unlock each time you play, they’re introduced at a rate that’s easy to stay on top of, making this undoubtedly the best legacy game to introduce to kids or casual players.

It’s all tied together with cute, stylish presentation. Your cards depict buildings with bold shapes and popping, vibrant colours. The chunky plastic coins are a definite improvement on the original game’s cardboard discs. Even the oversized dice add to the sense of fun. The game’s flavour text paints a world of naïve childlike wonder that feels a bit like something out of Studio Ghibli, and while the campaign doesn’t come with much of a storyline attached, it’s just enough to keep everyone engaged and stop things feeling dry and mechanical.

It’s enough to make you wonder whether other entry-level games might be suitable candidates for a legacy overhaul. What would Ticket to Ride look like if you had to slowly build a rail network across a continent over multiple game sessions? How would Kingdom Builder feel if its citizens changed and its landscape was developed over time? Could we one day play through campaigns in Alhambra, Splendor or don’t hit me – Catan? If Machi Koro’s example is anything to go by, the prospects seem hopeful.