Everyone knows that sleep is brilliant, but what if simply by going to bed you could absorb power from your nightmares and wake stronger than before? This is the – not entirely comprehensibly fleshed-out – premise behind Lucidity – risk dipping into dangerous dreams to gain power, but encounter too many shadows and you become a nightmare yourself, hunting the other players. The winner is the dreamer with the most power at the end.

In practical terms, this is a push-your-luck dice drafting game, where you pull dice from a bag, pick which you want to roll, and either press your luck – risking losing all the power you’ve accumulated – or end your turn and pass to the next player. The four colours of dice have different spreads of values and special symbols – the red Primeval Fear dice are high risk, high reward, whereas the orange Imprisonment dice are more likely to end your turn early.

For such a compact game, the art and production are really solid – stark black-and-white illustrations of weird razor-mawed beasts and writhing tentacles sit in contrast to the lovely translucent custom dice which you pull from a cloth bag. Given that there’s very little in the way of flavour text or backstory to make sense of the game’s theme and setting, these visual and tactile elements go a long way to giving the game a pleasing table presence. The dice are a little smaller than standard which can make handling them or reading the exact symbol on each face a little fiddly, but overall it’s exciting to draw them from the bag and set them down in the appropriate squares on your player board. 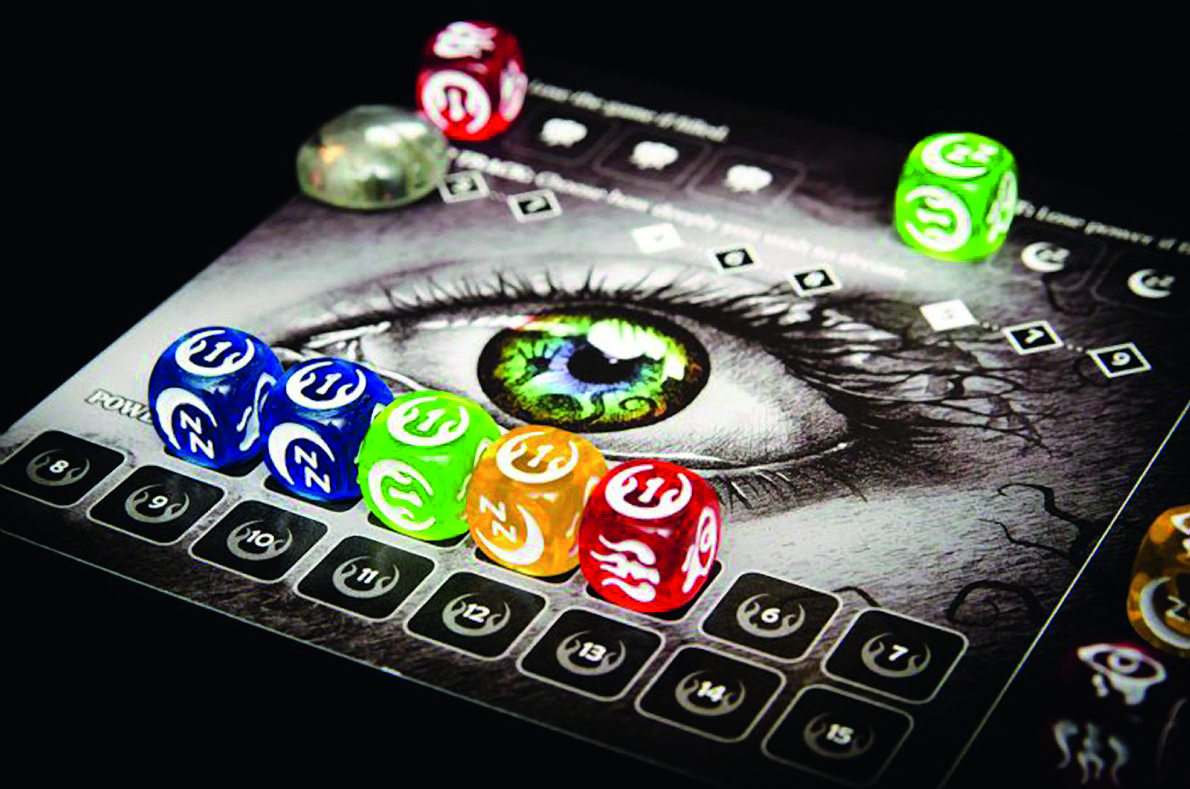 Don’t be too distracted by the theme, however, which is mostly pasted-on and doesn’t give you many clues as to game mechanics. At its heart, Lucidity is a fairly simple, fairly abstract roll and write. The twist comes in how players who turn into nightmares get to feed off the others. Depending on which of the four colours of dice tipped you over the edge, you’ll get a different special power, and you’ll be able to steal dice of that colour from other players’ score areas, or give them extra dice to roll (in the hope of exhausting them and making them lose their power).

So far, so fun. The problems arise when it comes to how meaningful any of these decisions feel. You’re only ever choosing between dice you pull from the bag, so if you draw dice of all the same colour, you have no choice at all. Some of the shadow effects let you tweak dice rolls, but even these aren’t necessarily positive.

Unlike most roll & write style games, you don’t have many options for mitigating bad luck, nor do you have many ways to use the results of your rolls. The result feels programmatic, since the optimal move is typically obvious, so every turn I’d an identical process of taking dice, rolling dice, placing dice. Even stealing other players’ power as a nightmare doesn’t mix things up much, and feels bad for the player you plunder, who has no way to defend themselves.

None of this matters too much for a single playthrough, but after a couple of games it starts to feel very samey. Even the difference between types of dice is one of degree rather than opening up gameplay opportunities. It feels like Lucidity could be a really cool system contained within a larger game, maybe with a central board on which players interacted, but as it stands, it doesn’t feel lean or snappy so much as underdeveloped.

TRY THIS IF YOU LIKED Legendary Encounters: Alien

If you want a horror-ish game with atypical mechanics where players might turn on each other, Legendary Encounters: Alien has you covered for cards. If you want to roll dice & have some player interaction, Roll Through the Ages isn’t horror but it is good, and there are plagues which are pretty horrible.