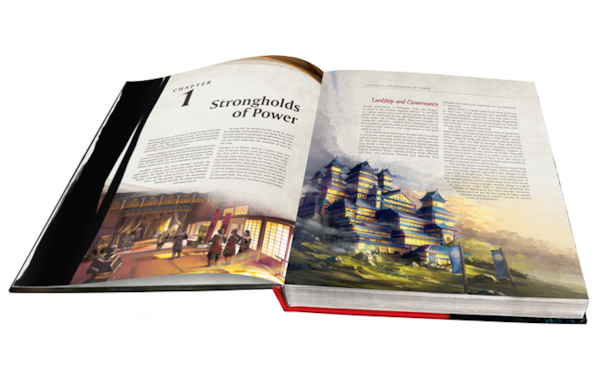 When a book is dominated by settings, locations and characters it usually falls squarely into the domain of the GM, but navigating the complex politics and social rules of Rokugan makes the detailed breakdown of Emerald Empire virtually required reading for Legend of the Five Rings players, too – the fact that it comes with a handful of new character options is just the icing on the cake.

Where the core rulebook was short on setting in favour of laying out the rules, Emerald Empire approaches things from the complete opposite direction. The overwhelming majority of the book is filled to the brim with facts, figures and fiction about everything from mighty castles to lonely fishing villages, with only one chapter containing new rules.

Players can use this to craft their backstories and build their relationships with the wider world, while GMs use it to fuel adventures and excitement throughout the campaign. A section on dark rituals and forbidden magic is particularly potent with possibilities and could easily end up forming the heart of a campaign or adventure.

One welcome addition throughout these background sections are semi-regular sidebars explaining how the beliefs, spirituality and cultural aspects of the Japan-inspired Rokugan relate to actual real-world customs. These are great primers for handling things with appropriate levels of respect and care, while still having fun at the table.

On top of learning more about their clan and the world they live in, players also get the chance to pick from a handful of new options. These include the chance to create a character from one of the imperial families – a choice that presents countless story threads for your GM to pluck on – and a pair of new monk disciplines, but perhaps the most interesting options are the Kitsune and the Kolat Saboteur. These are both roles that stand apart from the usual dynamic of a loyal and honourable party, starting the character off with a false identity and a whole heap of secrets to keep.

Emerald Empire is a resoundingly solid book and a must-buy for any adventurers looking to truly invest in the world of Rokugan. For once, the GM may even be able to get the players to chip in to buy it too.