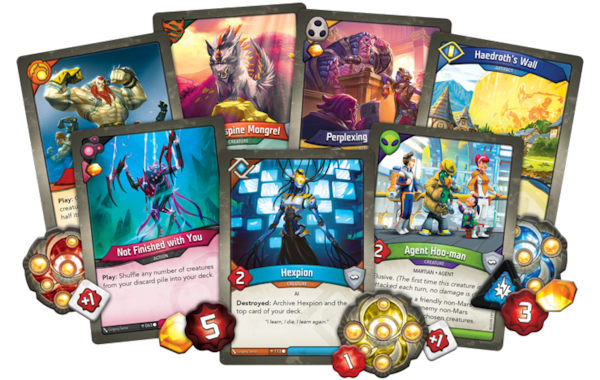 A contemplative turn, but with extremely violent giants

When KeyForge, the new game from Magic: The Gathering creator Richard Garfield, was unveiled in 2018, many long-time card game fans weren’t quite sure what to think.

Like Magic, it saw players do battle using decks of cards representing elite troops and dangerous creatures. Unlike Magic, though, it didn’t allow players to build fine-tuned custom decks, instead handing them pre-constructed sets of cards assembled by a computer algorithm, with no two ever exactly the same.

Now publisher Fantasy Flight has released the first expansion to the game’s card pool, and it seems like many of the new additions are intended to slow down the pace of play, restricting players’ options and reducing the potential for massively swingy turns that tilt the game in one competitor’s favour.

There are the new Alpha and Omega keywords, which denote cards that can only be played as the first or final action on players’ turns. There are cards which impede your opponent’s ability to gain the mystical energy known as æmber. And there are new ways to prevent opponents gaining keys – aka victory points.

It might seem like a step back from the kind of exciting and dramatic moves that appealed to many fans in the game’s earliest days, but working around these roadblocks takes some real cunning. And if you don’t fancy getting too technical, you can always grab a Brobnar deck; the race of gleefully aggressive giants still prefer to smash their enemies’ faces first and ask questions later.

The first KeyForge expansion retains the original set’s flavour, with different factions offering aggressive, duplicitous or controlling tactics, and each deck presenting new tactics to master. But it also takes the game in a slightly more thoughtful direction. Age of Ascension doesn’t introduce many dramatic overarching changes, but it still throws up plenty of interesting situations and strategies.