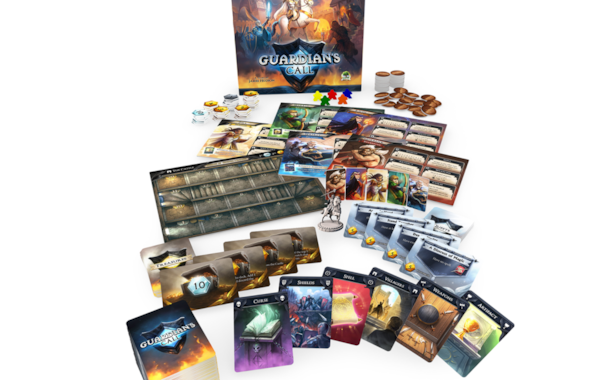 Defend the realm by hoarding and lying

Guardian’s Call looks like a generic fantasy RPG, but it isn’t an adventure game at all – despite including player minis and a score tracker that looks suspiciously like a dungeon crawl. It’s a straightforward bluffing and set-collection card game, filled with impressive components and smart balancing elements that help elevate it beyond being Liar’s Dice with cards.

Guardian’s Call features five guardian cards that players should be collecting for the war effort: weapons, shields, spells, artefacts and villagers. The primary method to acquire cards into your tableau from your hand is to offer them to your fellow adventurers, facedown.

The gameplay works similarly to Liar’s Dice; you can opt to tell the truth or bluff, and it’s up to your targeted opponent to suss out the truth or the lie. A sixth guardian card, the curse, offers a fun bit of take-that as the loser in the offer is forced to lose a card.

Each guardian card type offers a different set bonus. Weapons and shields simply score victory points at the end, while artefacts can be traded in for treasure cards that provide more victory points and special abilities. Rescuing villagers is far from altruistic, as well, moving your mini along the castle track board to nab extra victory points at certain intervals.

In every offer there’s a winner and a loser, depending on if your opponent guessed correctly. Smartly, Guardian’s Call gives the loser a single coin as compensation. You can then use three coins to purchase a card directly from the market of face-up cards, or five coins to discard a curse from the market for victory points. It’s an intuitive and effective balancing system, and helps make Guardian’s Call much more manageable for kids (and the hopelessly honest) despite the 14-plus age rating on the box.

Quest cards help add a welcome dash of variety. Each game features three random quests that offer bonus points, such as collecting the fewest weapons or including only two different types of cards in your tableau. Quests often change the inherent value of certain cards in a game, leading to even more deliciously duplicitous mind games.

Where Guardian’s Call truly succeeds is in its components. You’ve never seen a simple card bluffing game as well-moulded as this one. Each adventurer includes a full player board that provides a nice rundown of each set-collection bonus, as well as a coloured mini for the castle track board. The card art is colourful and lovely, and everything is incredibly well-organised in the box thanks to the included Game Trayz insert.

Great components don’t make a bad game good, but they can make a relatively simple game much more memorable and attractive. It’s disappointing that the individually-named hero classes don’t differ much from each other, and the minis ultimately feel like a wasted opportunity. Despite its relative simplicity, Guardian’s Call can be hilariously enjoyable with the right group of devious adventurers.

Guardian’s Call is one of the best-looking set-collection games we’ve seen, but it’s still a very simple gameplay concept and may not do enough to attract non-fans of social deduction games.