Like your fantasy dark, your foes demonic and your quests deadly? We’ve got just the place for you...

The name’s a bit of a giveaway. Gloom of Kilforth, be assured, is not all sunshine, lollipops, fairy dust and unicorns. A play session in British independent designer Tristan Hall’s lushly detailed, card-based fantasy terrain is more likely to yield pelting hail and fierce storms than sunshine. And if it did feature a unicorn, it would probably be called the Horn-horse of Agony or something.

Yes, it’s tough out there in Kilforth. Those painterly terrain cards (each impressively rendered by Polish artist Ania Kryczkowska) might look inviting in their randomly laid five-by-five grid, but don’t let them fool you. When you’re not encountering hideous demon foes or trying not to inhale the titular, life-leeching miasma that creeps across the land at the end of each day (by flipping an indicated terrain card ‘Into Gloom’, like Forbidden Island’s landscape-depleting flood mechanism), you’ve still got a wealth of quests, stranger encounters and places to confront and survive. Even the seemingly benign Goodwife can nastily turn on you if you rub her up the wrong way (via a failed influence test).

This is a co-operative, explorative race against time in which success against the world-corrupting Ancients (i.e. end-game bosses – one per player) really does depend on your questing heroes working together as a tightly-knit unit, spending action points wisely on a wide range of options (hide, confront, search, etc.) and being prepared to bravely run away from a fight.

Though player-eliminating permadeath can only occur once those powerful big bads are on the table for the end-game, losing all your health presents a significant setback. So each of you must be utterly prepared to make sacrifices for your fellow Kilforthers, while also teasing out the most effective card synergies through each extensive, absorbing and occasionally frustrating session. 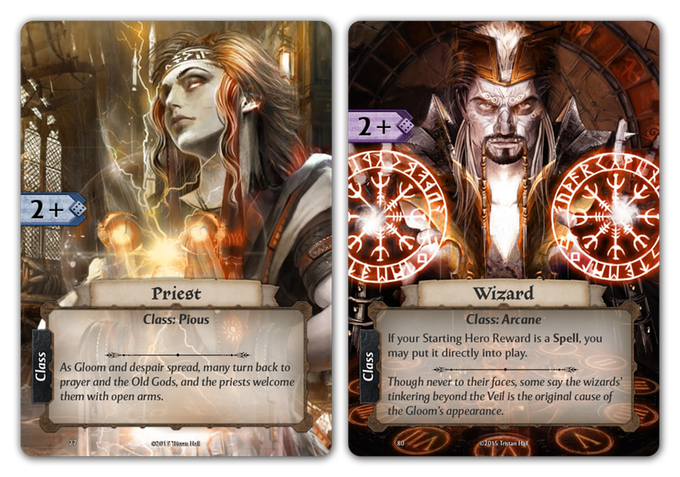 Even so, Kilforth also works well as a challenging solo experience, especially as each character, built from a combination of eight D&D-ish classes and races, has to choose and complete a four-chapter saga by collecting cards with specific keywords, then levelling up via the application of new skills with each chapter completion before they can take on those unpleasant demon-lords.

Be warned, though. It is a very rule-y game, taking time to settle into Hall’s terminology: the difference between actions (which require spending action points) and deeds (which don’t), for example, or rumours (unplayable reward cards held in the hand) and assets (rumours that have been discovered in a specific location so they can enter play as items, allies, titles or spells). A seasoned Gloom-head will have twigged that a successfully confronted stranger card can be instantly traded for an ally card rather than taken into your hand as a rumour, which is the surest way to earn, say, a shadow or pious keyword, but for the first few sessions there will be a lot of flipping through the rulebook, squinting hard for clarification. Even once you do get it all down, the box’s suggested playtime of 45 minutes per player seems crazily conservative. Even a two-player bout takes around three hours.

But, despite a little too much dice-rolling for this player’s taste (the presence of result-improving fate tokens only slightly mitigating the bad-roll rage), those long, sprawling, fantasy-questing sessions always left us craving more. It’s a gorgeous product and a worthy entrant into the burgeoning ‘RPG in a box’ subgenre. Debut designer Hall’s passion and enthusiasm are evident on every card. His sense of humour, too; yes, there is a little levity amid all that doom and Gloom. Kilforth may have no unicorns, but it does have a dog ninja...

A brutal but rewarding gothic-fantasy co-op. Its knotty rules take a few sessions to fully absorb, but it delivers a truly epic and exciting narrative feel that’ll keep drawing you back to its gorgeous-but-deadly world.

Publisher: Hall Or Nothing Productions