Deciding an heir based on the landscaping and horticultural skills of a kingdom’s subjects wouldn’t be my first consideration for the foundation of a monarchy, but when it’s this much fun perhaps it’s not such a bad idea.

Four Gardens is stunning set-collection game from relatively new designer Martin Dolezal and published by Korea Board Games and Arcane Wonders. Thematically, the game places players in a gorgeous East Asian kingdom – its beauty looked upon and judged by four gods, and ruled over by a dying queen. With her health failing, the queen has tasked her subjects with building the most pristine gardens around her towering pagoda. The player/humble gardener whose efforts are deemed worthy by the gods will ultimately rule this beautiful land, with not a second thought given to prior knowledge of political and economic protocol…

In any case, players will be sat before the game’s stunning centrepiece; a three-dimensional, four-tiered pagoda. To obtain the resources needed to construct their gardens, players will be manipulating the structure, rotating it and receiving the goods displayed on its facings. Yet, whilst the pagoda is undeniably the star of the show here aesthetically, the game’s beating heart lies within its multi-use cards.

Each charming and uniquely illustrated card depicts a segment from one of several complete gardens, which, when finally constructed, will link together panoramically, scoring points and granting bonuses. Cards played on their reverse face however, represent a landscape in progress, with a resource cost to be paid before flipping it. This is just one out of the four available actions, with the rest also being depicted through iconography on the cards’ reverse.

Gathering resources requires discarding a card after following its clear instructions on which section of the pagoda to rotate and whether to collect goods from top to bottom or vice-versa. This is important as initially, only four resources can be placed in order onto players’ planning tiles, with any surplus being left in the supplies. It is worth noting though that all of this twisting and turning between turns renders most strategic thought obsolete at higher player counts.

Cards will also be discarded when allocating resources between landscapes and occasionally snatching up a wild resource. But, no matter the action, a card will always be discarded or played from a hand of five, for each of the three actions taken on a turn. Consequently, each action presents a conundrum; will I need this card for my garden, or do I discard it for another purpose?

Four Gardens exemplifies the quintessential gateway game; light theme, light rules, but packed with strategic depth. Many games fit this profile, but pairing this with such exquisite and eye-catching production is where Four Gardens excels.

The pagoda may be the clear focal point, but elsewhere, touches of quality and care further elevate the overall design. The shaped wooden resources are cute and plentiful whilst never becoming unmanageable thanks to the restrictive nature of the planning tiles. This not only poses its own satisfying puzzle but also keeps player areas clean and uncluttered - an important consideration when trying not to overwhelm new gamers. Furthermore, the gorgeous illustrations adorning the cards provide their own minor pleasures when arranged panoramically, giving players a series of mini-goals throughout the game. All of this comes packaged in a fantastic insert, keeping things secure and easy to pack and set up – although I don’t see it leaving my table anytime soon. 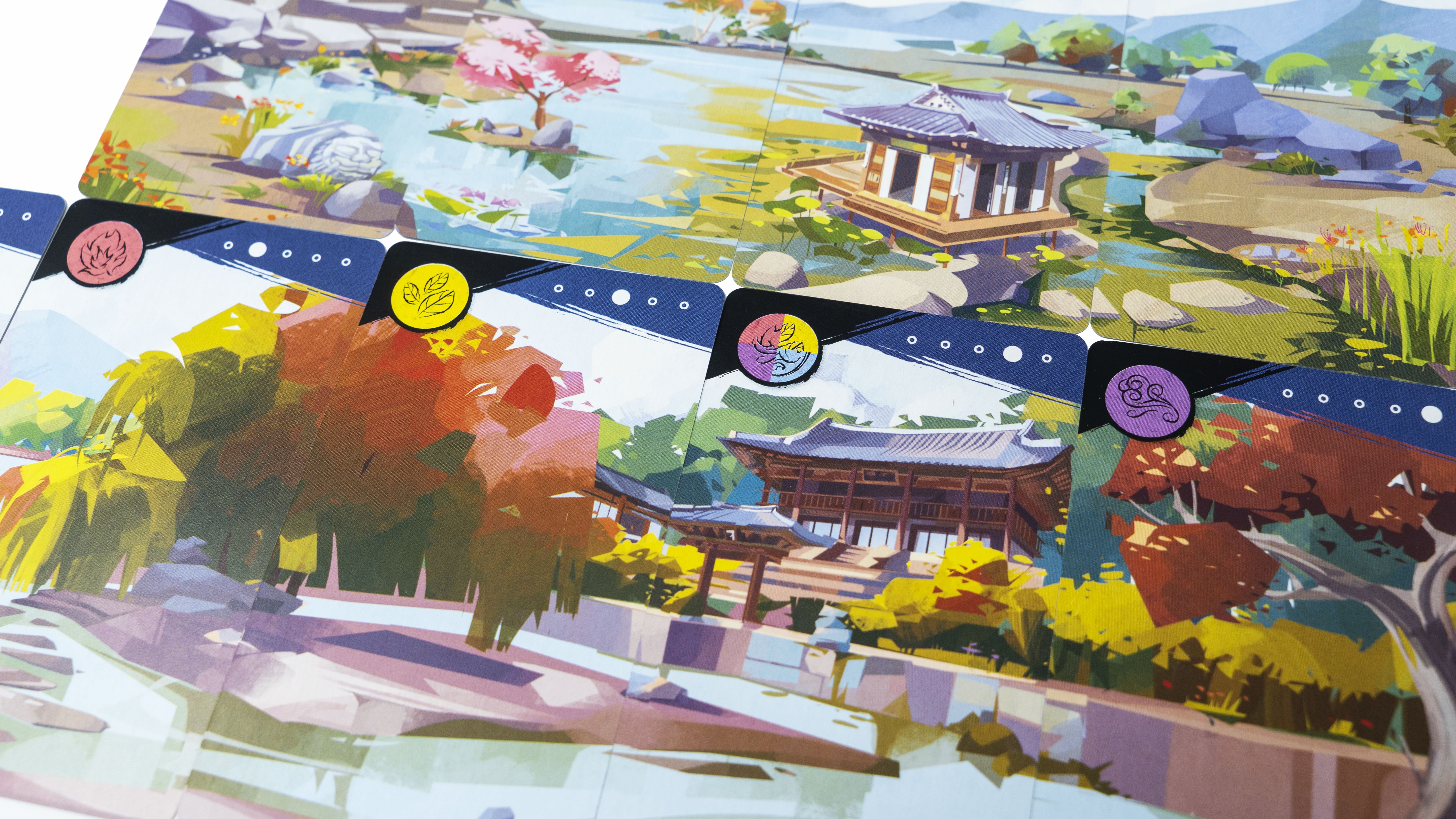 Four Gardens’ four-tiered flashiness stands strong in its foundation of gateway goodness, maintaining an impressively balanced ratio of table presence and function, whilst using the initial allure of its teetering tower to tilt it toward becoming a keeper.

TRY THIS IF YOU LIKED NIDAVELLIR

Both of these titles demonstrate how contemporary designers are still managing to add innovation to classic set-collection mechanics.

I am completely baffled how this game has got so much praise and was chosen to be a Dice Tower Essential. It's just...boring. The main event of the game, turning the pagoda and collecting, is just mostly disappointing and limiting. Other players have turned it so it is never where you need it to be, and you probably don't have the right cards (in fact you almost never have the right cards and the right pagoda position together). Then action! you turn it and... collect resources. Ho hum. Looks great, but i just found it to be quite bad. And one other silly thing, when you put the pagodas back in the box, the instructions need to be on top, so they are going to get ruined by being balanced on the plastic pagoda spikes!