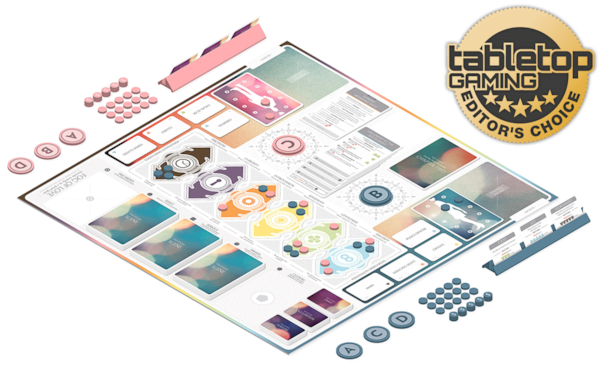 Part board game, part RPG and part compatibility test, Fog of Love is unlike anything else on the tabletop. Described as "Romantic comedy as a board game," it’s a hilarious and often touching experience that simulates the relationship between two made-up partners as they navigate the rocky waters of romance.

Your alter-ego (no need to panic, couples – you don’t play yourself here) is created using a smooth process that quickly generates their occupation and personality from a pool of cards (you can freely select their gender, race and other aspects). Traits help to influence your decisions throughout the rest of the game, but also serve as a form of hidden personal goal – so a disorganised character might be trying to attain a certain lack of discipline in their life by the end of the game, for instance.

Best of all are your three features, which are picked by your partner and make each character feel realistic and fleshed out, often with the side effect of being laugh-out-loud funny when combined. In one game, we had a cute but clumsy baker with crooked teeth dating a banker with body odour, while another saw a pilot with shaky hands fall head over heels for the squeaky yet sensuous voice of a priest. There’s plenty of material here for those willing to roleplay their creations – the ample potential for the latter half of the game’s rom-com tagline to set off roomfuls of laughter makes it just as entertaining when playing in teams or even as a spectator.

The game’s movie-inspired feel is strongest in its structure, which is divided into chapters comprised of a varying number of scenes, played back and forth from each player’s hand and drawn from specific decks that lead certain acts to be more sweet, serious or dramatic.

Each scene prompts a typical situation – an argument at a restaurant maybe, or an attempt to make breakfast in bed – and is steered with a Mr & Mrs-style secret selection of the options available by each side before both parties reveal their choices and effects take hold based on their individual decision and whether they matched their partner or not. It’s simple yet far more impactful and fun than you might expect, thanks to the sharp writing on the cards and the inevitable outbursts of debate (after a disagreement) or joy (with a match).

The result also affects each character’s satisfaction, plus their overall disposition, which is tidily broken down into six core elements – discipline, curiosity, extroversion, sensitivity, gentleness and sincerity – that shift up or down over the course of the game, resulting in a final balance in each half of the couple that dictates the way the story concludes.

As you progress through the game’s different stories – each comes sealed in a booster pack-style packet and provides a certain setup, such as being high school sweethearts – more intriguing mechanics begin to feed into the once simple maintenance of your relationship; you might decide to keep a secret from your partner, for example, and hope they don’t accidentally spoil a surprise party or forget your anniversary before the fate of your courtship is revealed. Early games end on a scale locked to the positive end of the spectrum, with partners calculating their individual happiness but destined to remain together no matter what, while later playthroughs can result in tragic breakups – particularly devastating if one partner reveals their own desire to try and make it work in the face of rejection.

While there is gameplay in the placement of tokens and pursuit of specific defined goals, Fog of Love is best approached as a storytelling or roleplaying game that just happens to include a board. The gameplay mainly helps to keep things moving forward and offer up a framework for players’ imaginations; the biggest draw here is the story you craft together, trying to balance your own personal satisfation with your desire to connect with your partner before you discover whether it really was meant to be. For all the laughs and absurdity possible (something many of the scenes don’t shy away from), it’s surprisingly effective at capturing the highs and lows of a relationship that feels real – one that will only leave you thankful of the time you’ve spent together.

Fog of Love is a fascinating combination of roleplaying and board game-style goal-chasing, with a good dash of natural humour and drama chucked in for a near-perfect mix. Those after more of a ‘gamey’ game might find the focus on storytelling leaves them little to do, but if you’re willing to embrace the chance to weave an engaging tale with someone else, this is an unforgettable time.