Changing worlds with the flick of a wrist

Tabletop gaming is a multifaceted beast, not least through the multitude of ways games exercise and test particular skills or abilities of those who play them. They’re both indicators of and breeding grounds for quick witted tactics and precise strategy, not to mention mathematical skills, logical problem solving and a plethora of others. In this review though, we’ll be focusing on a game utilising perhaps the most useful skillset yet: judging the precise amount of power needed to accurately flick a wooden disc.

Flick of Faith is a dexterity flicking game. In regard to theme, two to four players will be assuming the roles of gods from a variety of mythologies, and playfully pitting them against one another as they mischievously attempt to rally up the most believers in the world beneath them. Mechanically this involves players taking turns to flick a ‘prophet’ from their cloudy corner and hopefully have it land within one of the four island regions on the lovely neoprene board. Once all players’ prophets (usually five) have been sent careening across the world, points will be scored based on simply having presence on islands and for having majorities, with a winner being declared after four rounds.

Essentially then, this is area control by way of flicking – a concept that seems too simple to truly work but does, and does so spectacularly. Partly this is down to the intrinsic satisfaction of simply flicking something with purpose: it’s a lighthearted test of dextrous skills, like a miniature sporting event but with (hopefully) less chance of injury. But more importantly, Flick of Faith manages to prop up this finger flicking foundation with a number of subtle but engaging sub-mechanics.

Indeed, the first thing players will be doing in the game after choosing their asymmetrically powered gods is voting on a new rule to be added to the mix. These can range from having players spend a round flicking with their eyes closed to negating any points scored from particular islands for the rest of the game. Whether it’s by introducing imaginative and varied changes to play or even the addition of further components, this voting phase preceding each round seemingly never fails to excite. 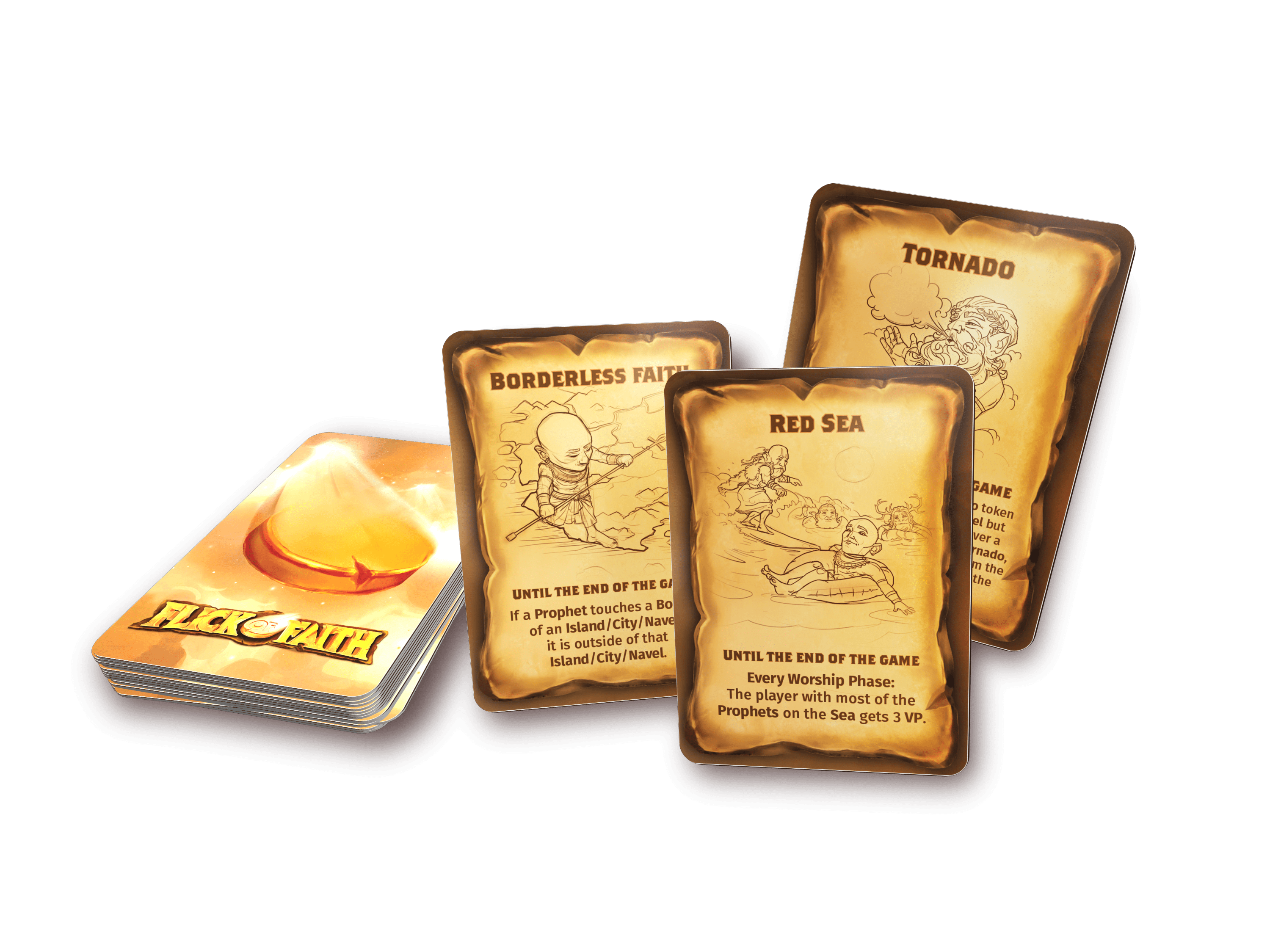 Adding tension and a smidgen of strategy to each rounds’ proceedings is the ability for players to erect temples (big, fat discs) on islands where their prophets have landed on a particular spot. Aside from the immense satisfaction of achieving the shot, these temples can subsequently be placed anywhere on the island - ideally in a manner that sends opponents’ prophets bouncing across the seas if they miscalculate an invasion. It’s a simple thing that nonetheless remains key to maintaining Flick of Faith’s carefully concise formula for fun.

As one of the titles published by Awaken Realms Lite – a more family oriented offshoot of its parent company – Flick of Faith is a distinctly bright and breezy take on a genre popularised by games such as Catacombs and Flick’em Up. Interestingly, this barebones simplicity actually heightens some aspects of gameplay, most notably with the variable player powers. There’s many games benefitting from asymmetry, but here, in such a minimal context, it shines. Players can scrupulously focus on their strengths without getting lost within the interconnected systems and mechanics often preventing larger games from highlighting a given player’s adopted uniqueness, which in turn heightens the celestial theming.

Thanks to its accessibility and outright fun, it would be hard not to recommend Flick of Faith.  Furthermore, if you’re ever torn between an area control or dexterity game, rest assured that Awaken Realms Lite have provided a solution.

TRY THIS IF YOU LIKED CROKINOLE

A brighter, bolder, and significantly cheaper alternative to this abstract dexterity game.