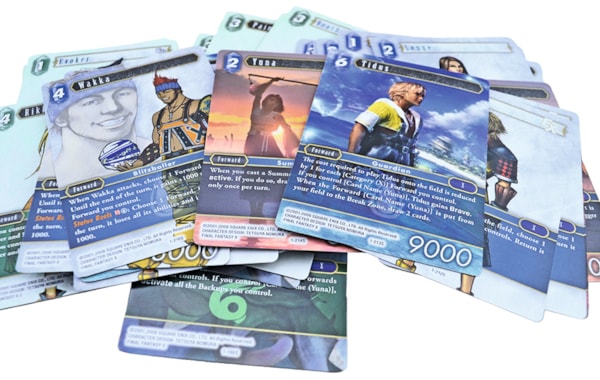 Let’s get this out of the way right now: if you’re not a Final Fantasy fan or don’t even know of the long-running Japanese RPG video game series, its newly westernised Trading Card Game is unlikely to set your blood pulsing.

If you are, the English release of the collectible card game that has now been circulating in Japan for half a decade is a reason to get really excited. Fortunately, Square Enix has taken a measured approach in launching the title over here, kicking off with three 50-card starter decks based on two of the franchise’s most popular entries – the lionised VII and X – and one of its more recent releases, XIII, rather than bringing the existing 2,000-plus cards across en masse.

The cards have been redesigned from their Japanese counterparts, the smart black backs embossed with the logo and finished with a lovely gloss. Your feelings on the artwork will likely vary with your fondness for the Final Fantasy series’ various heroes and villains – characters from older games are represented by stunning hand-drawn illustrations, while cards based on the newer titles often feature busier screenshots and CGI models from the games. At times, it can feel a tad incongruous. Overall, though, the iconic designs shine through and provide the requisite blast of nostalgia – pulling Vincent or Red XIII from your deck never fails to be exciting.

Designer Taro Kageyama is a former Magic: The Gathering pro, and it shows in FFTCG’s gameplay similarities to Richard Garfield’s CCG granddaddy. This isn’t necessarily a bad thing, as FFTCG often feels like a sleeker version of its muse. The game ends after a player has taken seven damage – with a successful attack counting as a single hit – rather than losing 20 life points. Suffering a blow results in a card being turned over from your main deck to the damage area, but cards with an EX ability activate instantly, mixing up the flow of play in interesting and unpredictable ways.

As in Magic, players activate cards with three general skills: backups, forwards and summons, replacing lands, creatures and spells. Backups can be dulled (tapped) for the crystal points needed to play a card or activate an ability, with discarded cards adding an extra 2 CP. Cards come in eight affiliations similar to Magic’s elements, with each likewise reflecting a particular play style.

A forward card’s power level serves as both its strength to attack and toughness to defend. Group attacks can be executed, but, unlike Magic, only a single card can block.

The result is a card game that is both faster and easier to learn and play than Magic and its ilk – for better and worse. The simplified mechanics mean a shorter match time, but may see some CCG fans bored by the lack of more complex tactics in the first sets. However, the addition of unique rules such as EX abilities and accessibility of the streamlined gameplay makes for a fantastic foundation for genre newcomers or video game lovers seeking a CCG with a theme close to their hearts. As a Final Fantasy fan, I'm hooked.

Its simplified nature is not going to win over CCG aficionados, but the polished gameplay and high quality finish of FFTCG makes for an exciting and promising spin-off in its own right for genre novices and video game devotees alike.