Cracking open the pages of the latest tie-in between D&D and the Critical Role crew feels a lot like walking into an impossibly polished version of somebody else’s homebrewed world. It’s a book packed with the kind of plot hooks and alternate rules that fill a million tattered campaign journals, but rather than being scrawled in illegible biro they’re all neatly arranged and backed up with the maps and stats needed to smoothly take them to the tabletop.

Of course, it makes sense that Wildemount feels like it was dreamed up by a fellow GM, because that’s more or less what happened.

The entire world is the creation of Critical Role’s GM Matthew Mercer, and the region laid out in the book is the setting for the incredibly successful live-play show’s second (and still ongoing) campaign. A lot of the writing within its 300-ish pages was supplemented by other folks on the D&D team, but the heart and soul of it’s still the creation of just one person. Well, one person and his table of talented nerds.

This slow-burn method of creation has produced a world that sprawls and spirals in a rather charming way. It lacks the sharp, single-sentence summary required from settings that needed snappy pitches to editors and managers – the closest you could get is “high fantasy adventures, but with war brewing and a shedload of spiritual intrigue to uncover” – and while this does result in a pretty fuzzy core identity it also helps Wildemount to feel properly organic.

Indeed, perhaps the book’s greatest strength is that it really doesn’t concern itself with trying to shake-up the classic D&D formula too much. Where other settings, such as the steampunk madness of last year’s Eberron: Rising From the Last War, try to take a battle-axe to the game’s old clichés and tropes, the Explorer’s Guide to Wildemount is more than happy to merely remix them.

The beautifully rendered maps stuck in the back of the book are littered with dwarven mines, monster-filled swamps and dragon-haunted peaks, any one of which could be neatly transplanted over to home games. Even the special character options, such as the undead Hollow One race, could easily be slipped into a standard D&D campaign with minimal fuss. 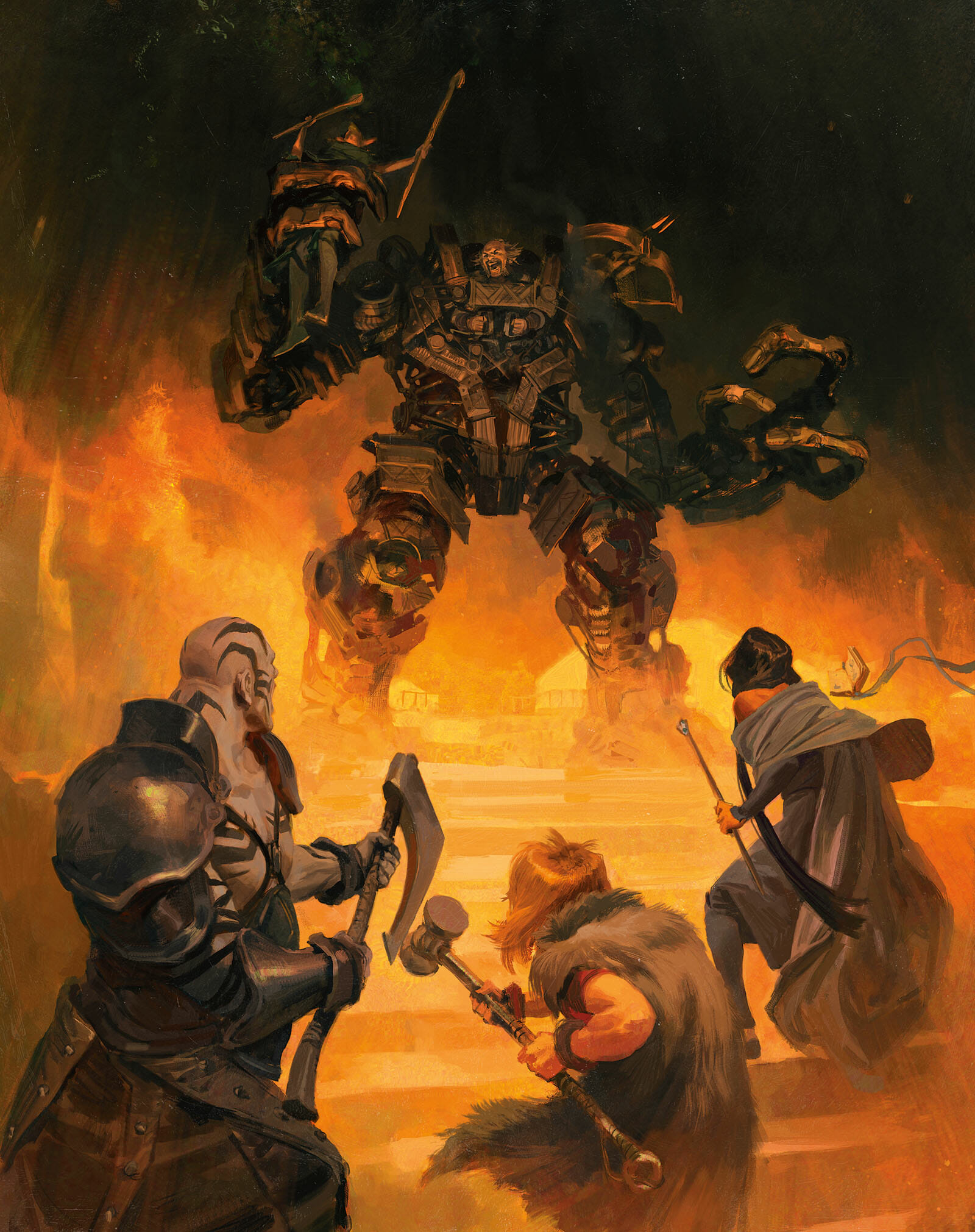 That isn’t to say there aren’t sparks of originality here and there, of course. The Krynn Dynasty, a nation of creatures traditionally considered monstrous foes, is a fascinating creation, for example, as is the gravity- and time-warping magic they use. It’s just that the most creative ideas impact things on a local level, rather than ones that radically shape the flow of the entire world.

Okay, you may not consider this to be a particularly positive thing if you’re sick and tired of the fantasy staples. However, for those of us who want a solid D&D world to explore but want something other than the current edition’s staple Forgotten Realms setting, it all works rather wonderfully.

And in case you were wondering, this all applies even if you haven’t even heard of Critical Role until you opened up this review. If you and your players are counted among the show’s legion devoted fans, though, you’ll probably be able to squeeze even more delicious story goo from its pages. On top of this, fans will probably be able to all-but ignore what’s probably the biggest issue with the world’s rather loose premise.

This is useful, as it really feels as though the book’s first few vital pages are written mostly with existing fans in mind. Oh, there’s plenty of words devoted to explaining politics and history, but you get a lot more careful nuance than the broad strokes that really allow newcomers to get a handhold on what makes Wildemount special.

It doesn’t help that the map that accompanies the list of regional powers at the core of the setting doesn’t actually label most of the nations you’ve just been reading about, either. Instead you get a geographical map that seems to assume you’ll fill in the border markers yourself.

It would be sad if this caused any potential converts to bounce off the Explorer’s Guide to Wildemount, as once you get your initial reading squared away it really is a very impressive piece of work. Within its pages you get huge amount of content, ranging from new adventures and magic items to long lists of important NPCs and the secret history of the world.

By far the lengthiest section of the book is an incredibly extensive gazetteer that runs through the details of dozens of towns, forests, dungeons and cities stretched from one end of the continent to the other. The writing is snappy and packed with little titbits of information ranging from who runs the local government to what kind of gear you might able to pick up in the shops.

Almost every single one of the locations it outlines manage to have something that makes them stand out from the crowd and feel worthy of hosting an adventure. What could easily have been just another trading post is instead home to a special breed of silkworms cultivated by dwarven clans, rife with struggles between farming families and spies trying to claim their secrets. 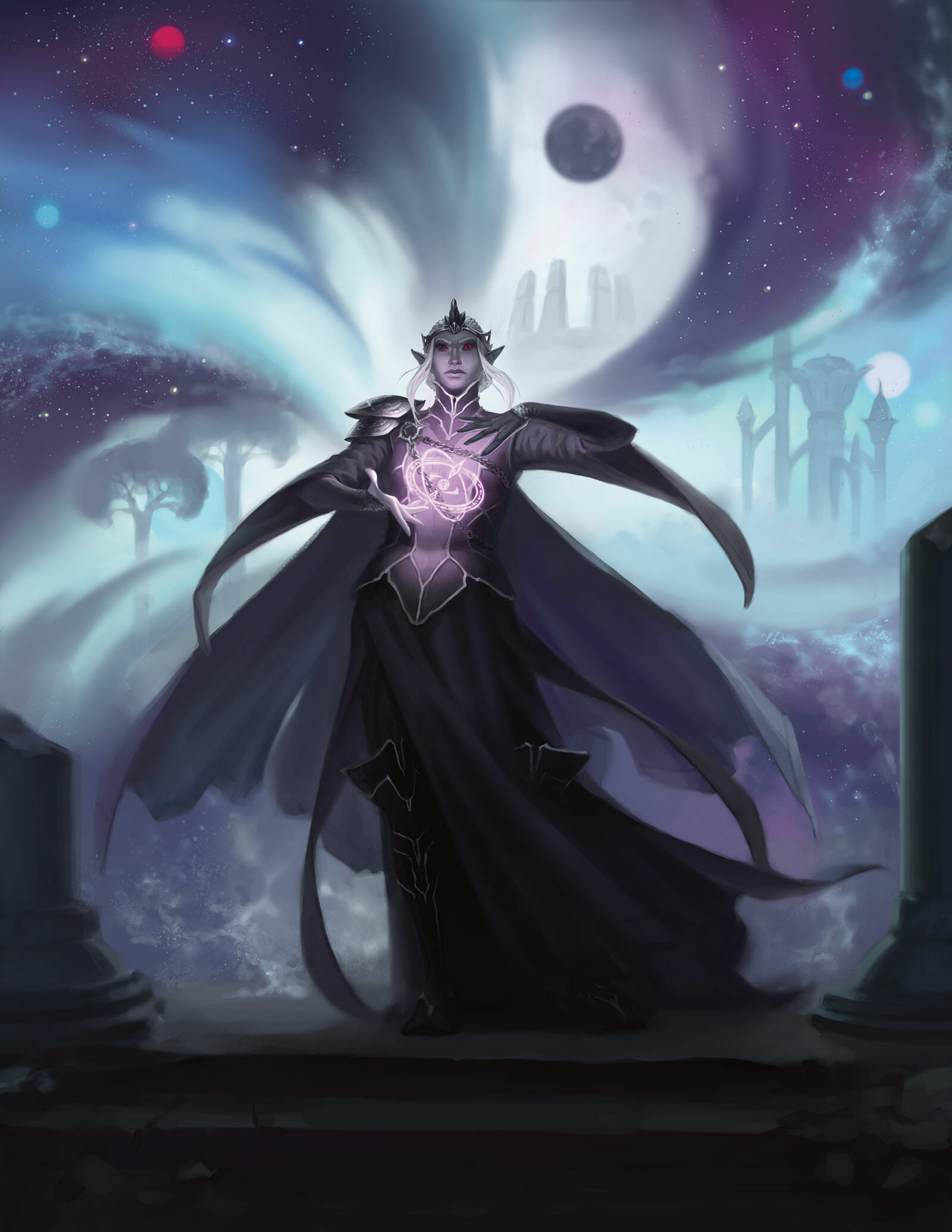 On top of this, almost every one of these entries comes with at least one idea for a plot hook or an adventure for GMs to seize on, with many offering a handful of suggestions depending on your party’s level. There are well over 100 of these scattered throughout the book, and while some may represent a quick diversion that adds a bit of local flavour to a session, others can form surprisingly deep and creative quests that might reshape an entire campaign.

It’s no exaggeration to say that you could potentially run an entire game about adventurers roving through Wildemount using nothing but these story prompts. This is one hell of an achievement, and one that sets a rather high bar for future setting books to aspire to.

Of course, these aren’t the only adventure ideas nestled within the Explorer’s Guide to Wildemount. There are also a quartet of solidly written quests, each of which aims to cover a party’s first handful of sessions and get them exploring a different part of the region.

A couple of them are given to the hand-holding found in many adventures aimed at brand new players, but they’re a wonderful way to ensure that your heroes always have a way to get going in whatever part of Wildemount you want to focus on. The downside to all this is that it can make it tough to actually use all four of the adventures, as they’re all aimed at the same, fairly narrow, set of early-game levels.

Accompanying all these glorious tools for the GMs among us are the near-obligatory handful of new character options for players to try out. Actually, calling it a handful might not be quite fair, as between the magic items and the plethora of racial options you get rather a lot of new toys to choose from. Few of them seem particularly ground-breaking, but they represent rather good value for money – especially if you’re looking to pick up all the monstrous and rare races scattered across D&D’s back catalogue.

The coolest and most potent new powers all come tied up in the funky ‘dunamancy’ magic found in the Krynn Dynasty. This gives both fighters and spellcasters a few ways to start messing with things like time, gravity and fate and, honestly, really drives home the fact that Wildemount got its start as a homebrew setting.

This isn’t because it’s bad or even silly, mind you. Rather, it feels like something ripped from a homebrew because it’s so unselfconsciously cool. Warriors who can fight using time-echoes of themselves as allies is just the kind of thing a thousand GMs sitting at home have sketched out in the margins of their notebooks. However, it the Explorer’s Guide to Wildemount was just what it took to get those ideas written up, playtested and put into an official D&D product.

This is the heart of the book, and perhaps of Wildemount as a whole. It’s a world that so many of us could imagine creating, one settlement and dungeon at a time, but with slick production values and a bit of actual editing. Even if you aren’t a fan of Critical Role, this is a book well worth checking out and one that sets a high standard for the game’s future releases.

A world so beautifully messy it feels like you could have made it yourself. That’s a good thing.

TRY THIS IF YOU LIKED D&D ESSENTIALS KIT…

If you hopped into D&D aboard the Critical Role train, this is a wonderful place to head after getting your toes wet with the starter set