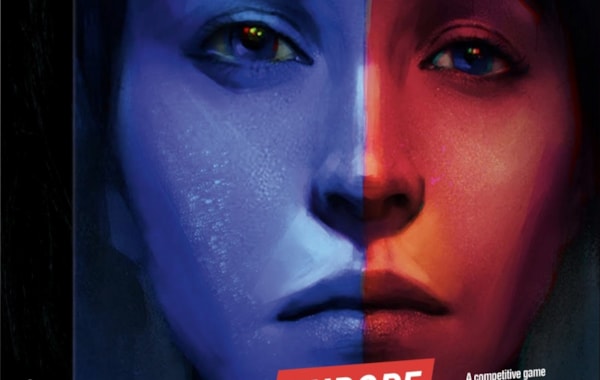 Europe of the last 30 years has been a fairly confusing place. This isn’t new of course, but when it comes to playing out Europe on a map in a board game, we’re more likely to pick a headliner event like WWII or the Crusades… So having a game of geopolitical conflict – on the ground and in the political arena – presented in front of you from a time in recent memory can feel a little startling.

Europe Divided is a game of arena control and influence between the asymmetrical powers of Russia and what can loosely be defined as The West. Players pick their side and begin attempting to take important contested regions of Europe (i.e. the middle bit) by playing influence dice into them, sometimes protected by boots on the ground. It’s a kind of deck building area control game. As you take control of contested regions, you add their cards to your deck, giving you their bonuses as you rotate through. Actions on the cards, of which you get to play two from your hand each turn, are things like move an army, create an army, add influence to a region or increase influence that’s already there. Influence is tracked on various dice in a region (highest number is the owner) and bumping armies against dice lowers them and removes the army in question. The headlines, of which only two are active at any one time, are the way to score prestige (victory points) and eventually win the game. There’s midgame scoring and end game scoring based on dominance and completed goals. It’s pretty straightforward.

The mismatched factions are where things get spicy. While the European side is dripping wealth and arms, it also has split influence to manage – there’s the EU and there’s NATO – both of which have their own requirements in any region. The EU doesn’t have any military force, but is easier to build up controlling influence with, and the NATO side is your main tool for removing influence in other regions. The Russians on the other hand have a more straightforward game to play, but not necessarily the funds to achieve what they want each turn.

As a two player only game, it’s got the tug-of-war-joy of both parties feeling like it’s a struggle to get their shots off on one another – whatever forms they may take. As the European side, you feel like you’ve brought an oil tanker to a dogfight and as the Russians there’s a sense of just never quite having enough gas in the tank to get the job done. But we had to ask ourselves after the first game, what job did we think we were doing? Ultimately we’d gone in expecting to achieve domination somehow, but in reality – given the tools at hand – it was always going to be a compromised position which left the continent divided. The clue was in the name of course. It always felt like we were losing, whatever side we were on, which is the nature of a geopolitical struggle like this. It’s in parts desperate and exciting, and with such recent history on your side everything feels a little more real. In short, there’s few better ways to spend some time slicing up a continent.

With its deep and flavourful asymmetry and startlingly up to date events, Europe Divided feels less abstract to play that other geopolitical scrums. In parts cerebral and part visceral, it’s a game that demands real choices from players, and it’s a thrill to make them.

TRY THIS IF YOU LIKED Twilight Struggle…

Like this cold war classic, Europe Divided puts you in the place of a bubbling conflict that is difficult to fully articulate – but satisfying to play out.