Elector Counts is a card game set in Games Workshop’s Warhammer universe, as presented by Cubicle 7’s Warhammer Fantasy Roleplay. You are the titular – uninspiringly-named – Elector Counts, ambitious nobility vying for control of the Empire during a bitter and bloody civil war. To win, you must have control over the most valuable selection of territories by the end of the game.

Play involves setting down location cards, which earn you money immediately and victory points if you still control them at the end of the game. You can also assign defenders or attackers to a location. If your rivals have no cards attached to the location, these are played face-down, meaning no one knows the exact strength of the forces you’ve committed. If you play multiple cards as defenders, they can’t share the same name, whereas multiple attackers must, unless they have the special ‘ally’ keyword that denotes mercenaries and assorted scrappy irregulars.

Elector Counts was designed by Martin Wallace, who at this point is approaching board gaming Elector Count status himself, being responsible for Euro-classic Brass and card game London. It’s a reskin of the decade-old Doctor Who card game, switching out licensable content for a theme that arguably better suits the mechanics of a card-based area control. 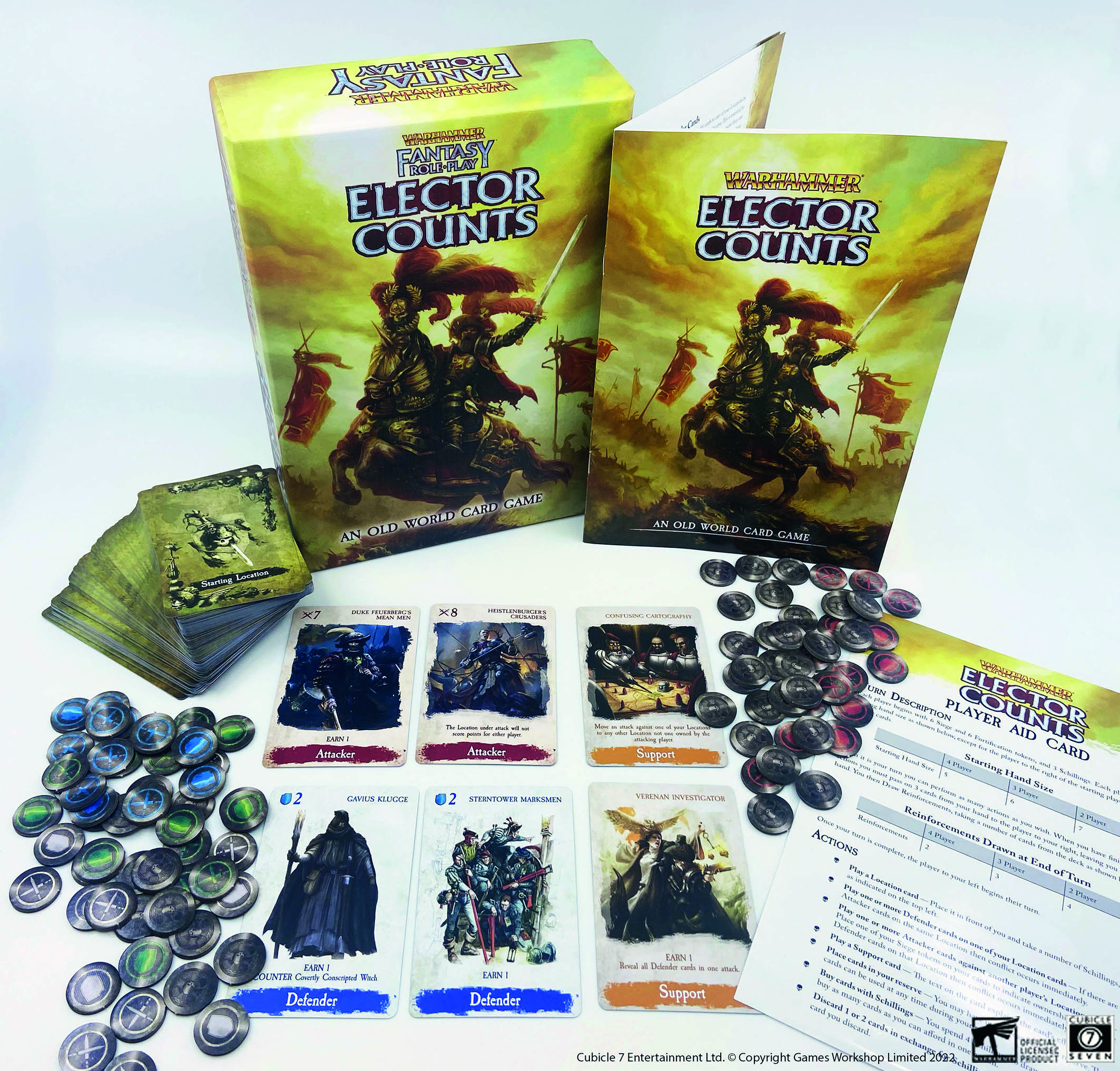 One thing Wallace can never be accused of is resting on his laurels – unlike Uwe Rosenberg, who tends to try a single mechanic over and over again until it’s been either perfected or exhausted, Wallace’s games are diverse in setting, complexity and feel, from the silly, take-that capers of Nanty Narking to the miniature-based melee combat of Wildlands. Elector Counts sits somewhere in the middle, being a mix of light tactics with some bluffing, threat assessment and a hefty dollop of luck.

Sieges are resolved by flipping defender and attacker cards face up, resolving any effects, then counting their total strength values. Whoever has the highest wins and takes the location, and defenders win draws.

It’s worth letting new players look through the deck before their first game, as, without a good sense of the general spread of strength values, and – more importantly – the one-off effects they might have, conflicts are a bit of lottery. Knowing, for example, that certain units have other ones that just counter them, removing them from battle, or that some cards, when revealed, can instantly assassinate others, avoids potential feel-bad moments in first games.

You’re not totally at the mercy of luck. You can pay to draw new cards, discard cards for money, and each turn the previous player will pass you three cards from their hand. But with support cards that do things like, just instantly remove an attacker from a location, there’s always the possibility that, whatever you achieve on your turn, the next player has tools in hand to undo it. This sometimes lends your actions a feeling of grim futility, as you do the best you can only to see your opponent sweep it all away with objectively better cards.

On the other hand, despite there being no baked-in catch up mechanisms, with 3-4 players you’re mostly going to be wanting to work together to take down whoever appears to be in the lead. This is where Elector Counts is at its most fun – the wild shifts in fortune, the partial knowledge of what someone might have committed to a location based on the cards you’ve been handing them. Fortification means that players can dig into a location, so you can absolutely develop a board state.

In the end, if you like the Warhammer setting, Elector Counts is a quick-playing area control card game that takes a little while to reveal its nuances. Once everyone is familiar with the card pool and understands how the cards you give away can be as important as those you play, there’s a fun, end-of-the-night melee waiting in a refreshingly small box.

TRY THIS IF YOU LIKED Yomi

The showdown nature of Elector Counts is oddly reminiscent of 2 player beat em up card game Yomi. Fans of area control deckbuilder Sorcerer might also enjoy the theme and the scope for more players.