In 2013, Fantasy Flight Games announced Eldritch Horror, a streamlined re-implementation of Arkham Horror. Released in 2005, Arkham now has eight expansions - including an expansion for the other expansions! Entertaining as these additions are though, they often make an already heavy game more complicated.

Eldritch moves the action from the streets of Arkham onto the world stage. Despite this difference, an ancient evil still plots to destroy the world, dark cults still strive to bring about the end of days and monsters still spew forth from cosmic gates that link the worlds.

As a team of investigators, you seek to prevent the eradication of mankind and defeat the great old one. To achieve this, you move around the map, encounter gates locations or monsters and attempt to collect clues.

At the start of each game you select three cards from a mission deck. You must then complete missions one at a time, and each card provides details on how to do this. Completing a mission usually requires clues which you earn when you successfully complete a research encounter. If you manage to complete all three missions before the great old one wakes, you win.
If you’ve ever played and enjoyed Arkham, then you’re most likely going to enjoy Eldritch. The theme is the same, the gameplay seems extremely similar, but overall it’s a far more refined experience.

Since release, there have been two expansions, with a third on its way. However, even with these additions, you never really feel bogged down or overwhelmed by the mechanics. They’re not over-complicated and even the Mountains of Madness big box expansion integrates with the base game without over-complicating matters. 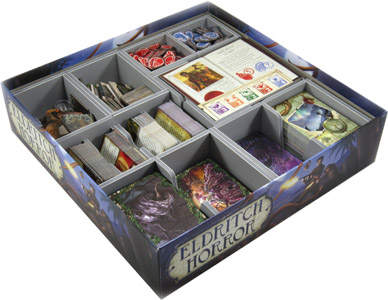