As board gamers, we are not unfamiliar with the term ‘RPG in a box’. This usually describes a game that takes inspiration from the expansive gameplay offered by role-playing games, packing campaigns, ambitious storytelling, adventures and character growth in a board game box. Dungeon Degenerates: Hand of Doom takes that to the next level, delivering something very exciting but at the cost of tremendous initial frustration.

Players are prisoners who have just escaped the infamous dungeons of Brüttelburg. They are travelling through the world of Würstreich, avoiding the law, completing quests and fighting monsters to earn experience and gold. If the bright psychedelic neon art style of the game didn’t give it away, I can confirm that the world is quite mad. It has a unique setting and lore, making exploring and discovering Würstreich a treat for any adventure lover.

The combat finds a nice balance between straightforward dice rolling and managing equipment and skills to manipulate the results to mitigate the associated luck elements. In Dungeon Degenerates, rolling low is actually advantageous as checks pass if the sum of two dice is below the skill being tested. However, the attacks take the value of the highest dice rolled, making players strive for an interesting balance of rolling low enough to pass, but having one dice value high to deal a significant attack.

However, before you get to all the aforementioned goodness, players get to feel like a bit of a degenerate themselves by playing an entirely different game called ‘I need to check what this means in the rulebook.’ The variety and gameplay richness come at the expense of a lot of intricate rules and a myriad of terms and symbols that, despite two (A4) reference cards, are not always clear. It is not unusual to dive into a rule book looking for one clarification and finding an answer that raises further questions and inspires more flicking through the pages. The first plays of the game consist of constant stops and starts, that understanding the core gameplay does not prevent. Monster abilities alone have two pages in the rule book. Through one fight you may have learnt what monsters with ‘pursue’ quality do, however, the next unfriendly creature has a ‘frenzy’ ability and here you go diving into the rulebook once more.

Dungeon Degenerates is a game that requires investment. Its biggest request is right from the onset as learning the game is not a smooth experience. Overcoming the initial stunted pacing of the game as it is interrupted by the need to refer to the rulebook will be the biggest hurdle. The next commitment – to the campaign – is the fun one. Würstreich is a beautifully mad world, crafted with so much detail and wonder. If you figure Dungeon Degenerates: Hand of Doom out, you will not regret it!

Dungeon Degenerates: Hand of Doom’s psychedelic neon-coloured world is wonderfully peculiar in setting, characters and gameplay. To appreciate the full richness of this game, players will need to make it past the first and the greatest enemy of the game – the rules! 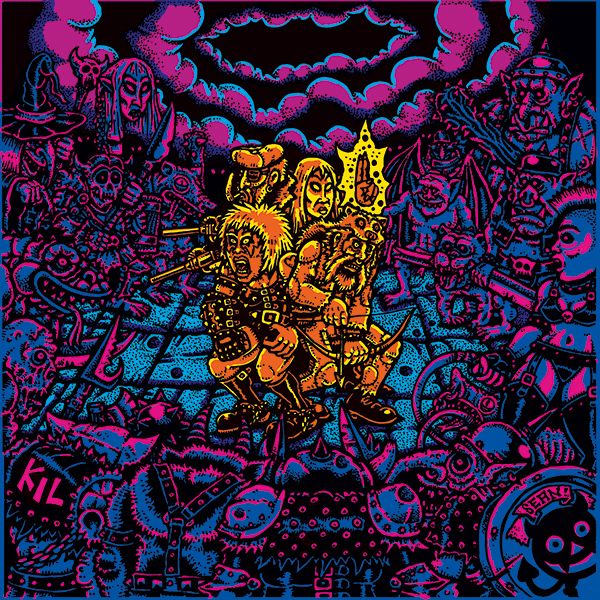 TRY THIS IF YOU LIKED… ELDRICH HORROR

Two worlds that are enticingly mad in their own ways. Both games succeed at drawing in players by the beautifully grim crafting of their setting and through challenging gameplay.