Roll with the gods in this light and bright dice-crafter

At some point in their life after rolling non-stop ones and twos, everyone has wanted to pick up an errant die and rip the faces right off it, creating a perfect die that delivers the ideal result without having to contend with their stinking luck.

Dice Forge takes the inherent satisfaction of seeing numbers get bigger with the pure physical joy of popping plastic pieces together and apart (Lego fans, listen up), mixed with a little bit of tense luck.

The crux of the game is rolling a pair of customisable dice to gather resources and victory points, which can be traded for new dice faces and ability cards, allowing you to earn slightly more resources and points, and so on.

It sounds repetitive but, in practice, the joy of seeing a newly-purchased face rake in bonus gold or the two elements used to buy cards is so immensely pleasing that the simple dressing lets the core gameplay shine. The ten rounds of the game whizz by and never get bogged down by complex calculations or having to overthink how to achieve the best probability on a die roll – it’s just a joy.

After all players roll, each player’s turn essentially consists of a single action: buy a die face with gold or buy a card using sun or moon shards. Hot tip: an extra action can be purchased using two sun shards, making it valuable to invest in those dice faces early on.

The cards’ effects range from the simple – extra points – to the more involved, such as extending the amount of resources that can be stored on a player’s board, unlocking bonus die faces or offering a way to invest spare gold to earn bonus points using a separate tracker. Most take effect instantly, but some can also provide ongoing benefits – such as the chance to re-roll and gather more income. There are actually two different sets of cards that can be mixed and matched between games to shake the options up, but even the default cards are varied enough for plenty of fun. 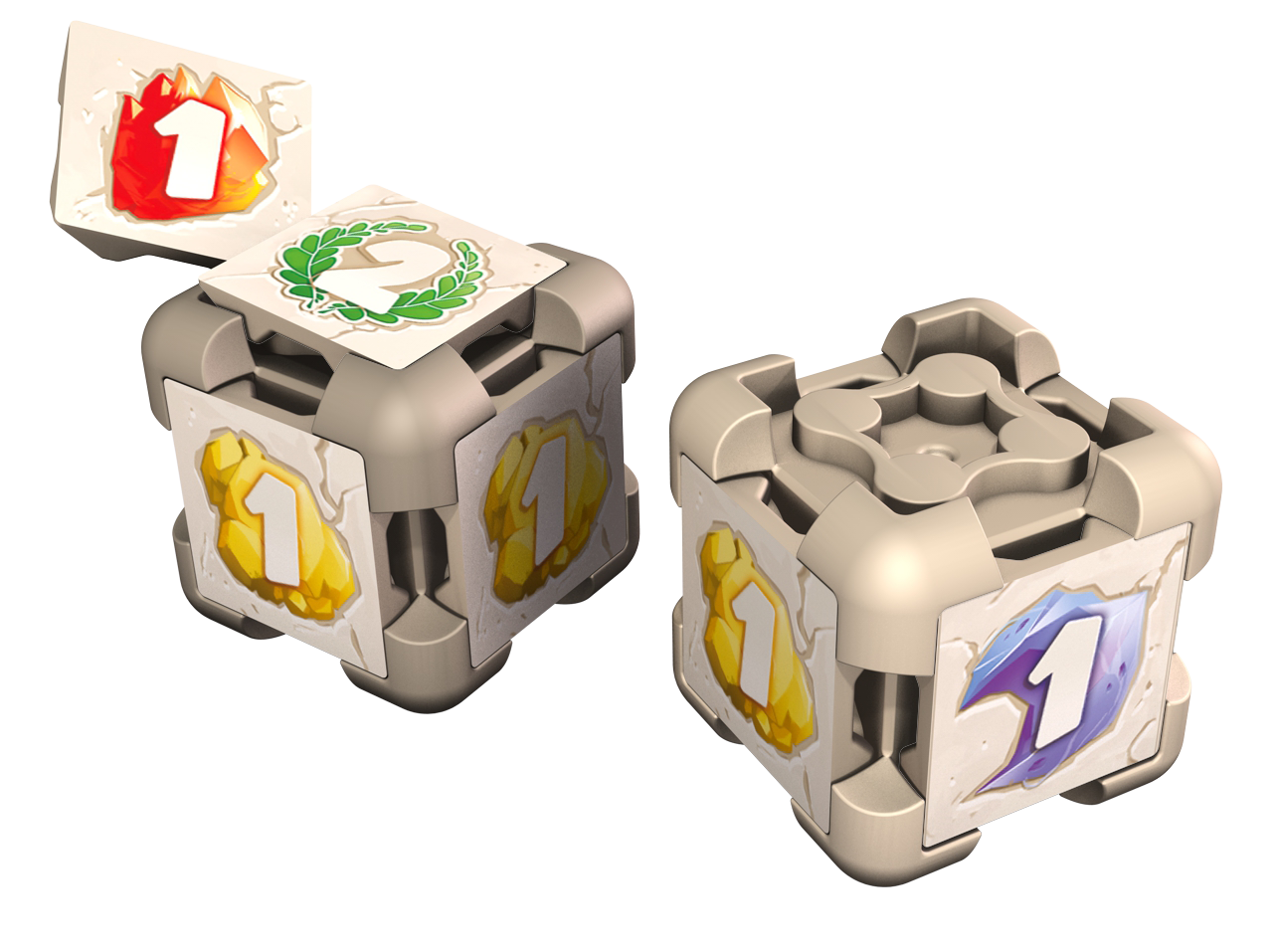 There’s a light amount of player interaction in the limited number of die faces and via some of the cards, as well as in the process of buying a card – if another player ‘ousts’ your pawn from that space by buying a similar card on their turn, you earn an instant re-roll, making it sometimes more beneficial to hold off for a bit. This means playing with three or four people makes the game notably different – and is probably the ideal way to go – but it works just as great with two, too.

Although the game can be fiddly to unpack and set up the first time around, the box is cleverly packaged to make subsequent setups very quick indeed, and is even designed to become part of the playing area by serving as a 3D temple to tie in with the Greek mythology theme.

The artwork looks great, popping with bright colours and stylish cartoon takes on iconic monsters including Medusa, the Minotaur and Hydra and, when slotted into the main board, the cards extend the main image and make the entire layout a real sight to behold.

Dice Forge is light, bright and loads of fun to play. It’s got a fantastic look and simple rules, but offers enough below the surface to make it more than a one-note gimmick. You’ll want to pop off dice faces long into the night – and, this time, for all the right reasons.

The cartoon Greek mythology theme is a winner thanks to its clever execution and gels brilliantly with the deeply satisfying dice customisation that powers Dice Forge along. It’s easy to learn, snappy to play and simply a joy to experience.