With its cut-down ruleset and murderous combat, Death in Space is a starkly beautiful take on old-school roleplaying. It takes the kind of peril normally only found in deep, dark dungeons and propels them into the void between the stars, revelling in a grimy, industrial aesthetic that makes the horrors of the Alien universe look like a pleasant holiday.

If you’ve been paying any kind of attention to the realm of old-school gaming for these past few years, it’s not hard to see where Death in Space draws much of its inspiration. Everything from its ruleset to its punkish aesthetic pays homage to Mork Borg, the current blood-spattered darling of the indie scene. However, though Death in Space shares many similarities with its illustrious predecessor – including its publisher and an ‘additional writing’ credit for MÖRK BORG’s creator, Pelle Nilsson – it is much more than a simple sci-fi reskin.

The game is set in a distant, gloomy future that is laden with doom and decay. The tech is fantastical, with lasers and FTL beacons and AIs all over the place, but it all comes slathered in a coating of grime and rust. The lasers only work if you hit the power-pack just right, the beacons are winking out across the galaxy, and the AI that runs the ship’s mess is going slowly crazy. The entire universe is collapsing in on itself and weird whispers and injecting themselves into the radio channels.

Though the setting itself is only sketched out, it’s a compelling place to explore. The designers have carefully balanced their worlds on the brink of despair, leaving just the tiniest sliver of hope that you and your crew might be able to get out. Or, at least, make yourselves as comfortable as possible before the end comes.

The crew in question are all-but guaranteed to be a mixed bunch of weirdos, wanderers and runaways. As with most of its old-school kin, Death in Space loves rolling on random tables, and the results that character creation can spit out are truly impressive. There are no classes, but a handful of rolls can help forge a space explorer that feels truly distinct. You might end up as an AI trapped in a meat-body, or a void priest looking to embrace the end of reality. It’s easy to die, but it’s also easy to roll up a new vagabond and slip them into the hole left by your old character. 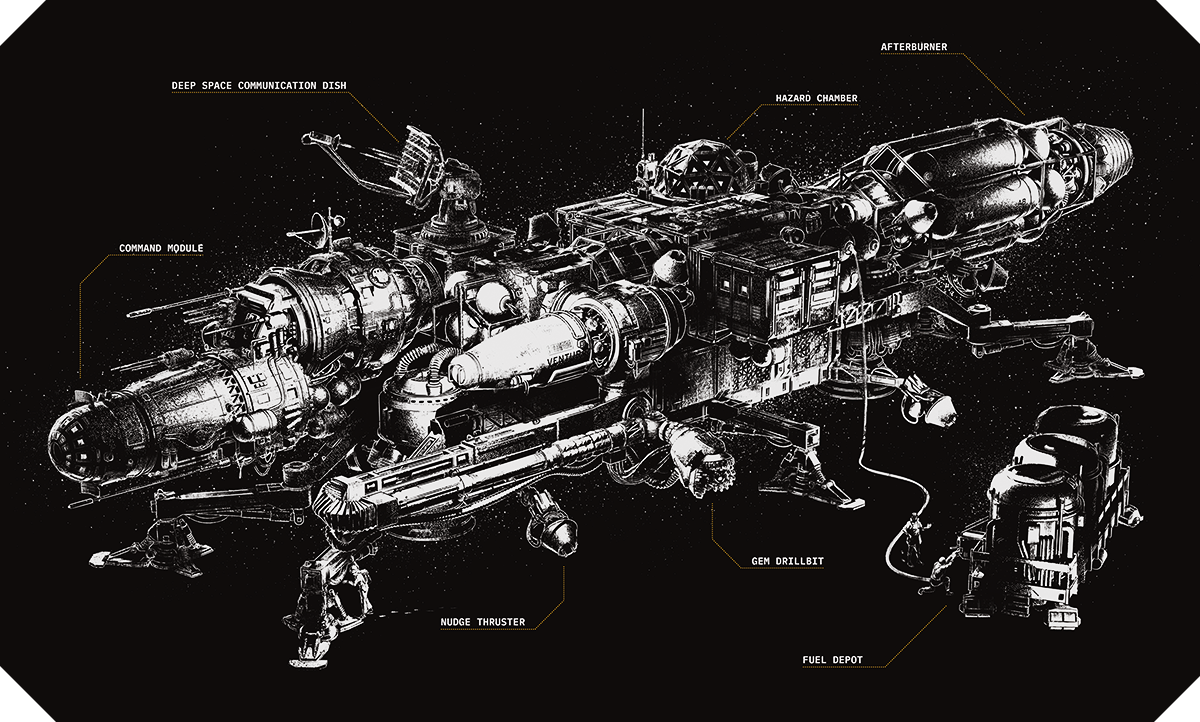 Just as important as your doomed space travellers is your hub – the battered ship or station that serves as your home base. This comes with its own modules and opportunities for expansion. If you don’t have anything more pressing to handle, it also serves as a motivation for your adventuring and salvaging – the hub always needs more fuel and fresh repairs.

The rules that drive the adventuring are ultra-basic and deeply brutal. Their general feel and shape are clearly inspired by classic D&D – as well as its countless clones – but are pared back as much as possible. Checks are completed with a single roll of a d20, plus a modifier here or there, and even complex actions like interstellar travel or ship-to-ship battles are handled with a couple of abstracted tests.

Combat is a delightfully dangerous affair. It runs swiftly and easily, with a level of lethality that gently pushes players to focus on avoiding fair fights and stand-up brawls. Most characters can be taken down with a single well-placed shot, and killed by a couple of unlucky rolls.

Despite this, however, Death in Space doesn’t feel like a comedically murderous character-grinder in the way that Mork Borg does. There are systems for slowly, organically growing your home base and expanding your team’s gear in a way that gels neatly with an ongoing campaign. It doesn’t have to be a particularly lengthy one, of course, but the mere presence of these rules encourages the table to try and preserve their party, rather than toss them into dangerous situations for
a laugh.

The result is an impressively solid RPG. Its ruleset is simple enough to pick up in moments, but with just enough depth that actions feel meaningful and distinct. It can work perfectly as either an ultra-violent one-shot that ends with half the party sucking vacuum, or a foundation for a snappy campaign that can see its characters kindle a little bit of hope in the void. Or, perhaps, a little less misery.

Brutal and beautiful by turns. A sci-fi showing of the best that rules-lite gaming can offer.

TRY THIS IF YOU LIKED Those Dark Places

The violence and tech levels are ramped up, but if you enjoyed Those Dark Places gloomy take on sci-fi you’ll love this

Read our review of Those Dark Places here!