Executive golf gifts used to be all the rage – very small golf sets designed to sit on your desk next to a Newton’s Cradle (the click clack ball thing). Crash Octopus is, in some ways, the inheritor to this throne – but, you know, really good.

It’s another amazing piece of work from itten, the design studio and publisher who brought us Tokyo Highway. Crash Octopus has similarly interesting uses of space, although a little more straightforward. The game is part party game, part dexterity game, and part… sport? Snooker is a ‘sport’ right?

Set up is always a bit weird in an itten game. Here you’re making a rough circle with a rope to represent the play area. You then place the (bright pink wooden) giant octopus head in the centre, and space out the tentacles around it evenly. Then you drop a load of treasure on its head. More bits of nicely made wooden shapes. They scatter around pleasingly for the most part, having hit the ‘dome’ of the octopus. And then you place a few boats around, an anchor behind each, and pop their flag in the hole of the anchor. 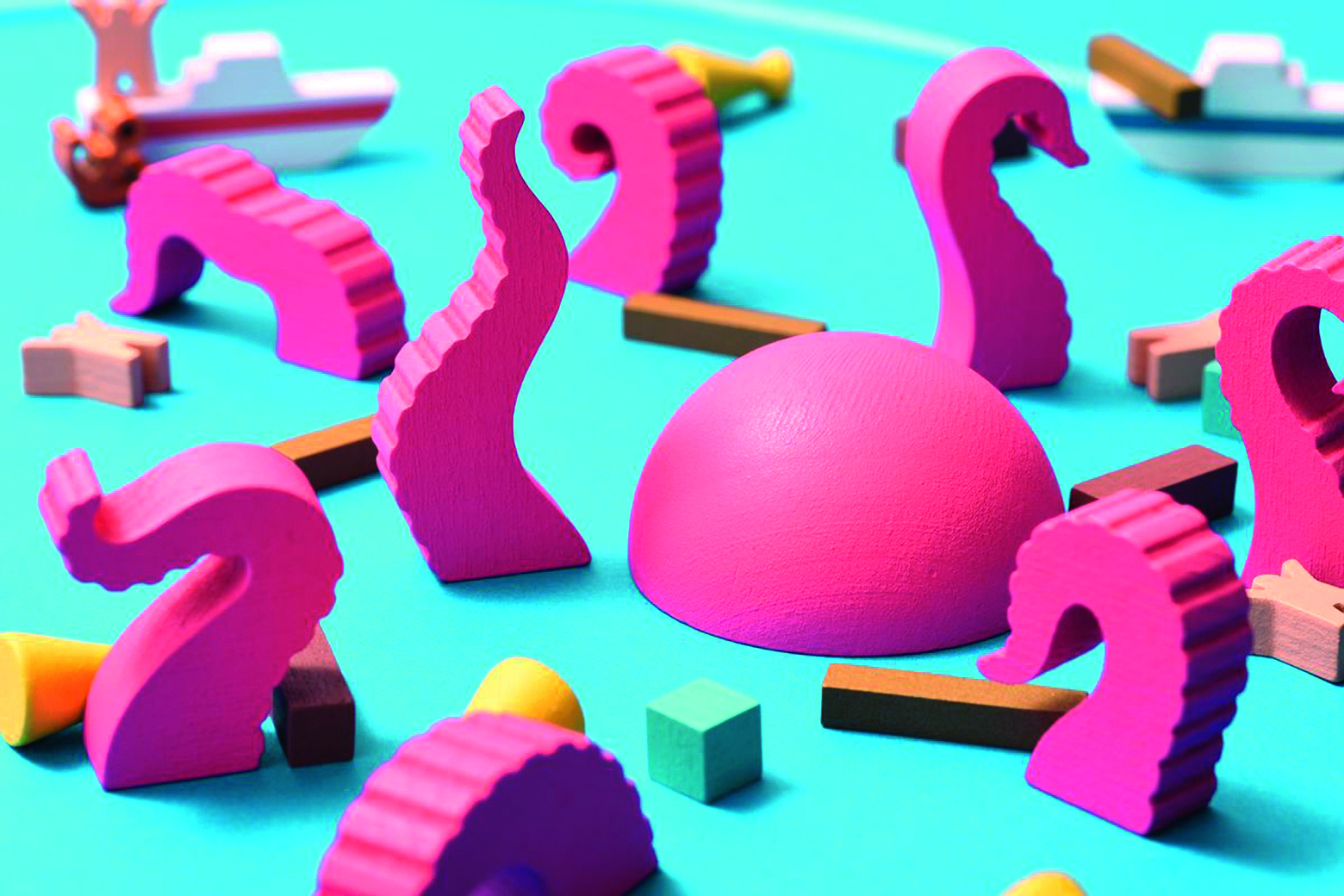 Players choose which boat is theirs and then take one of two actions – flick a piece of treasure toward their boat using their flag, or, flick the anchor to move their boat to an adjacent location.

To win, players need to collect one of each of the treasure type to their boat, which they do by flicking it into the boat, and then placing it on top. Naturally, if you knock something off your boat by firing treasure at it, it stays off, bobbing in the sea. Something confounded further by not being able to select the closest treasure. Every time a treasure is collected the crab track moves on one (it’s a crab that moves up one bead on the string that denotes the play area), once you pass a black bead, it’s octopus attack time.

From here the players take turns dropping dice on top of the octopus head, hoping to knock over someone else’s treasures. It’s surprisingly possible to ‘aim’ your shot by dropping it on different areas of the octopus head, and if you miss, you get the chance to move the head or a tentacle adjacent to the dice position. Smart, or mean, players will be blocking their opponents, snookering them, some might say.

This being an itten game, there is a friendly approach to knocking each other’s treasure off – you can’t do it with your own flicks, that’s for the octopus – with instructions to politely put the pieces back. As such, it’s less take-that than it first sounds, and does have all the competitive feel of sports.

At two players, the game is a thoughtful game of tactical choices, angles, and high-pressure shots. At three or higher, it hits lofty party game territory where you’re likely to be swearing at one another a bit after a really well placed octopus thrash. At five players you can add a pirate ship, which can antagonistically muck things up for others. The additional mini-expansion of the desert island (which offers another way to pick up treasure by flicking your anchor at it) brings even more choices when it comes to putting together your winning strategy. You can feel here how the game intentionally adds increasing crescendos of chaos the more people you add to the game in perfect servings.

Flicking treasure around with what will remind you of a Nandos heat indicator is likely never repeated, nor be as perfect. Extra hot half-octopus and peri-peri chips anyone?

There’s nothing quite like an itten game – sitting at a perfectly pitched, but weird, place between art piece, a board game, and, er, sport. If you’ve previously been turned off by the serene nature of itten’s past work, like Tokyo Highway, then Crash Octopus has the chaotic, beautiful fun to win you over. Brilliant.

TRY THIS IF YOU LIKED Tokyo Jidohanbaiki…

If the dexterity mini-games in this box brought you joy and anguish in equal measure, Crash Octopus is the perfect refinement of those feelings.