Conquest: The Last Arguments of Kings 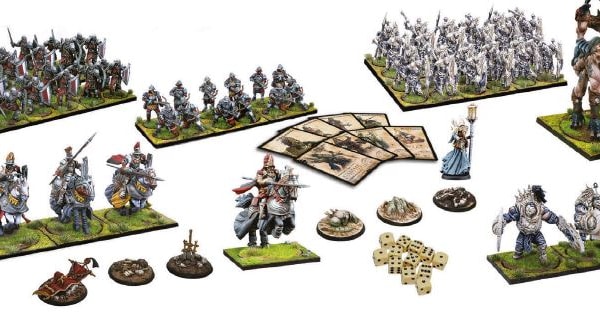 Marching onto new lands with only a few missteps

One of the great strengths of Conquest is its aesthetic. With a visual style equal parts Renaissance artwork and Dark Souls, filled with ornamental armour and masked monstrosities, it’s clear that its creators – including former Warhammer 40,000 and Lords of the Rings Strategy Battle Game designer Alessio Cavatore, who handled Conquest's ruleset – have spared no expense in creating a setting suitably grimdark for their new wargame.

The miniatures action itself is of the rank-and-file variety, using regiments comprised of square-based figures with detailed rules for movement, reforming and attacks on the front, side or rear thanks.

Combat is a quick, bloody affair; unlike other wargames where players roll to hit, then wound, attacking units simply roll once to determine whether a blow has been landed. Comparative modifiers (the attacker’s strength versus the defender’s toughness value or suchlike) have been completely eschewed in favour of a simpler method of having a base armour save value.

Special rules are layered over this system of rolling to hit, rolling to save; depending on the type of blow inflicted, the defending unit may suffer a negative penalty to their armour value or have to re-roll successful saves. It’s a simple system that saves time by not forcing players to continuously resort to comparison charts.

Combat is further sped up by the morale system, which requires players to roll for additional casualties after a regiment loses units. It certainly makes for a quick game overall, but can feel a bit punitive at times.

The real gameplay standouts are Conquest’s two signature features. The first is the way deployment works. Instead of setting up armies at the beginning of the game, players roll each turn to see what class of unit (split between light, medium and heavy) will arrive. Light regiments show up earlier in the battle, with medium and heavy units entering the fray later on. It’s a clever system that prevents games from becoming stodgy ‘line-up-and-fight’ affairs, made more nuanced by the addition of a battle line, which allows a player to bring in units from the sides of the table as their forces gain ground.

The other major feature is Conquest’s card-based activation system. Players have a stack of command cards, with each corresponding to a given unit. A turn alternates between players as they activate each unit, which they do by playing its card. The twist is that players have to arrange their command stack at the beginning of a turn, locking them into a sequence of play regardless of their opponent’s moves. Much of Conquest’s appeal comes from working out what order to activate your regiments in, an element of forethought and planning that adds to the tactical depth.

Beyond the mechanics, however, the core box itself is somewhat anemic; each side feels more like a taster force than a fully-fledged army. Though most wargames do this to compel players to invest in the game, it feels particularly noticeable here. The dearth of regiments may also be down to the purely physical consideration of how many sprues can be fitted into the box. The figures are 38mm in scale – a size that few if any other game s use – and compared to regular 28mm miniatures even a baseline Conquest human is virtually ogre-sized. It’s a very disappointing move as it severely curtails much of the interchangeability that is the lifeblood of wargaming; most gamers’ scenery will be the wrong scale and there’s little chance of using the miniatures as proxies for anything else, despite the fact that the core box’s human faction are essentially just medieval soldiers.

Overall, Conquest hits more marks than it misses, and is worth a look if you’re interested in seeing a new take on fantasy mass-battle systems.