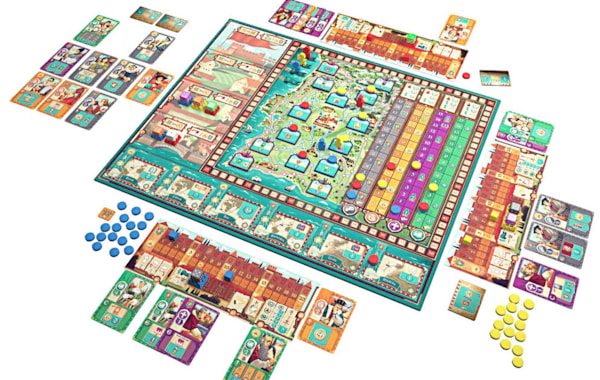 Intimidating to open, but a drafting delight to play

Your first meeting with Coimbra is overwhelming.

As you unfold the board and see three different sections, including a track with four scoring categories, you begin to get anxious. Then the individual player boards come out, each divided into six sections and, to top it off, with two resource tracks. Once you start sorting out cards and tokens, all a smorgasbord of symbology, the enthusiasm of opening a new board game slowly wanes as you begin to think you will never be able to learn or understand how this medieval labyrinth of a city operates.

Then, not even a full turn in, something almost magical happens. Everything starts arranging itself into a logical robust structure laid out so well that the initial apprehension disappears completely. While not every aspect becomes immediately clear – you’ll still find yourself looking up a symbol or two in the rulebook on occasion – the rest of the game becomes almost intuitive.

Coimbra is only four rounds long, each divided into a sequence of actions indicated on the player board. Having that as a reference immediately sets out the pace and gives players a clear structure, making the game fairly straightforward, despite its first appearances.

Drafting dice is a core mechanic, informing and feeding into all of the player actions for that turn. At the beginning of each round, the dice are rolled and players claim them depending on what they want to do. From one roll everything is set out for that round. The value on the dice determines which player gets to pick up cards first, but also how much it will cost them. A six-value die might be worth to get the first pick of a really good card, but will also cost a player six points of currency.

The colours correspond to one of the scoring tracks on the board, allowing players to perform their respective actions. That six-value die may have the right number but it might also be purple – triggering pilgrim movement in the centre of the board – when, instead, the player needed a yellow die, which would earn them gold to spend on their next turn.

There is definitely a lot to think about and, while it sounds convoluted, the visual assistance of the game really does a good job of holding the player’s hand every step of the way.

Every turn in Coimbra brings a sense of achievement. While placing dice, taking cards, going on voyages and moving pilgrims around the map, players start to build an engine that ensures that next round they can do or spend more. The benefits of investing in an area of the game are immediate, and actions spent never feel wasted. Even if you don't get to do exactly what you planned because someone took the die or card you wanted, your action will prove useful.

As for the rest of the game, the end scoring equally has many parts. Everything you can think of scores points in Coimbra – it may be almost too much. It’s not necessarily confusing, but Coimbra’s end-game point tally does have an element that feels out of place or at least unnecessary. There is a little set-collection mechanic, where cards have different-coloured medals that earn points. It feels tacked-on and completely unrelated to the rest of the game. It doesn’t have a major effect on the game, which in this case doesn’t work in its favour. If this mechanic was dropped completely, it’s doubtful players would even notice.

It may have too much going on, but Coimbra knows how to handle it well, even with a small misstep. There is a lot to take in, but there is equally a lot to like.

Coimbra is a very solid Eurogame. It has an intimidating façade that quickly crumbles, leaving behind a solid structure that makes the game both clear and fun to play.