A bonnie time with whiskey and cheese

Whiskey is distilled from a mixture of grains, the unique mash of barley, rye, wheat and more lending each variety its distinctive taste and aroma. It only seems right, then, for a Eurogame about making whiskey to be similarly composed of a mix of ideas from other games. Luckily, Clans of Caledonia turns out to be an incredibly fine blend indeed.

Let’s give the heady brew a sniff. Mmm, there’s the asymmetrical factions and gradual engine-building acceleration of Terra Mystica (but thankfully with the modular map of its sequel, Gaia Project), with the flavourful need to fulfill export contracts as in Voyages of Marco Polo, plus just a hint of the dynamic market and trading of Navegador. Even the illustrator of Agricola and Isle of Skye is here, lending his deft rural visuals to what appears to be yet another Eurogame about farming (both literally and metaphorically) for victory points.

So, you could hardly call Clans original. The thing is, that doesn’t matter one jolt when you’re actually playing. Because this is a creation that takes ideas from other games and combines them into a single, utterly fantastic experience. It’s a Eurogame greatest hits collection, with the emphasis on ‘great’.

Each round, every player repeatedly takes a single action until they pass. You might hire another woodcutter or miner to up your income (paying both their salary and the price of the land), with the chance to invest in their tools to further increase your revenue at the end of a round. You could instead purchase livestock – sheep or cows – that provide the chance to produce wool and milk, or be later butchered for meat. That milk can be turned into cheese if you have a dairy, while grain from fields can be processed into bread or whiskey, depending on your taste. It’s not a case of typical worker placement, but gradually expanding your clan across one of the game’s more than a dozen map variations, upgrading your shipping ability to cross rivers and lochs in search of the best pastures. This all goes towards fulfilling export contracts, earning both instant rewards and end-game points, which serve as the main way to take your clan to the top of the Highlands.

All of this is easy to track and parse thanks to outstanding visual design and a brilliant streamlining of the core gameplay loop. The relatively tight pool of options offers plenty of potential strategies – do you go all-in on cheese, hedge your bets on whiskey or try to balance? – but you’ll rarely need to check the rulebook after a first reading, with the various boards doing an excellent job of keeping the potentially heavy weight feeling light. They even add up your income from workers for you!

Let’s not forget about the clans themselves. Each has a distinct speciality that gives every playthrough an individual feel, making it exciting to discover how to use your particular talents to the full. They’re significant, too: Clan MacKenzie can age their whiskey and sell it for extra profit with a Vinhos-recalling mini-game, while Clan Stewart excels at haggling for goods at the shifting market and Clan MacDonald rules the water with fishermen. There’s the option to play without the clans for a more symmetrical experience, but stepping into the kilts of the butter-churning Cunninghams or industrial-minded Campbells gives the mechanical elegance a heartfelt sense of place and personality. If the gameplay is as clear and smooth as a glass, its differing clans are the fiery liquid waiting to sipped from inside.

Effortlessly suave, endlessly captivating and created with a clear reverence for the classics without feeling trite, Clans of Caledonia takes old favourites and turns them into a new favourite. We’ll drink to that.

Clans of Caledonia takes some of the best strategy games out there and brings them together with a good gulp of Scotch for an intoxicating blend. 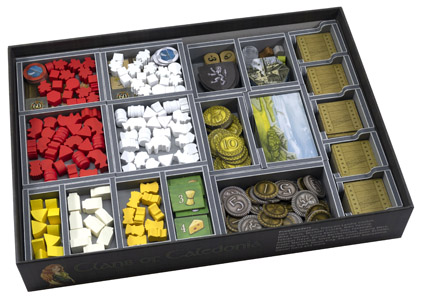 Compatible with Clans of Caledonia®, both original and revised editions.