Roll to seduce the dragon

Matched.com, Plenty of Fish, and of course: Tinder, these dating apps focus on trying to put together two compatible humans and sending them off into the world on dates with varying degrees of success. Of course, if you watched The Hobbit and debated the best way to catch the eye of Smaug, your dating app options are pretty limited. Enter: Cindr, a ‘cantrip app’ that you can cast to get playing the dragon dating game.

Cindr is a push your luck dice game that shares a lot of design inspiration from its rhyming partner, except the images are (arguably) more magical and fantastical than you may find elsewhere. I can only imagine the designers sat down one day to discuss how much fun could be had by scrolling through Tindr, followed up by a story of how a D&D game player tried to convince the DM to allow them to seduce the dragon, and ran with the two ideas. Surprisingly, it works pretty well.

You’ll build your own profile, creating a character with specific personality traits. The game has a lot of nods to D&D, and it’s fun to actually make the most of the character given, building them into someone. The game seems to shine most when this aspect is embraced, as it adds in a narrative – it’s fun to create a Strahd-esque character in the vampire-like profile: Likes Bats, dislikes Garlic. You’ll fill in that, plus names, pronouns, and compatibility features, such as whether you are a hoarder, investor, or spender when it comes to treasure.

Then it’s on to finding your match, where you’ll draw cards to see who crops up on your Dragon Cindr app, selecting them based on their description, or choosing to swipe left if they don’t seem suitable. If you like the look of one, you might take them on a date, which are drawn from a dating card stack. This might see you at The Undermountain exploring, binge watching your choice of film, or at The Celestial Palace for a spa day. How successful your date is depends on firstly, whether your compatibility choices match with the dragons, which will assign you dice, and then secondly the outcome of the dice rolls themselves. Rolling hearts gets you love points, but three flames see you get burned. 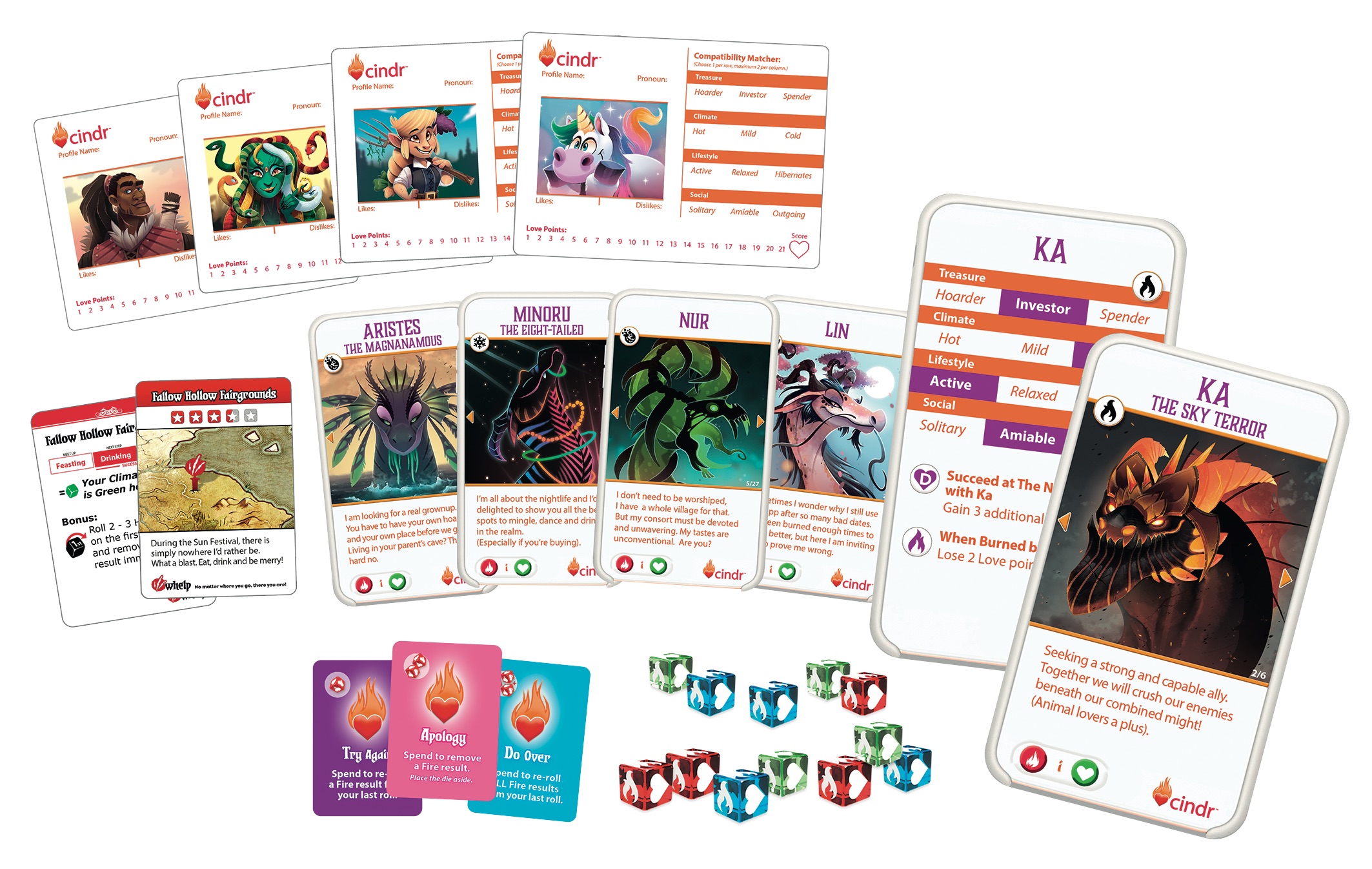 Hopefully after a successful first date, you may want to push your luck and take the next step – so at the Undermountain, that would be a picnic. This is a gamble, because if you burn out you’ll lose your points, but you can pick up even more with a third successful date – which from the above example of The Undermountain, sees the final date having you combatting evil. Of course. Do you risk another date for the extra points, or play it safe and give up early? Of course, if it all goes a bit wrong, you might have a second chance card to fix things (one presumes this to be flowers and chocolate).

It’s a decidedly light game, and while it takes 30 minutes or so to play, you’ll find there’s enough laughs and enjoyment in there with your pals around the table that it can often last longer. The more theatrical in our group offered improvised scenarios for how the date really went down, added in the odd anecdotal complaint about similar real life dates, and compared it to RPG scenarios. There’s no requirement to add this sort of play in in order to play the game, but it does escalate it from a perfectly okay game, to one you’d reach for on a game night.

There’s plenty of fun to be found, especially if you like similar games. This love letter to dating apps and RPGs of a game has a sirens call, and who knows? If you listen, maybe you’ll find your fiery match.

A light fun game with dragons and dice. Now where have I heard that before?

TRY THIS IF YOU LIKED Zombie Dice

A change in theme from the undead to romance, but it includes and expands on the mechanic.