Get your stone back

With a growing team of trusty dwarves, scavenge for resources, excavate, then furnish your cave to demonstrate superiority over your rival.

The Big Box includes the Cave vs Cave base game and the first expansion altogether. This splits the game into two eras that can be played individually or sequentially. Era I is fun and quick as a stand-alone, but if you’re looking for a longer game, you may like to bolt on Era II from the expansion material.

On each round, a new action tile is added to the central display. Players take turns to select and execute actions, which are then blocked for the rest of the round. As players excavate their caves, new rooms become available to compete over. Some rooms are difficult to construct, requiring certain configurations of walls and high resource payments, but giving valuable points or effects. Resources are tracked on separate boards and are gained and spent through specific actions and room activations.

Time and resources are short, so you’ll want to construct rooms that work well together - increasing one resource to allow you to pay for another or perhaps adding an effect to a well-used action. Benefits are often marginal in Era I and turns frequently feel suboptimal, but it’s about incrementally improving your position in order to gain valuable rooms, which ultimately score you victory points.

There’s competition over the rooms, though in practice, players usually develop divergent strategies around their activation abilities, so a new room may fit better in one cave than the other. The actions, however, can be hotly fought over. There’s much joy in taking the action that you need at a critical moment, particularly when simultaneously preventing your opponent from executing their master plan. Just concentrating on your own cave gives you plenty to think about, but retaining an overview of your opponent’s helps you predict behaviour and thwart their progress; and with just two players, that’s achievable. This is a game of oneupmanship; you’re playing for bragging rights.

Era II adds four more rounds, extra resources, new actions, a load more rooms and your cave doubles in size. But now the scoring also changes, which is mildly interesting. Gold becomes less valuable as weapons and iron come onto the scene, so your Era I strategy and the rooms in your main cave may feel underpowered in this new environment. Crucially though, Era I rooms are scored again at the end of Era II and a third time if you’re measuring an overall score, so your strategy for the early game should reflect that. 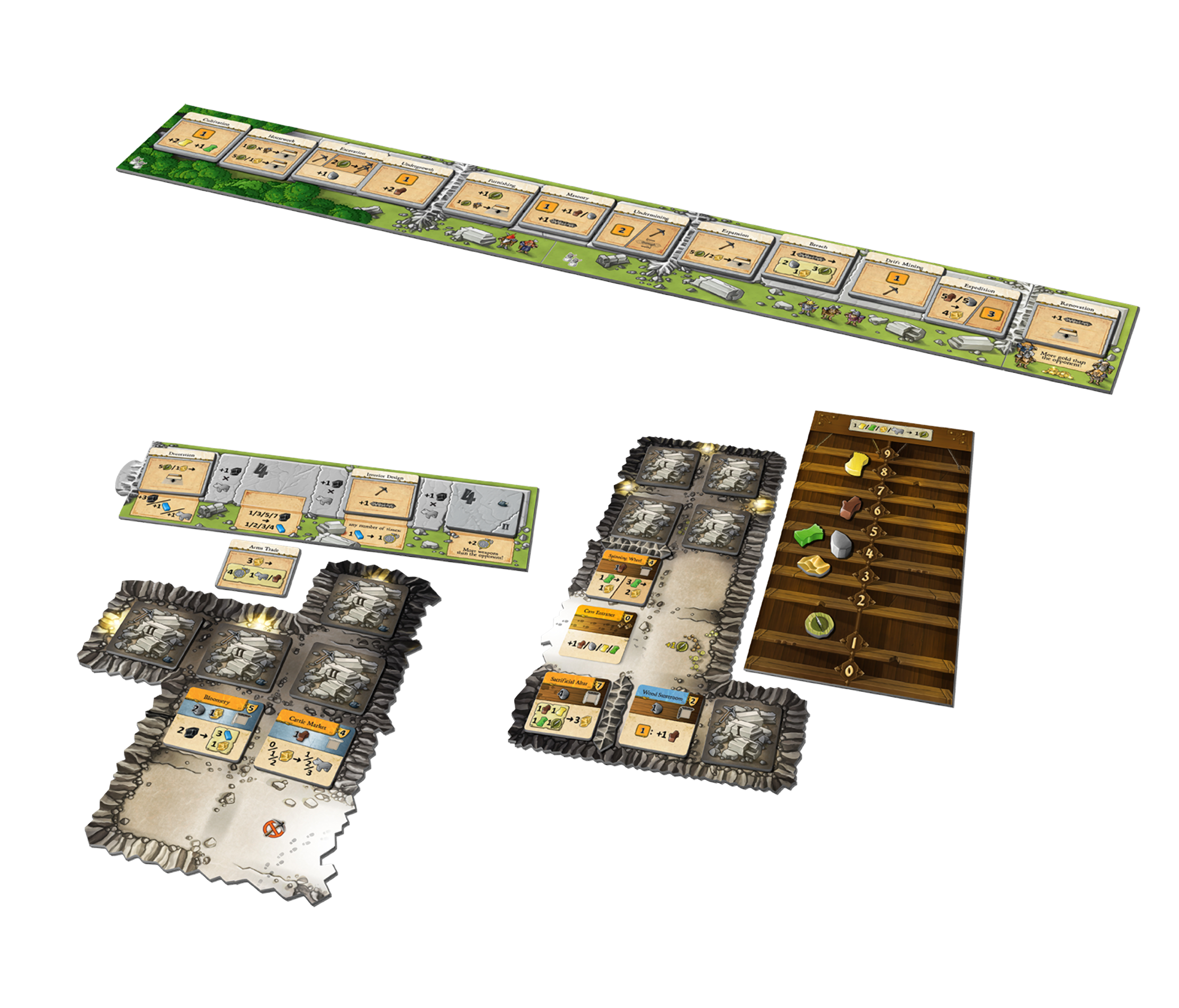 The management of resources becomes fiddly in Era II, where you’re tracking 10 different items and here you may lose sight of your opponent’s gameplan. It’s easy to become overwhelmed by the multitude of icons and the variety of options and this only intensifies as excavation adds more rooms to the pool. There’s almost too much choice and this may slow the game down for some players.

If Era I is about engine building, Era II is about running your engine. These four new rounds are longer and actions are more powerful. But despite the introduction of all the new stuff, it really just adds extra time, rather than changing the gameplay significantly. Part of the attraction of the original game is the pocket-size 20-minute head-to-head engine building experience, extend this and it loses some of its appeal. If I wanted a longer game, this might not be my first pick.

Thumbs up for the original game, but while Era II increases the component count and tweaks the scoring, it doesn’t feel like it adds anything particularly meaningful.

TRY THIS IF YOU LIKED:  Agricola: All Creatures Big and Small - The Big Box.

This is an obvious comparison. Both games are quintessentially Uwe, with his favoured worker placement & tile placement mechanics and the addition of expansions.