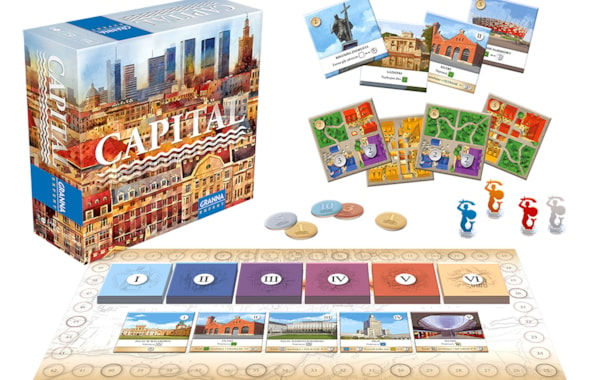 This rewarding historical tile-layer is a hidden gem worth uncovering

Really, Capital should be called Warsaw, because the history and personality of Poland’s largest city permeates the game’s theme and mechanics to such a degree that it would be a far lesser experience without the detailed background information explaining the city’s higgledy-piggledy mix of old and contemporary buildings and landmarks. Yet, even without the fascinating real-life reasoning applied to Capital’s tile-laying gameplay, playing it would still be an excellent time.

Each player is working to build up a district of Warsaw over six epochs, beginning at the end of the 16th century and going through both World Wars. To do so requires placing down tiles with vibrantly coloured-coded quarters to represent various areas, from residential and parks to commercial and industrial – anyone who has played another city-builder (or SimCity) will be immediately at home.

In-between paying to construct the best score-generating layout they can (putting homes near parks and keeping smoggy industry away from residential and so on) one tile at a time, players pass unused tiles to the player next to them. The light strategy introduced through this drafting makes Capital the tile-laying equivalent of Sushi Go: a fast pick-up-and-play treat that's perfect as a thematic gateway game, with a pleasantly different experience for differently-sized groups.

After every player has placed or discarded four tiles, a district milestone is awarded to one player at the end of every epoch, based on sub-objectives that vary with each match due to the milestones’ double-sided faces. Landmarks and public buildings can also be constructed during the rounds, lending special abilities that can be crucial to victory, as well as the chance for a little more player interaction.

While turn-to-turn actions are very basic, the decisions remain complex even with the normal tiles – do you build industry and commerce to earn more money to invest in better buildings in future rounds, or focus on racking up a steady supply of victory points?

Although the box artwork is pleasant, if as uninspired as its title, the thick tiles are gorgeous, with either bright squares of the key zones or watercolour renderings of famous Warsaw locations. The rulebook offers an expansive amount of detail into the importance of each building and even has a paragraph helpfully explaining why players’ pawns are adorable plastic mermaids.

The inclusion of the two World Wars is done so in a way that acknowledges their severe effect on the city itself but while tying this effectively into gameplay and remaining positive about its overcoming of difficult times rather than dwelling on their horror.

This level of care even extends to the box inlay, which is one of the finest we’ve ever encountered – the whole title is a success of small details and clearly loving treatment applied to theme, gameplay and components alike.

Capital is a game distinctly about Warsaw, which celebrates and embodies the city’s evolution and character without requiring a familiarity with or even interest in the European hub to play. The gameplay does a wonderful job of reflecting the real-world ingredients that make up the city and mechanically involving players in a simulation of Warsaw’s history while simultaneously balancing simplicity and complexity to achieve a massively fun experience that works outside of its framing.

Many people will likely overlook Capital due to its nondescript box and lack of knowledge of Warsaw, but they shouldn’t: this is likely to become an underappreciated treasure that deserves to be celebrated as much as the city that inspired it.

Capital is a wonderful game that offers so much: fun, fast, easy gameplay with deep and fulfilling complexity ready to discover below the surface and the chance to learn more about one of Europe’s most captivating cities, all wrapped up in a beautiful package. It’s an ideal gateway game, but everyone should experience it for themselves.