An ecosystem in your pocket

Sometimes the theme in board games are just shiny coats of paint used to bring the whole presentation together. Other times it drives the gameplay, allowing players to transport themselves into a new setting and take on different roles. In Canopy, the theme is an ethos.

It is primarily a two-player game (with one-player and four-player variants) about building an ecosystem in the rainforest. Through the course of three rounds – seasons – players will be drafting cards to build their ecosystem of gigantic trees with sprawling canopies, beautiful delicate plants and gorgeous animal life. For any fellow arachnophobes out there, the latter does include the Goliath Birdeater spider, but their ability is just too good not to add them to your rainforest. Every card contains a little factoid about the animal species or the plant type, adding a very welcomed drop of educational flavour.

As is the staple of drafting games, in Canopy each card offers different abilities and ways to score. Players use trunk and canopy cards to build trees, scoring each completed one at the end of the round based on their height. Trees stay in players’ rainforest tableau throughout the play, so by the end of the game each player has constructed a lush forest. Under the trees, players can place plant and animal cards. The former score based on collected sets and are removed at the end of each round. Animals, on the other hand, offer different abilities that allow you to manipulate drafting actions or cards within your own rainforests, and even sabotage your opponents’ efforts. Players can also get extra victory points by drafting a mating pair of the animal they already have. Finally, there are bad cards, like droughts and fires, that damage your ecosystem and if you take too many of them, they will even spread to your opponents’ forest as well.

So why would you ever draft them? Well, sometimes with the bad comes the good. In Canopy, each player gets offered three stacks of face down cards. Starting from the first one, they get to look at the cards in the stack and decide whether they want to take them or pass. Each passed deck gets another fresh face down card, but players won’t be able to go back to them until the next round. If each stack fails to rise to players aspirations, they will have to be content with a single card drawn blindly from the current season’s deck. While this part of the gameplay clearly has push-your-luck elements, players always have some information to make a semi-informed decision. You can turn over the first card and know immediately that the two subsequent stacks are not worth it (as you’ve seen their offering on previous turns). Yet, on the flip side, a stack that was passed many times, gathers extra cards, and so it may be worth it for all the good and the bad it has. Giving players a bit of insight into their options, Canopy cleverly mitigates the luck of the draw and gives players a choice: take what you know or push further for a chance of better. 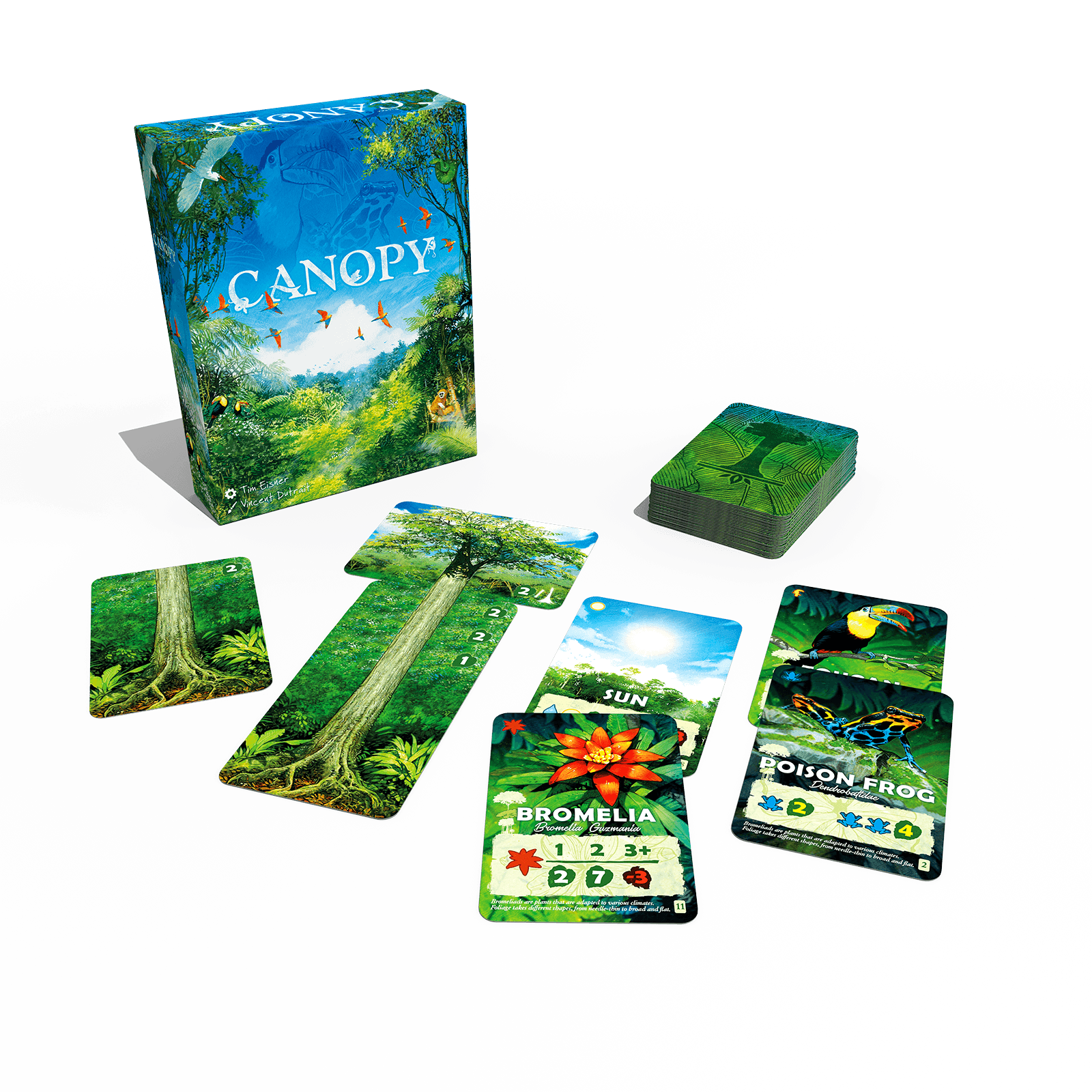 Although it all comes down to the most points, the real crescendo of Canopy is the vibrant tableau of trees, plants and animals that players assemble by the end of the game. Illustrated by Vincent Dutrait, it is a visual feast designed to make you ponder on the fragility and beauty of nature as well as our role in it. But designer Tim Eisner and publisher Weird City Games, also practice what they preach. As part of their Kickstarter, they planted a tree for each backed copy and the game itself doesn’t contain plastic. It could – if you hate spiders that much – go guilt-free into the recycling bin. But we don’t recommend that, as there is a lot more benefit and enjoyment in playing the game.

TRY THIS IF YOU LIKED ECOSYSTEM

Set in the forest (rather than rainforest), Ecosystem is also a drafting game about creating ecosystems. Although the themes of both games crossover, there is no such thing as too many games with cute animals and good environmental messages!