The Call to Adventure series was the winner of the Tabletop Gaming 2021 Award for the "I'm Surprised I'm Still Playing This in 2021", a celebration of games with staying power. You can watch the awards themselves below!

Call to Adventure is a board game about making a character, and taking them through a journey of growth and experience to eventually fulfil their destiny. The multitude of generalised fantasy tropes in that description is not, however, a fault. Rather it is a very solid base which can encompass a lot of fantasy worlds and stories because as exciting it is to create a character in a fantasy setting, it is even more appealing to do so in the familiar, beloved world. The one that, for example, exists in a well-known series of books. Having tried this out via expansion route with Patrick Rothfuss’ The Name of the Wind, this time Call to Adventure series took a step further with a standalone follow-up based, once again, on a very much beloved series: The Stormlight Archive by Brandon Sanderson.

If you are unfamiliar with the books this won’t affect your game, however, as a fan, the merging of this universe with Call to Adventure template is significant. The artwork on the cards has always been a standout feature of Call to Adventure games, and seeing key moments and characters from the novels depicted on its cards feels incredibly exciting. In any other game, this would be a minor point, but in Call to Adventure the art is so good that any card is worthy of enlarging and hanging it on the wall. Each artist’s name is clearly printed on the card. It is astonishing to see how many different people contributed to the deck, adding their unique characteristics to the scene, while also making it feel like every card belongs in the same world.

In terms of gameplay, The Stormlight Archive follows the standard Call to Adventure formula. Players begin by choosing their origin, motivation and destiny cards. These are placed on individual player boards and any subsequent cards gained throughout the gameplay are tucked under them. Each turn players either gain trait cards or attempt to succeed in challenges by rolling rune tokens. These serve as an alternative to dice, but are flatter and consequently a bit more cumbersome to roll. The end of the game is triggered when players collect a number of tier III cards, then victory points are calculated to determine the winner.

This is also when players are encouraged to tell the stories of their characters using the titles of the cards they have collected. It is, after all, why you created the character in the first place. Except, it is very easy to forget this while playing the game because it has two competing goals: one is to pick up cards that tell the best story, while the other is to get the most victory points with the highest valued cards and matching set of symbols. The latter has a stronger allure as you spend the majority of the game picking up cards that either give the most victory points or best runes. At the end of the game, you suddenly remember you need to combine them in a somewhat coherent story.

The character progression is less about their journey, growth and development, but more about symbol optimisation, making creating a story an after-thought. This is fine, there are character-building games, like Roll Player that only focus on creating a character through a gameplay puzzle. This allows for a single playthrough or a created character to be ‘imported’ into a separate RPG. The same could be done with Call to Adventure. Except, here the game premise uses storytelling as part of its selling point, while at the same time serving up a familiar victory point and matching symbols puzzle game.

Even despite this, Call to Adventure: The Stormlight Archive is a compelling play, especially for those who love to tell stories and would appreciate its improv-style challenge. This is doubly true for the fans of Brandon Sanderson who would cherish such a beautiful depiction of his stories in art.

An easy sell for the fans of Brandon Sanderson’s work, Call to Adventure: The Stormlight Archive maintains and capitalises on the element that made this series stand out: its art. However, those who are interested in the character-building puzzles may find its gameplay a bit too simple.

TRY THIS IF YOU LIKED: CALL TO ADVENTURE

This standalone does not stray too far from the template that Call to Adventure has set out initially. If you enjoyed it, The Stormlight Archive gives more, set in a beloved fantasy world. 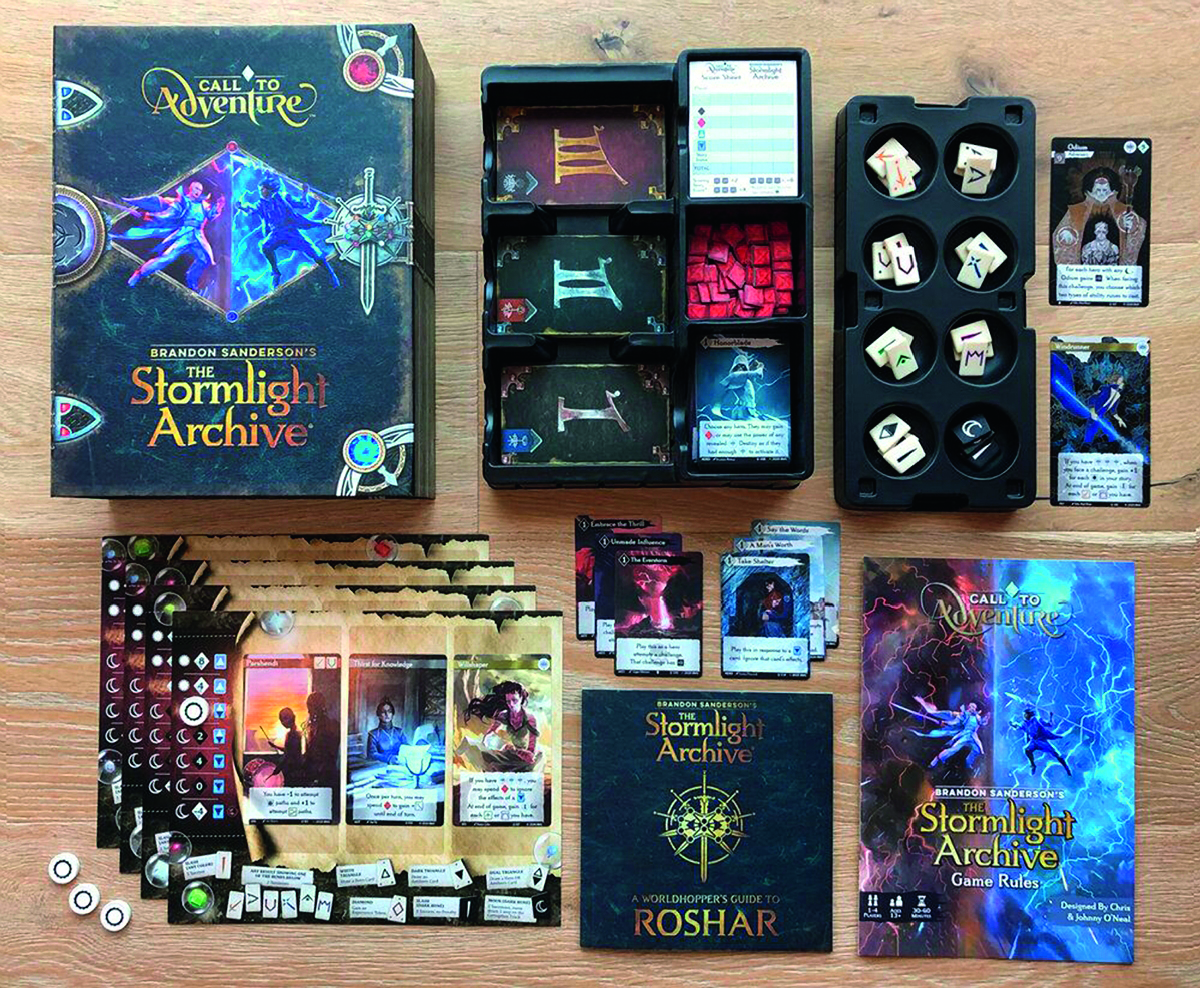