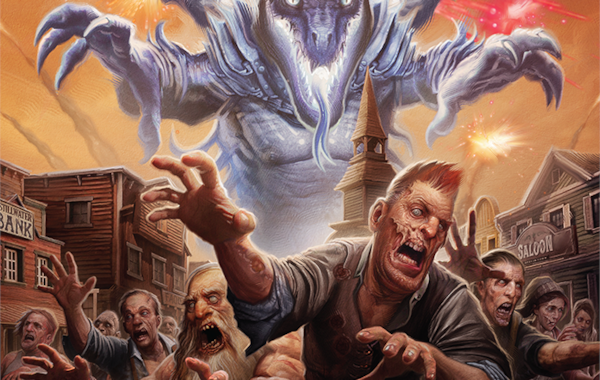 Call of Cthulhu: Shadows Over Stillwater

The Good, the Bad and the Weird

Lovecraftian horror and Wild West adventure don’t seem like the most natural of partners, but Shadows Over Stillwater manages to blend a spittoon-ful of their mis-matched tropes into a series of sandbox investigations. While their content is more solid than spectacular, the setting alone should be more than enough to keep your posse yee-hawing through a few entertaining months of Call of Cthulhu adventure.

Built with the Down Darker Trails setting in mind, the action all takes place within an isolated stretch of New Mexico in the late 1800s. The slim book captures a time of gunslingers, rustlers, brave lawmen and wild prospectors roaming the dusty red hills, and into this already wild and dangerous world pours an unhealthy dose of eldritch weirdness that ranges from insane snake-men to slumbering star spawn whose diabolical magics can prove as deadly as any outlaw’s bullet.

Again, this is weird. But reaching peak weirdness is one of the main aims of the Cthulhu games so it somehow works.

It’s the fiendish plotting of these snake-men that forms the driving force behind a short campaign set around the titular town of Stillwater, which forms the bulk of the book’s pages. While this technically consists of a trio of interlinked individual adventures you’d miss out on a lot of context and motivation if you tried to run them on their own.

The campaign opens with an entirely mundane hunt for a wanted murderer, but as the party explores the town they’re likely to stumble across a weirder sort of mystery involving unusual fireworks, unexplained illnesses and worrying tremors deep underground. The first few days in town are set up as a sandbox of shops and saloons, and for a while the players would be forgiven for thinking they’d signed on for more conventional cowpoke adventures rather than anything Lovecraftian.

As soon as the investigators start feeling comfortable, however, things start getting odd and the mystery truly begins. Soon the party is battling undead settlers and dealing with the fallout of mind-melting rockets on the small town they’ve been exploring for the past few in-game days.

From there the investigators are led into a series of battles with more monstrous foes, ending up with a series of battles in mountaintop lairs and even a volcano eruption or two if things go badly. It’s all action-packed stuff that lends itself to the swashbuckling adventure of the slightly tweaked Pulp Cthulhu ruleset, though this does tone does occasionally clash with moments where the smooth running of the plot depends on the heroes behaving with unusual restraint and care.

The second section of the book is devoted to a self-contained adventure set in the same rough area as the mini-campaign and, while it isn’t particularly long, it fits a hell of a lot into its runtime. Over the course of a couple of sessions the investigators will encounter almost every western cliché imaginable, all tackled with a wild sense of enthusiasm. There are bank robberies, horse chases and mysterious gunslingers around every corner, all of which are given a uniquely Lovecraftian twist. While the final scenes can be a little confusing, this compact journey is probably the highlight of the entire book and seems to be the perfect way to introduce newcomers to the setting.

On that subject, it’s worth noting that neither westerns nor the works of H.P. Lovecraft are particularly famed for their cultural sensitivity and, while the designers have tried to keep things vaguely respectful, there are still some aspects of Shadows Over Stillwater that folks might find hard going. Racism and intolerance may have been staples of the Wild West, but you may want to check in with your group before kicking off the campaign.

Shadows Over Stillwater is a decent little tome, albeit one that feels a little disjointed. If you feel like delving into the madness that is a Lovecraftian Wild West then it’s a great way to keep a group entertained for a few months – if the concept isn’t instantly appealing to you, however, it’s unlikely to ever win you round.

An entirely decent set of adventures in a weird Old West, with a handful of standout successes and a few weak points.