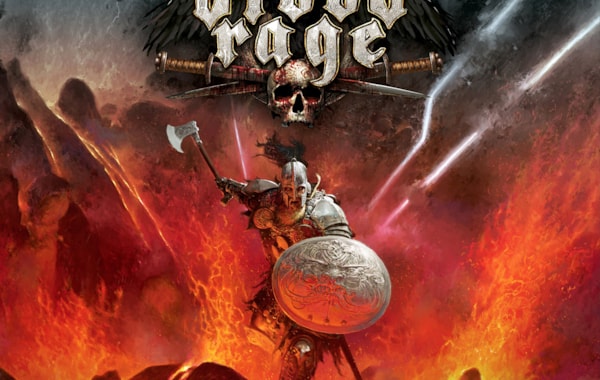 Owen Duffy finds out if the Viking board game brawler lives up to expectations.

Blood Rage is a game with some big expectations to live up to. Designed by Eric Lang, whose previous credits include Marvel Dice Masters, XCOM and the Game of Thrones card game, this Viking-themed game of apocalyptic warfare raised over $900,000 in a massively successful Kickstarter campaign, making it one of the most eagerly-awaited titles to hit shop shelves in recent years. And in a gaming industry where high-profile releases can often turn out to be disappointing damp squibs, Blood Rage lives up to the excitement.

The first thing you’ll notice when you unpack the game is the sheer, exquisite quality of its multitude of plastic miniatures, something that’s become a hallmark of publisher Cool Mini Or Not. The US-based company has previously released figure-heavy games including co-operative horror splatterfest Zombicide and chibi-themed adventurer Arcadia Quest. But while prior releases have boasted bold and characterful design, Blood Rage may be the company’s most beautiful game to date, with fierce-looking characters and impressively detailed sculpts that all come fully assembled, eliminating any need for faffing about with clippers, craft knives or superglue.

The premise behind the game is gleefully unsubtle. It’s Ragnarok - the apocalypse of Viking mythology. The gods themselves are preparing for their final battle, and soon the world will cease to be. You and your friends assume command of rival tribes of Norse warriors, and you want nothing more than to take your final chance to indulge in some pillage and slaughter to earn glory in the eyes of your gods.

This bloody spectacle plays out across a map composed of eight territories, all surrounding Yggdrasil, the great tree at the centre of the universe in Norse mythology. Each round of the game sees you deploy forces to the board, manoeuvre between provinces, embark on perilous quests and, most importantly, engage in brutal combat with your enemies.

But while this game is fundamentally and unashamedly about Viking-on-Viking violence, mechanically it’s more subtle than its wantonly destructive theme might suggest. The game begins with players on an even footing, controlling identically capable tribes of warriors. But you’ll very quickly start to diverge from your opponents, gaining new abilities, opening up new strategies and forging your own path to victory.

Each game round begins with a card drafting phase. You’ll create a hand of six cards representing gifts bestowed on your tribe by the gods. These come in a number of varieties, and all affect the game in different ways. Battle cards grant you strength in combat. Upgrade cards give your forces powerful new abilities. Quests represent tasks that your clan can undertake in an effort to win additional glory - the game’s markedly more dramatic term for what might more commonly be called victory points.

The cards you hold at the beginning of a round will go a long way towards deciding your strategy in the game, but they also serve to inject a lot of thematic flavour. Favours bestowed by Odin, the head of the Norse pantheon, grant you control over the battlefield, letting you even the odds in mismatched combats. Frigga, the goddess of wisdom, provides your tribe with much-needed additional resources. Loki, lord of lies and trickery, gives bonuses whenever you’re defeated in combat, letting you lure your opponents into attacking apparently easy targets only to discover that they’ve fallen into your expertly-laid trap.

This all leads to some tense, dramatic, unpredictable interactions between players - and never more so than in combat. Whenever a player decides to pillage one of the game’s provinces, any players with troops in the same area or an adjacent one can attempt to stop them. This kicks off a battle that can range in scale from a simple, head-to-head scrap between two players to a chaotic melee with everyone around the table pitching their forces into the fight.

The winner will gain victory points for vanquishing their foes. All other players involved will see their troops destroyed and dispatched to Valhalla, where they’ll remain for the rest of the round. And while in theory the player with the biggest, strongest army should win, in reality the special combat abilities bestowed by the gods make battles dangerous and impossible to predict.

Once players have taken all of their actions and resolved any combats, the round ends, but not before one of the provinces on the board is destroyed and removed from the game. Then, in an echo of the Viking sagas’ tale of the continuous death and rebirth of the universe, the whole process begins again. You’ll draft a new hand of cards, but this time you’ll use a new deck containing more powerful divine favours. You’ll send your troops to seek victory or a glorious death in battle, but you’ll have grown more powerful, able to field more units at any one time and with more actions available to take over the course of a round. You might even have recruited some of the powerful trolls, giants and other monsters available to cunning chieftains.

You’ll complete this process three times before the game - and the world - ends, and each successive round ramps up the intensity further than the last. Your forces will grow stronger, and with more provinces being wiped off the map, you’ll have a much smaller space to fight in. Battles become frantic, bloody affairs with players charging in with troops, throwing down cards and generally contributing to an atmosphere of confusion, death and disarray.

But while Blood Rage evokes the feeling of chaos, it’s actually incredibly well structured. It freely mixes elements of American and European design philosophies to terrific effect, and at times it feels like an amalgamation of the best bits of a stack of other games. The result is something that takes the essence of a sprawling, three-hour-plus strategy title and condenses it into a game you can play without setting aside an entire evening for the purpose.

It’s not without its weak points, though. While its plastic minis are beautifully crafted, one of the clans included sports the kind of ridiculous chainmail bikini battlewear that was already an embarrassment when it appeared in the roleplaying games of the 1980s. These days this Manowar-album-cover-style lowbrow titillation is likely to alienate more players than it attracts. And the release of multiple expansions at the same time as the base game might strike some players as a bit cynical - it does suggest that the £65 you’re paying for the base set isn’t buying you the full game experience.

Blood Rage manages to be simultaneously strategic, bloody and beautiful. It has enough depth to interest experienced strategy gamers and is accessible enough to appeal to more casual players just dipping their toe into more complex offerings.

Try this if you liked... Game of Thrones: The Board Game

Like A Game of Thrones, it neatly fills the middle ground between light strategy games and more complex fare.

This review originally appeared in Issue 4 of Tabletop Gaming. Pick up the latest issue of the UK's fastest-growing gaming magazine in print or digital here or subscribe to make sure you never miss another issue.