Pretty fly for a yokai

Y’know that part in Indiana Jones when they open the Ark of the Covenant and everyone starts melting? That was me prising open the box of Bitoku, mouth agape at the sheer volume of stuff contained within. Over 170 wooden counters, 14 double-sided die-cut pieces that slot into the board to fully complete it, in total there’s 565 components not including the board. 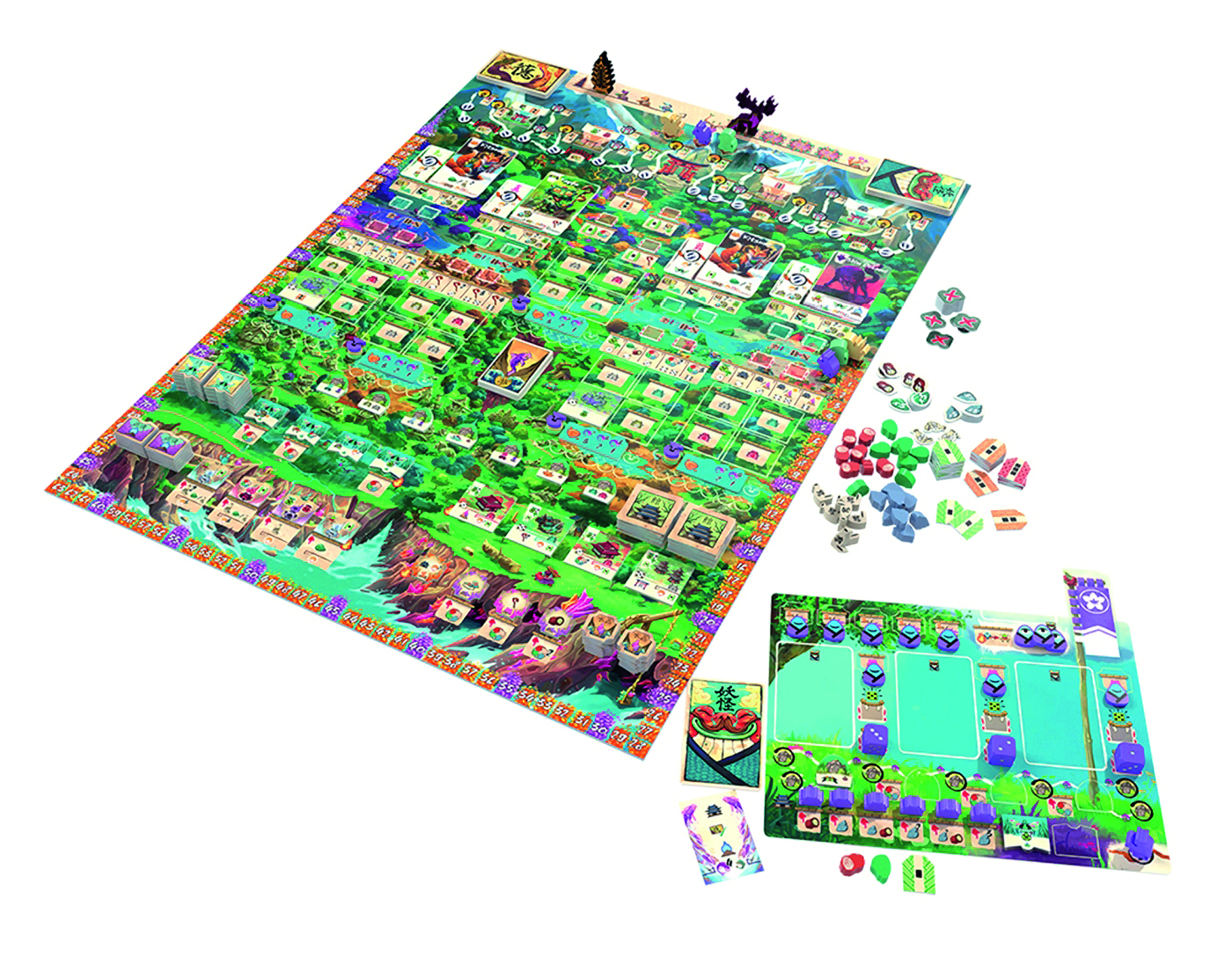 But thankfully, it’s also a very rewarding and delightfully designed board game set in a magical forest inspired by Japanese mythology for 1-4 players.

After reading the wonderfully laid out but daunting rulebook (which practically says “Don’t be concerned with the size” on the first page) or watching the succinct video tutorial (which again, constantly reinforces to not be worried) the actual game is straightforward (I’m saying, don’t worry).

The Great Spirit of the forest is seeking a successor, rewarding whichever player can prove themselves the most harmonious (i.e. most VPs) after four rounds of play. Players start their turn with a hand of Yokai cards and three dormant action dice. Each turn, players can either play a card for its power (usually gathering resources or letting you do a specific action) and activate an adjacent die, use said die in one of the four action spaces (provided the number shown is equal to or higher than any others placed) or moving a previously placed die across the river, reducing its power but gaining new cards or point scoring opportunities.

Each of the four spaces represents a different way to score points; perhaps you want to focus on combining spirits with dragonflies for immediate small benefits. Maybe you would rather spend time sending pilgrims out in the world to establish shrines or tend to Tori gates. Perhaps you’ll want to focus on constructing buildings onto action spaces, adding additional benefits for players selecting spaces (and rewarding you if an opponent uses said benefits) or gathering crystals to further boost your resources or score each round/card placement. Sometimes you’ll just need to grab more resources, snatching up saké and stone to fund your other actions.

No one system is obviously better than another, with players often steered onto one system or another through Iwakura rocks which reward you for gathering specific spirits, yokai or buildings or by seeking out scoring systems not being utilised by your opponents. Whilst the game has a massive variety of systems, you’re rarely focused on more than a couple of systems at any one time, with more focus going on fighting for spaces. While sneaking in lower value dice quickly will ensure you get to use them, many systems reward players with amulets that let you boost those values, but the higher you go the more reluctant your be to depower them, missing out on valuable cards across the river.

The variety of choices ensures early turns are a little slow as each player contemplates the possibilities, but thankfully increases in speed as players slowly grow in power and begin committing to their preferred systems. It’s fun to gather stacks of wooden resource tokens and build tableaus of beautifully illustrated cards, as you watch around the table enviously staring at your opponent’s equally appealing hoard of treasures.

While nothing mind-blowingly different from other dice placement or set collection games, if you can soldier through the vast quantity of components you’ll find a charming game that will absorb you for many hours of fun. Some may be scared away by how much there is to set-up, but if you love Japanese folklore or enjoy collecting a menagerie of cute critters, give this game a go.

Don’t be intimidated by the literal forest of cardboard and components, once you’ve set up the game it keeps a steady pace and is a rewarding experience full of colour and possibilities

TRY THIS IF YOU LIKED A Feast For Odin

Another game from the “absolutely massive but genuinely straightforward to play” school of game design, whilst Odin has considerably better storage and setup both titles are a delightful journey well worth the hours of play.