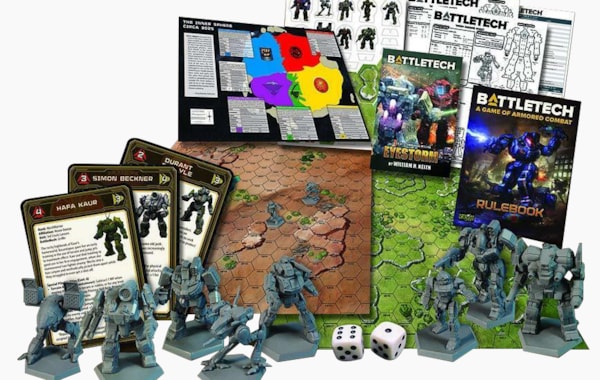 BattleTech: A Game of Armored Combat

Those 31st-century heavy hitters are back

Who doesn’t love a mech? From Gundam to Scythe, those titanic, battlefield-stomping, cannon-blasting robo-warriors have been a huge part of our gaming culture for decades. And, for many of us, our first taste of mech-piloting was BattleTech.

Published 35 years ago, it served up a rich and detailed space-operatic universe (think intergalactic Game of Thrones) while offering an attractive visual and thematic point of difference to the troop-heavy antics of Warhammer. It focused on fewer, bigger, more powerful units, but these weren’t just tanks with legs. You could get up close and scrappy with your BattleMechs, tearing limbs off your foes. And then pick those limbs up and use them as a club to deliver a head-crushing coup-de-grace. Ah, good times.

Well, for anyone of a nostalgic bent, those good times may be here again thanks to the latest re-release of BattleTech. There have been other iterations over the years – on PC and games consoles, as well as an RPG spin-off and the streamlined, more card-based Alpha Strike variation – but this is, if you like, BattleTech Classic. Which is both a good and bad thing.

Let’s start with the good. The worldbuilding is as detailed as ever, with the Beginner Box and regular set each even including a novella to get you in the MechWarrior mood. It’s an easy setting in which to immerse yourself even if you’re not willing to do all the lore-hoovering homework, and with its solid mech designs and attractive minis and standees, the game retains that vicarious thrill of placing you in the cockpit of a 30-foot-high robo-monster.

The careful management of your heat levels gives an added dimension to your strategic choices, meaning there can be dire consequences for going all-out with your particle projector cannons round after round. And there is a lot of fun in landing crits on your foes, then rolling to find out exactly how severely you’ve buggered up their precious Wolverine.

But there is a lot of rolling. Far too much, in fact. In this glorious, modern-day golden age of gaming, BattleTech’s unmitigated dependence on dice feels at best quaintly retro and at worst downright tedious. Add that to the fact that the gameplay requires turn after turn of declaring actions before then actually getting to execute those actions and, unless you’re an old pro, have perfect recall or just love fiddly arithmetic, you’ll find each battle dragging inexorably into thrill-sapping overtime.

It’s a shame. Diehard fans might argue that if you want it streamlined then there’s already Alpha Strike. But with a universe this detailed and engaging, you can’t help feeling publisher Catalyst should have at least made some effort to modernise this old favourite in its core form. As it is, once you set your nostalgia aside and get over the cool minis, the gameplay feels about as elegant as an Atlas with a giro hit.

You can’t fault the setting, but BattleTech’s old-school appeal has firm limits, which makes its mechanisms feel anachronistic on the modern tabletop and off-putting to newcomers.