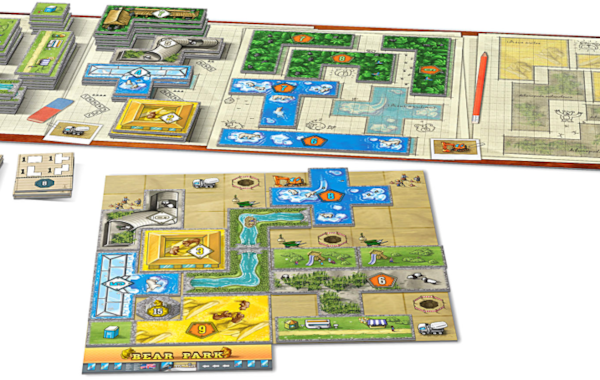 If you’re a fan of the Tetris-like practice of skillfully positioning tiles on a board, you’ve been spoilt for choice when it comes to games of the last few years.

From the head-to-head intensity of Uwe Rosenberg’s Patchwork to the twee charm of Cottage Garden by, urm, Uwe Rosenberg, or the complex, crucial arrangement of epic Viking saga A Feast for Odin… wait, that was Rosenberg, too. Well, the master of tile placement might now have to clear a polyomino-shaped space for Sushi Go creator Phil Walker-Harding and his latest design: the enchanting, delightful Bärenpark.

Bärenpark hits the adorable factor from the off, as players throw open the doors to their own bear park (the various starting boards translate the title into Russian, French, Japanese and more) and begin to acquire tiles of various shapes and sizes from the central supply board.

Covering certain icons – scaling from wheelbarrows and cement mixers up to diggers and entire construction crews – presents the chance to pick up new tiles (or, in the case of the latter, a brand new area board) that represent everything from toilets and playgrounds to the main attraction of bear houses and unique enclosures.

The game ends after a player completes four areas, before points for special tiles, completely filled boards and any achievements – which include placing certain types of matching bear tiles, laying a continuous river or completing multiple boards at once – are scored and a winner declared.

With such easy-going and forgiving gameplay (not to mention the adorable animals), Bärenpark is a perfect family game for four, but it works just as fantastically with a couple. That’s not to say it lacks bite, either – while the tile arrangement is less intense than in a typical Rosenberg game, there’s a satisfying amount of strategy and player interaction that arises from nabbing extra points by being the first to acquire certain tiles, fill boards and complete achievements. The achievements are said to be an optional variant for those more familiar with the game, but we’d say they’re vital to offering that extra level of depth and strategy – plus, they’re not that hard to understand anyway.

The simple-but-sweet gameplay is underpinned by a warm, charming art style. As the sandy emptiness of your park disappears under the blue tones of polar bear enclosures, the yellow of gobi bear houses, the luscious green of koala habitats and the silver of panda tunnels, you’ll smile as you plug a gap with another portaloo.

A few matches in, you’ll likely be able to knock out a game in under half an hour, bringing the same charm, ease and friendly pull-out-and-play appeal to tile placement that Sushi Go brought to card drafting.

The only letdowns are outside of the main game. There’s an unfortunate misprint on the supply board regarding the number of playground and food street tiles for different numbers of players, which is a shame – but not a dealbreaker by any means. While it’s thoughtful to include an insert of any kind in the box, the simple interlocking one used here is a little awkward and hardly ideal for storing the various shapes and pieces, making setup a little longer than it could be. Even then, it’s never more than a couple of minutes.

If you come to Bärenpark expecting a deep, headscratcher of a tile-placement game, you’ll be disappointed – Uwe remains the place to go – but if you’re instead after a quick-to-learn, quick-to-play game that still has depth to offer alongside its irresistible visuals and fun theme, you can’t really go wrong here. Let it wrap you in its bear hug and simply enjoy the loving embrace.

It might not be the deepest game around, yet Bärenpark is packed with more than enough charm and joy to be an absolute blast. Like Sushi Go, it’ll be a game you find yourself bringing out time after time for a delightful half-hour – before you end up playing for hours, with no complaints.