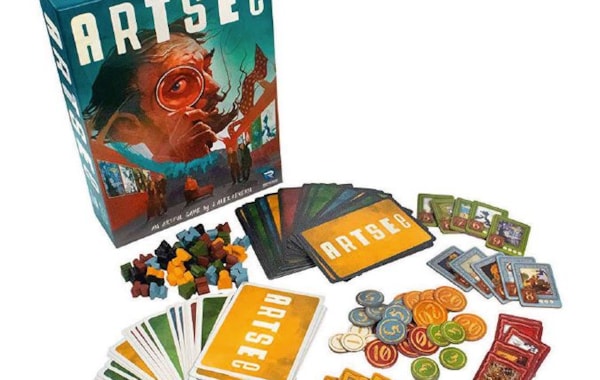 Buy your copy of Artsee from us here.

I hate that title. It’s clever-clever and doesn’t tell you about the game. It took me a couple of days to realise it’s a pun on ‘artsy’ – except with ‘see’ because this is a game supposedly about seeing art by attracting people to the gallery you’re running, by having a better collection of interesting paintings than your rivals. And it sort of is, except for one glaring problem: it’s not about the art.

There’s no shortage of games about paintings recently. Atelier: The Painter’s Studio gives you the chance to create some of the world’s great masterpieces (or, at least, pay penniless students to create them for you) and they’re lavishly illustrated on tarot-sized cards. ArtSee also has masterpieces but they’re the size of postage stamps. “Is that a still life or a portrait?” one of the players asked at one point. “I know it’s a still life,” I said, “because the tile has a blue background.”

So you’re a gallery owner, with a small gallery of two cards and a hand of three. Cards have colours, but more importantly they have two or three paintings on them, a combination of blue and/or yellow and/or red and/ or green. On your turn you draw, place a new card in your gallery, score it – which may mean other players benefitting too – try to buy a masterpiece and re-draw.

For a game with a five-part turn it zips along at a good speed. The trick is that each coloured card you place has an arrow pointing left or right, and when you add it to your gallery on an existing card or to the left or right of one – you score for all the paintings of that colour in the column the arrow points to. However, if you place a card on the left of your gallery with a leftwards arrow you score for the righthand column of your lefthand opponent’s gallery, and vice versa.

This is a really smart mechanic in a game that’s full of them. It means careful players will build towards the middle, not the sides, at the risk of limiting their scoring chances. I was fairly sure there’s an optimum gallery shape but my testers kept
proving me wrong.

It’s not all about laying the right colour in the right place, because each card has other effects. If you play a red, every other player can put one of their meeples (tiny but beautifully carved) on the front red cards in their gallery. When they add another
card to that column they remove the meeples and score prestige for them, because this is the sort of game where points are called prestige.

Very quickly you’ll realise how carefully intertwined and balanced the different actions and systems are. Every card you place has multiple implications, and you should watch every action your opponents make up to and including drawing a new card, but you never feel overwhelmed by choices. It’s a rounded and satisfying experience.

The only problem is that at no point will you feel like you’re the owner of an art gallery. The theme is a convenient wrapper around what at heart is a clever abstract. It does need a theme, and the world of art ought to be a good fit, but the pictures on the cards are so tiny that they could have been almost anything. But then this isn’t a game about art, it’s about prestige. ArtSee is definitely clever, but more engagement with its theme would have made it something really special.

Buy your copy of Artsee from us here.