Ankh, the third instalment of Eric Lang’s mythology trilogy, devised in part from the books on myth he read as a child, is a daring and divisive finale. There are two games here to review – the two player experience, and the three-plus player experience – each with their own flavour, and some elements which might be an acquired taste.

But before that, we should take a moment to admire the huge god-miniatures that players will be taking control of, the wonderful sculpts of the guardian monsters, the sand-grass-water hex board that does – for maybe the first time in gaming on hexes ever – look really appealing. The game is a thing of beauty, the coloured faction moulds almost make it a shame to paint them – as many will be doing immediately. If you’re in for the plastic, then you need read no further. 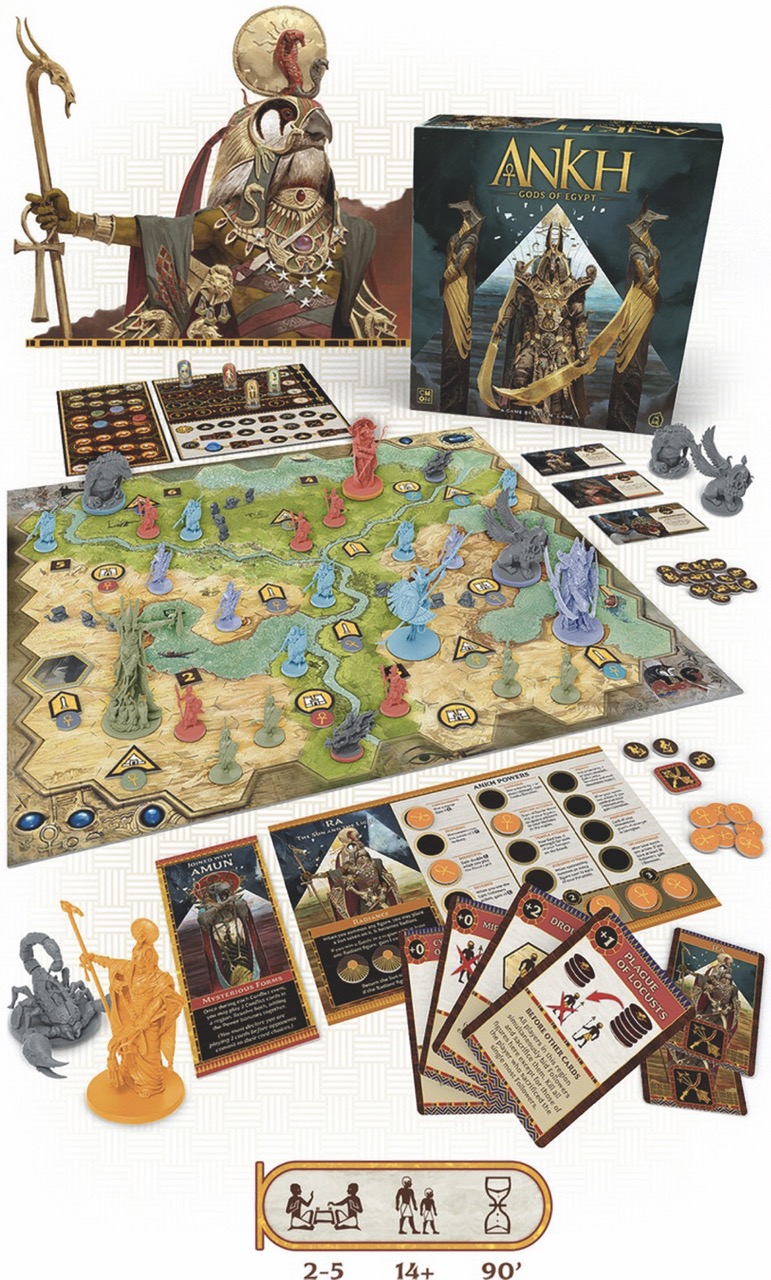 It’s still a game of controlling areas, getting some big monsters, and having a war every now and again. The core loop is taking up to two of four action – move, summon, gain followers (currency), and unlock ankh powers – with the second action having to be further down that list than the first. Each of these moves a shared action tracker along, and when one gets to the end of its row players will either capture monuments, resolve conflicts, or divide regions depending on the symbol on the board. It’s classic Lang in the sense that it’s ultimately a very simple game with big choices, and all of the other moving parts are more or less status and memory aides.

Conflicts are solved through having the most power (gods and warriors are worth one by default) plus bonuses from the set of eight cards (which everyone has the same set of). These cards are the heart of the game in a lot of ways, played cards remain face up in front of you until you play the Cycle of Ma’at card to pick them all up again. The choice between playing attack-increasing cards can be ruined by your opponents playing a plague card, which might wipe everyone else out if they bid enough of their followers. It’s reminiscent of things like The King Is Dead, where your limited choices encourage real strategy. You have to take the long term view of being a god to accept a loss here for a win somewhere else.

These conflicts are resolved in the order of the regions as they’re numbered. This leads to tactical creation of new regions – claim an empty new region ahead of the next conflict and you might gain some dominance points for having no one to fight, or just turn the odds in your favour. Creating these regions happens every time you hit a camel on the event track – where the player that triggers the event gets to place some ludicrously well designed and moulded little camels (there’s three different sculpts if you can believe it) and divides up any region they like, swapping the order tokens if they desire.

Winning is, still, a points game – Ankh has the same Euro-disconnect as its older siblings – where you might think you’re playing something like a wargame, but in reality, it’s more about making sure you’re able to score points as you go. It’s a synthesis of Blood Rage and Rising Sun, the conflicts are meaty in the way of Blood Rage but you require the diplomatic head of Rising Sun to be able to pull off a win.

As a two player game, it’s an excellent tug of war. It’s got everything you want from an Eric Lang game. It’s got a real 'let’s have another go' feel to it which will keep you coming back for more. These two player game can be done and dusted in 45 minutes if you’re an experienced pair, and as such, it’s a Must-Play for those with a regular gaming partner who wants a ludicrously good looking game to play.

But then we get to the friction on Ankh. There’s no true consensus on if the three-plus player games works.

If you’re the trailing god before the last conflict, you will merge with the player ahead of you. You’ll lose your armies and temples, but you and the other player will now control the same pool of resources and powers – both taking turns with them.

Once this happens players have one of two reactions – the first is that they’ve been eliminated, and that the game is over for them. The second is that they, now formed as a conjoined god, wield much more power and can make a comeback. Smart players will be watching their position on the devotion track and plan out with the god they’re going to join with and can manoeuvre to make the most of it. On the other side of the table, while this is happening there can be other reactions. Some players feel the joined gods are overpowered. Some feel they’re weak – understandable as they’re in the catch-up position. Our groups had both losses and wins as the merged gods, so there’s really no hard and fast truth to these feelings.

We liked the merging – it formed new bonds around the table with new dynamics. The merged god is faster and more flexible – its downsides emerge from players not working together. For those readers who have played a normal game as a ‘team game’ before, it feels a lot like that, but with a perk. And if you come to this part of the game with an open heart, then you’re going to get a lot out of it. If however, you have players in your group who immediately turn their noses up at the idea, well, they’re going to get exactly what they expect from it too.

With that, and the fact that players are so divided on this mechanic – which we must stress lasts for the final act of the game only – is its own kind of balance. The merge remains an innovative idea, and one that many players will get behind – and we wouldn’t be surprised if it’s something that starts to sneak into other games as a catch up mechanic. Embrace the sudden asymmetry and the power boost and Ankh will move ever closer to divinity.

As a two player game, Ankh is godly. At three and above it might come out in an argument with ungenerous players. If however your group likes to be surprised and can withstand the sudden turn in the final act of the game, then Ankh: Gods of Egypt might end up being your favourite of the trilogy.

TRY THIS IF YOU LIKED Rising Sun…

While this game has much in common with both its siblings, Rising Sun’s cool head is going to get you to the top of the devotion track quickest.