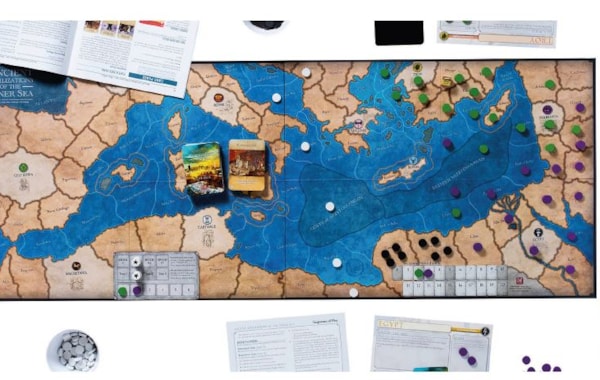 Brutus has nothing on this

Buy your copy of Ancient Civilisations of The Inner Sea here

Ancient Civilizations of the Inner Sea comes on a bit strong. It has a name as dry and dusty as the history books its millennia-spanning depiction of almost 4,000 years of human civilisation draws from. Its main map is two expansive boards, easily filling most tables with its brown and blue humdrum. There are no epic miniatures, fancy components or frame-worthy illustrations – just a deck of cards, some wooden blocks and discs. Lots and lots of discs. It even has a rule named after the mythological Grecian hero Aeneas, for crying out loud. At a glance, it seems a wargame designed by committee or neural network; if the words ‘Mare Internum’ don’t get you chomping at the bit, you wouldn’t be forgiven for passing it by as just another ‘one of those’.

That’d be your loss because, underneath the fairly plain and drab surface, ACIS is one of the most riotously entertaining and downright savage take that games in a long while.

It’s a game of rising and falling civilisations, built off the timeless blueprint of the genre’s seminal forebear, 1980’s Civilization. Each player’s discs stack up in the regions around the Mediterranean, building from single-tier camps (which can co-exist peacefully with other factions’ tokens, in an abstract representation of wandering farmers and traders) to double-decker settlements that provide extra discs on future turns and threestorey cities that generate victory points. Combat is mostly a war of numbers: most discs wins, with the option to modify the outcome with ability cards and discard cards instead of sacrificing discs. It’s simple and effective enough as a basic strategy game, but far from the highlight.

That’s the boring but necessary bit. It’s in the game’s central card phase that things kick into overdrive. ACIS’ cards are a maelstrom of constant chaos, inviting players to unleash everything from floods, volcanoes and earthquakes to barbarians and the Black Death on their opponents. The ferocity of the cards is almost hilariously dialled up to and beyond 11 discs are removed as quickly as they’re placed, and you’ll often build one of the game’s world wonders only to find it reduced to rubble moments later. If you’re after a fair and balanced chinstroking strategy experience, this ain’t it.

The take-that-ness of the game will make it an acquired taste for many, but get on board with its unbridled bedlam and you’re in for a hell of a ride. As far as historical reenactment goes, this is the equivalent of dressing in a toga for a boozy party. As such, the chaos does unravel the costume at points; while the game’s asymmetrical player civilisations introduce an illusion of sticking to history, the random nature of the events means there’s little sense of progression through the eras.

The odd duck nature of ACIS’ smooshing together of epic wargame and snappy (and stabby) party game leaves a few other loose ends. It’s a game literally measured in epochs in other words, despite the quick- flowing individual rounds (of which there are between two and four each epoch) it can run seriously long, especially with more people. Don’t let that put you off, though; the game can be neatly truncated to a couple of hours by reducing the number of epochs played or playing to a point limit, losing little in the process. Plus, the map and gameplay scales comfortably to smaller groups although the need to set up both sides of the table-swallowing board regardless due to the fixed score and epoch tracks is a bit of an oversight.

Don’t mistake ACIS’ fairly breezy core rules for an overall lack of depth, either. This is a game that comes with a surprisingly thick playbook full of historical scenarios both multiplayer and single-player, ranging from the fall of Rome to a solitaire challenge that casts you as the God-King of Egypt. There are optional variants galore to mix in as you please, as well as advice on crafting custom scenarios the impressive level of
customisability makes a great, fun game even better.

And that’s what ACIS is, at the end of the day: fun. If the idea of a historical wargame that doesn’t take itself too seriously is up your street, there’s likely enough looseness here to make ACIS the game you want it to be. Grab some friends, tie a bedsheet toga around your waist and embrace the chaos.

Buy your copy of Ancient Civilisations of The Inner Sea here