We can't lie about your chances...

It’s always seemed odd that Ridley Scott’s seminal sci-fi horror film Alien has spawned a range of child-friendly merchandise. Like as the “Xenomorph Swarm” action-figure battle set, for example, or the (Walmart-exclusive) “Deluxe Alien Queen”, complete with “Internal Jaw Hissing Attack!” With its bleak outlook on humanity, its queasy body horror and, the twisted, phallocentric design of the creature itself (thanks Giger!), there is nothing about Alien or its sequels that screams, “Y’know, for kids!”

In contrast, the movie’s tabletop spin-offs have up to now largely stayed true to its 18-certificate roots, whether in RPG form, as the Legendary Encounters deckbuilding game, or the recent miniature skirmish title Aliens: Another Glorious Day in the Corps. But with Alien: Fate of the Nostromo, Ravensburger and designer Scott Rogers appear to have kids who play with Xenomorph Swarm sets in mind as much as they do gamers who grew up with the movie. 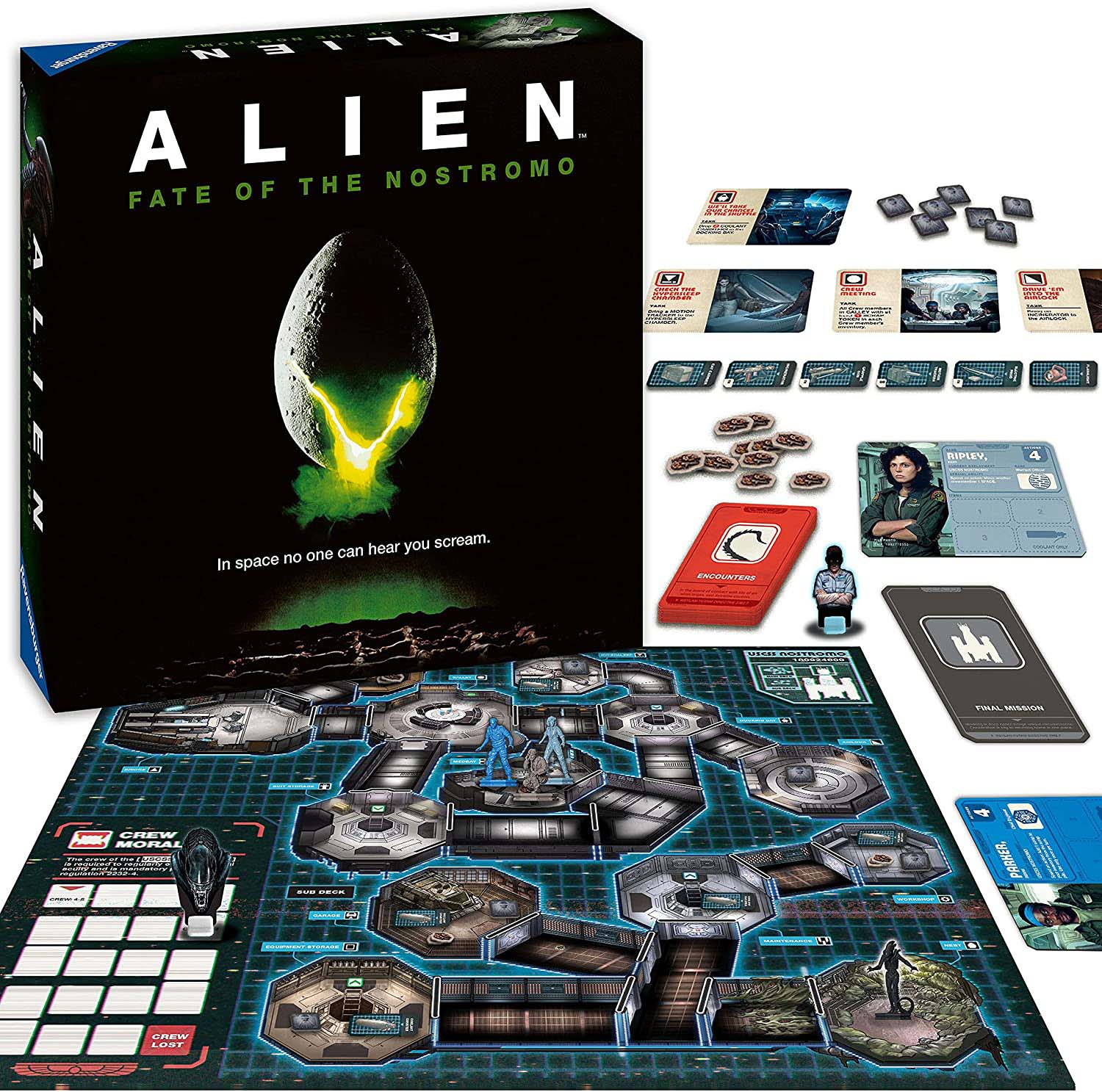 The setup will be as familiar to players of light co-op survival titles as it is to fans of the film. Each player takes a character with its own ability (Ripley can move another player on her turn; Parker can add one scrap – the game’s currency – to his inventory, etc.), and must collaborate to fulfil a set of objectives before the alien stalking their ship, the UCSS Nostromo, does away with them all.

However, this being a child-friendly production, there’s no actual killing. If that troublesome xenomorph lands on your space, it merely forces you to flee to a different location and move the crew’s morale marker down the morale track (which loses you the game if it gets to zero). While this has the advantage of avoiding player elimination, it does make the game feel dissonantly bloodless.

Of course, that is a relatively minor thematic niggle. What’s more surprising is that, for a title which allows such young-player-including bloodlessness, it is remorselessly challenging. Your precious morale is eaten into all too easily with the turn of an encounter card – and that’s even when you don’t play on ‘Hard Mode’ by adding in the treacherous robot Ash to throw obstacles your way. As each game progresses, the encounter deck thins in a way that leaves the least-nasty cards in the discard pile, while reshuffling all the most horrible encounters. So you must move very quickly to complete your objectives (the number of which scale up with the player count), before the encounter deck forces you to fight fires at the cost of anything resembling progress.

This can prove frustrating, even for seasoned players who may be lulled into a false sense of security by the game’s light rules and accessibility. However, there is always the flip side that a win – pulled off through the tightest of teamwork and maybe a bit of luck with the cards – feels hugely satisfying. Especially as each game neatly climaxes with a randomly drawn final mission, such as “Blow it out into space”, or “We’re going to blow up the ship”. These effectively replicate the race-against-time tension of the movie’s final act, even if its facehugging, acid-blooded, brain-eating antics are kept off the table.

Die-hard fans of the film might not appreciate its family-friendly thematic concessions, but it is a challenging co-op game that is likely to see players demanding a replay after each defeat.

From its accessible, rules-light co-op play to its ‘horror for kids’ tone, you could almost call Alien: Fate of the Nostromo “Horrified on a spaceship”. 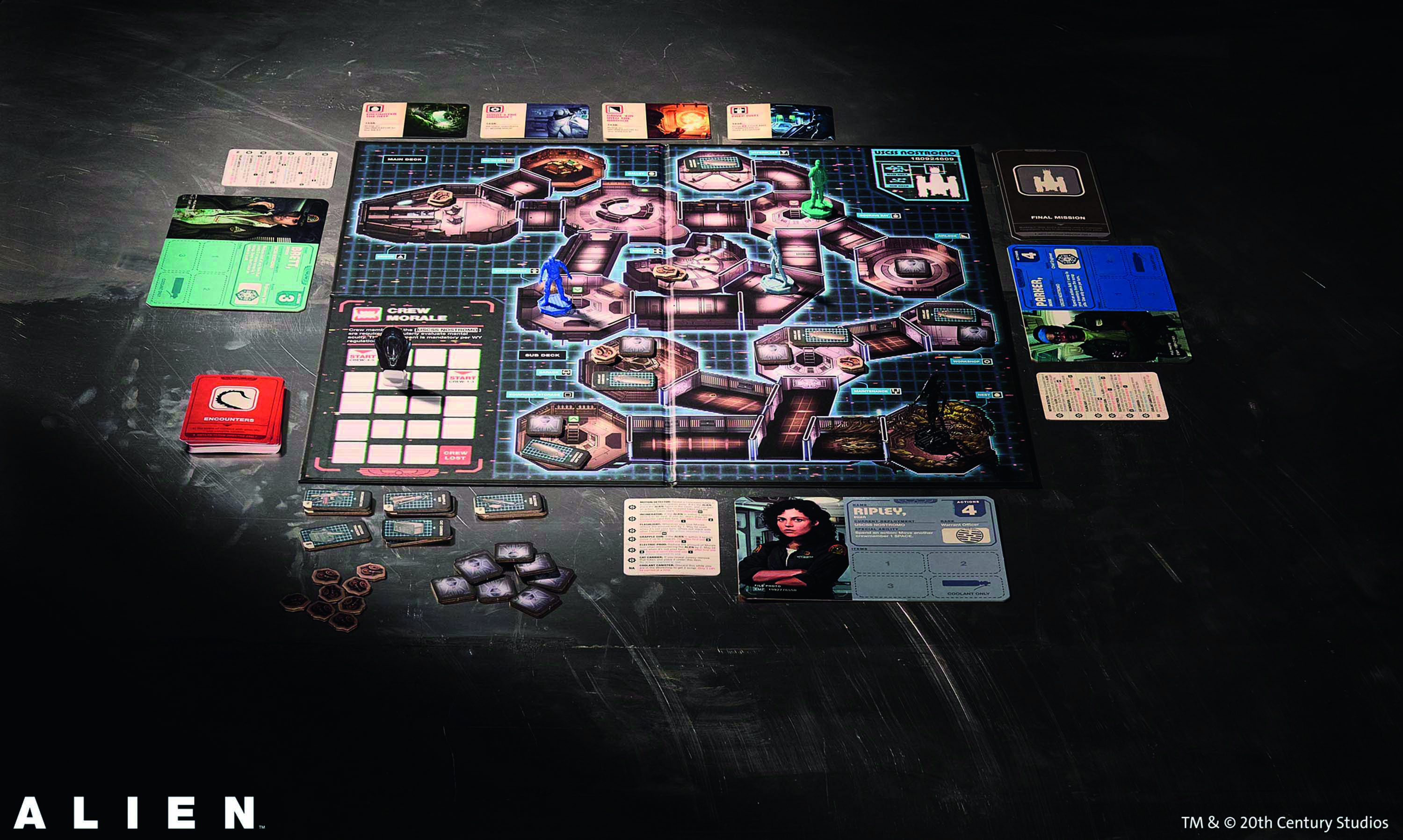